From Airline Conferences to Tattoo Conventions, Everything’s Being Canceled in Hong Kong 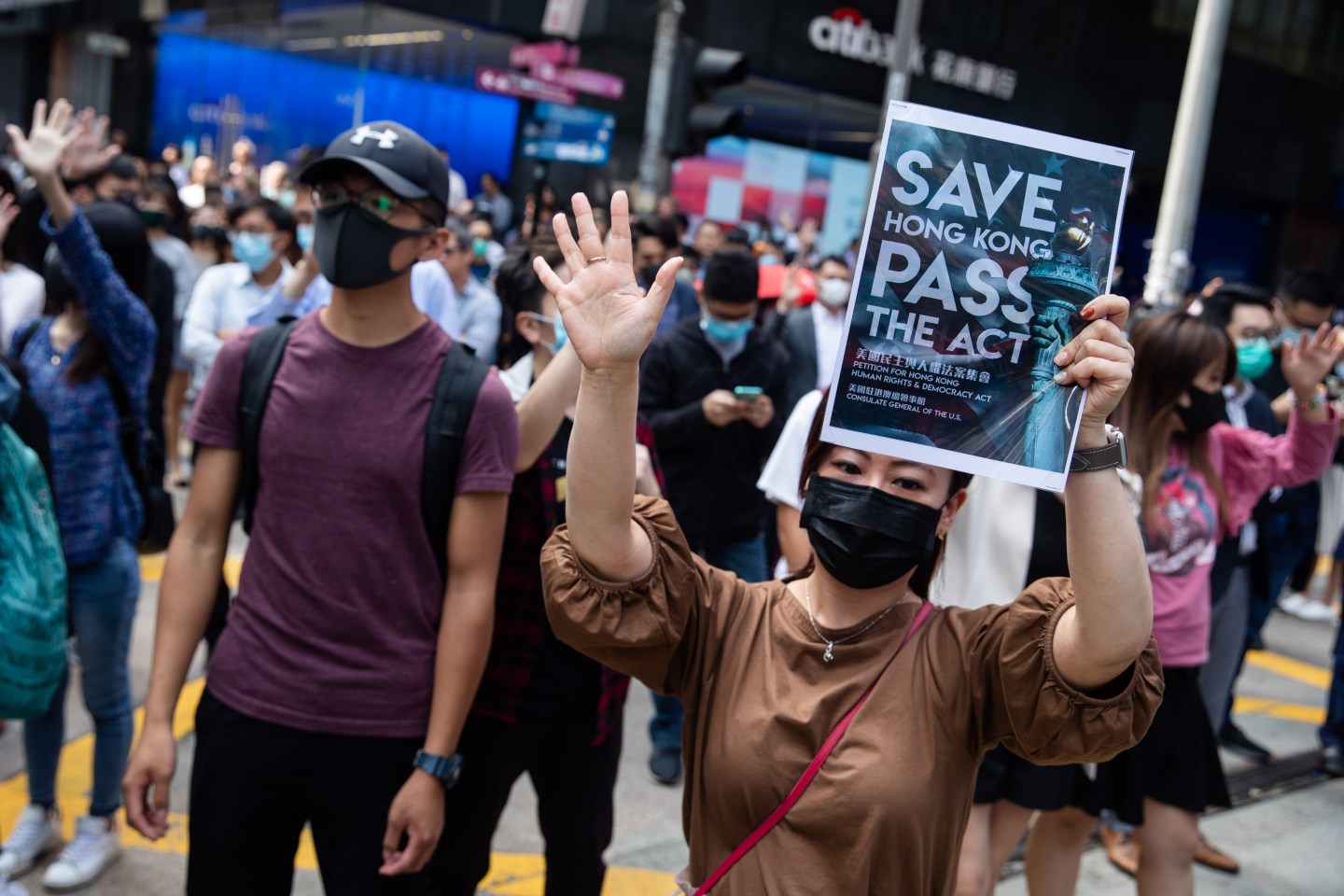 A demonstrator gestures "Five Demands" as she holds a placard during a protest in the Central district of Hong Kong, China, on Nov. 14, 2019. Hong Kong has seen many violent days since the unrest began in June, but the disruption this week has taken things to a new level -- and fears are growing as to what may come next. Photographer: Kyle Lam/Bloomberg via Getty Images
Kyle Lam—Bloomberg via Getty Images

A major airline conference co-hosted by embattled Cathay Pacific Airways Ltd. became the latest high-profile event to be pulled in Hong Kong because of the months-long protests, which have battered the city and threatened its status as a regional hub.

The unrest has torpedoed events from fireworks displays and theater shows to sports tournaments, a Pride parade and an international tattoo convention. Organizers have blamed the protests, saying the safety of participants is paramount. The Association of Asia Pacific Airlines joined the party exodus Wednesday, when it aborted a gathering of executives planned for Hong Kong next week.

Cathay Pacific was going to co-host the AAPA’s 63rd Assembly of Presidents, which rotates among the 15 member airlines each year. It’s another blow to Hong Kong’s flag carrier, which Wednesday said inbound passenger traffic in October slumped 35% from a year earlier and warned that its second-half financial results would be “significantly” lower than the first due to the city’s troubles.

“This was a very difficult decision, given our commitment to organize this important industry event, but reflects the unpredictability of the situation in Hong Kong,” AAPA Director General Andrew Herdman and Cathay Chief Executive Officer Augustus Tang wrote in a joint statement.

Hong Kong is enduring what could be its most turbulent week since the protests began in June. Running battles between masked protesters and lines of armed police have become a common sight across the city, including the Central business district and around university campuses, where makeshift barricades of traffic cones, garbage bins and bamboo pile together on roads littered with broken glass. Clouds of tear gas fill the air when clashes intensify.

The scenes have prompted organizers to reconsider events, however prestigious or lucrative they’ve proven to be in the past. Last month saw the cancellation of the city’s annual Oct. 1 fireworks display, which was extra sensitive as it marked the 70th anniversary of Communist Party rule in China. The PGA nixed a golf tournament, the Hong Kong Tennis Open was axed, as were plans for a monthlong run for the musical Matilda.

Even though it was months away, organizers canceled the Formula E-Prix race weekend due to take place on the central harbourfront at the end of February, according to reports. That is about a month before the biggest event on Hong Kong’s sporting calendar: the Hong Kong 7s, a raucous rugby tournament that attracts big-spending fans from around the world. The ticket ballot for the 7s is due to open this weekend, organizers said.

“The tournament is still five months from kick-off, but we are monitoring the situation and are in close communication with all relevant stakeholders, and our preparations are proceeding apace,” Hong Kong Rugby Union CEO Robbie McRobbie said.

Nearer term, there’s no sign that Hong Kong’s most high-profile annual music festival — Clockenflap — is under threat. Tickets are on sale for the Nov. 22-24 event, which this year features artists including Mumford & Sons, Lil Pump and King Gizzard & the Lizard Wizard. The Kooks pulled out though because of an injury.

“Every year we face different challenges with regard to security and audience safety,” the Clockenflap organizers said on the event’s website. “This year’s situation has been fully assessed according to strict international guidelines as well as liaison with all relevant local and international parties.”

The disruptions stretch beyond just events. Schools have been ordered shut, CFA exams have been postponed and employees have been urged to work from home.

The cancellations are piling up. Among those lost just this week: the Oxfam Trailwalker, a 100-kilometer (62-mile) race across the New Territories, and a Wednesday horse-racing meet run by the Jockey Club in Happy Valley. Hong Kong Pride Parade, the annual LGBT event that includes sponsors such as JPMorgan Chase & Co., American International Group Inc. and Goldman Sachs Group Inc., canceled its Causeway Bay-to-Central parade scheduled for Saturday, a Pride spokeswoman said. Organizers will still have an assembly in Central, she said.

The scrapping of so many events is a further drag on tourism numbers, which are sharply down in recent months because of the unrest. Visitors from mainland China, who typically make up the bulk of arrivals and help lift Hong Kong’s retail sales, have fallen especially hard because of the anti-Beijing mood of protesters and fear of repercussions.

The value of Hong Kong’s retail sales tumbled 18% on-year in September, based on the latest official data available, while visitor numbers dropped 34%. The government is due to release final third-quarter economic data Friday afternoon, and a 2.9% contraction is expected.

The government last month announced incentives to provide relief for the tourism industry, including handing out about HK$100 million ($12.8 million) to travel agencies, but the continued loss of public and corporate events and the rush of violence is stoking concern that Hong Kong’s situation is set to worsen.

“What we are witnessing is very worrisome,” lawmaker Yiu Si-wing said.