How to Cure the Antibiotic Industry’s Profitability Infection 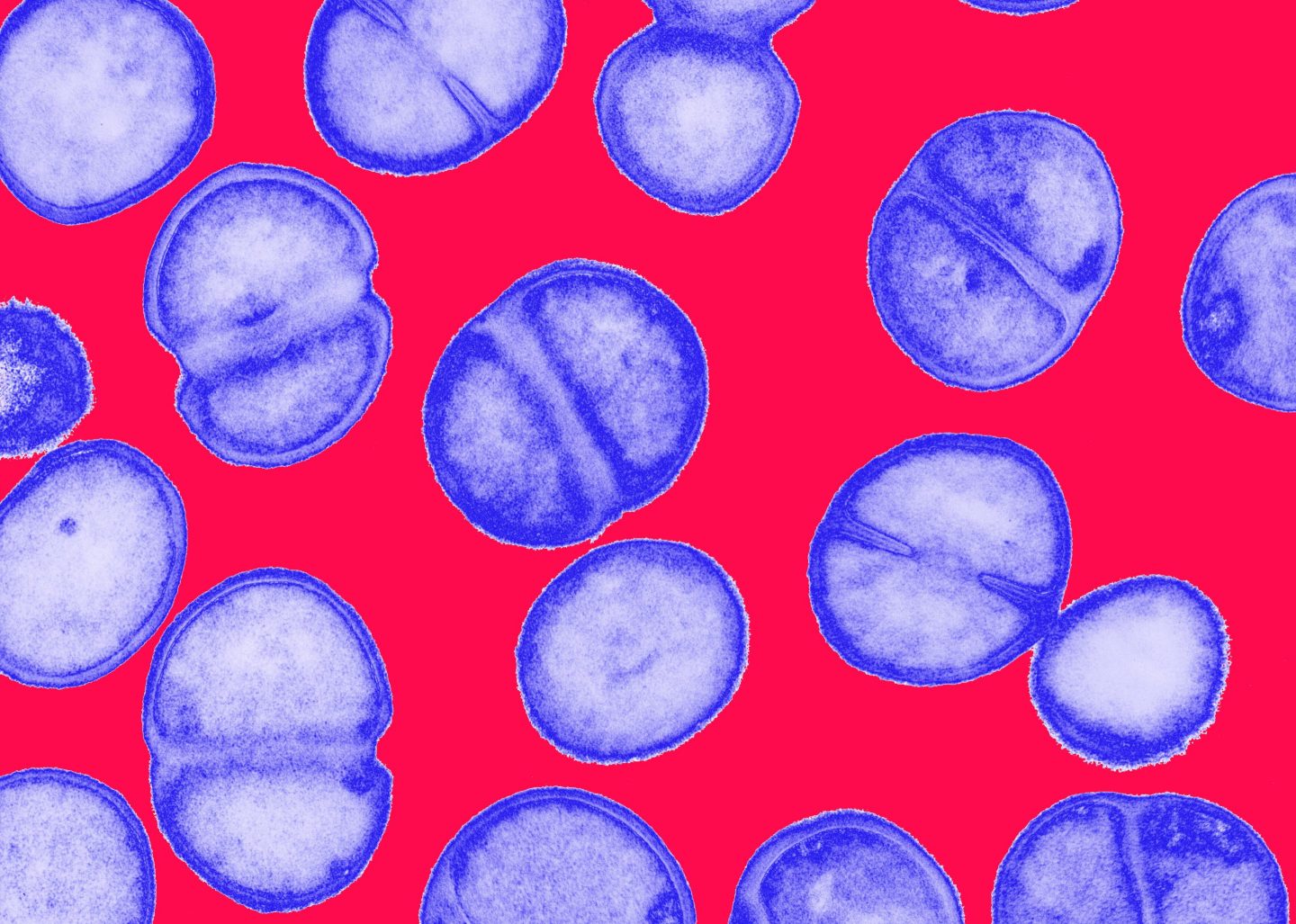 MRSA bacteria. Coloured transmission electron micrograph (TEM) of Methicillin-resistant Staphylococcus aureus (MRSA), a Gram-positive, round (coccus) bacterium. It is resistant to many commonly prescribed antibiotics. S. aureus is carried by around 30% of the population without causing any symptoms. However, in vulnerable people, such as those that have recently had surgery, it can cause wound infections, pneumonia and blood poisoning. The spread of MRSA can be prevented by health workers washing their hands between patients and before procedures. Magnification: x23, 000 when printed 10cm wide. BIOMEDICAL IMAGING UNIT, SOUTHAMPTON GENERAL HOSPITAL/SCIENCE PHOTO LIBRARY
Biomedical Imaging Unit, Southampton General Hospital/Science Photo Library—Getty Images Plus

This June, a group of biotech representatives converged on San Francisco. They had come to bid on the assets of pharmaceutical company Achaogen, which filed for Chapter 11 bankruptcy in April. When all was said and done, the top bidders walked away with virtually all of the company’s assets for $16 million.

A pharmaceutical company having to close its doors, in itself, is not necessarily uncommon or newsworthy. But Achaogen’s was not a typical biotech bankruptcy story.

As recently as July 2017, Achaogen had a market capitalization of over $1 billion. (Venrock invested in Achaogen in 2004.) More importantly, Achaogen had succeeded in discovering and developing an FDA-approved antibiotic to treat serious, drug-resistant infections. Furthermore, its drug was the first antibiotic to ever receive breakthrough therapy designation from the FDA.

Meanwhile, on the opposite coast, Boston-based antibiotic maker Tetraphase is now also struggling after a similar track record of success. Like Achaogen, Tetraphase has developed an FDA-approved antibiotic for drug-resistant bacterial infections—a herculean feat. It once boasted a market cap of nearly $2 billion but now sits at a market cap of under $10 million.

Kevin Outterson, executive director of CARB-X, a partnership dedicated to accelerating innovation in the antibiotic space, issued the following statement to Endpoints News this summer: “[Antimicrobial resistance] companies are in free fall and urgent action is needed to stop the collapse of the sector.”

While the general public is increasingly aware of the growing toll of antimicrobial resistance, few outside the biotech community are aware of this other, commercial crisis facing the antibiotic sector.

Why are “successful” antibiotics companies like Achaogen and Tetraphase finding themselves in commercially untenable situations? It boils down to two problems facing new antibiotics: low volumes and low price points.

The first driver, low volumes, is due in part to stewardship of new antibiotics; doctors are reticent to prescribe a new antibiotic for drug-resistant infections before they know patients need it. In addition, most antibiotics, unlike many other medicines, need to be added to hospital formularies, which can require three or four rounds of review from the hospital. The result can be negligible sales for the first several years after the launch of a new antibiotic.

The second factor, low price points, is the result of how antibiotics are reimbursed. When a patient is admitted to a hospital with an infection, the hospital receives a lump sum known as a diagnosis-related group (DRG) payment. This covers all the care the patient receives while admitted, including the antibiotics they are prescribed.

In response, VC interest in new antibiotics has dwindled. According to an analysis by the Biotechnology Innovation Organization, a trade group representing the biotech industry, venture funding for companies developing novel antimicrobials totaled around $600 million from 2009 to 2013. During the same time period, companies developing neurology medicines raised a total of $1.7 billion in venture funding, and oncology companies secured $4.2 billion in venture investment.

How do we go about fixing this case of misaligned incentives? One possibility is legislation. The bipartisan DISARM Act, put forward in 2018, proposes to remove antibiotics from the DRG. Specifically, it would allow Medicare to offer an add-on payment to hospitals that use a qualifying DISARM antibiotic.

A second piece of bipartisan legislation, the REVAMP Act, aims to grant companies that develop crucial new antibiotics vouchers to extend their exclusivity. Another company could then buy that voucher to secure additional exclusivity for its own product.

Pediatric priority review vouchers (vouchers for conditions affecting children) can be used to estimate the price points one might achieve for antibiotics vouchers: A number of pediatric vouchers have sold for over $100 million.

Given these numbers, a voucher program would, in essence, provide a cash prize to allow the antibiotic developer to weather the slow sales uptake in the early years post-approval. This would provide critical funding during a period when a company’s spending typically exceeds its revenue.

Passage of either the DISARM Act or the REVAMP Act could significantly incentivize the development of new antibiotics. But the unfortunate reality is that—at the moment—combating antibiotic resistance is not a high priority for either political party. This needs to change if there is to be any hope of fixing the market forces that make it so challenging to develop new antibiotics.

If one side of the equation is fixing the marketplace, the other is bolstering our pipeline of new antibiotics. Senior FDA official Janet Woodcock has described the current antibiotic pipeline as “fragile and weak,” driven in large part by the lack of investor interest described above.

A weak pipeline is particularly problematic when one considers typical biopharma timelines: It can easily take 10 years or more to develop a new medicine.

Government and philanthropic groups like the Department of Health and Human Services (HHS) and CARB-X are funding companies to advance the development of new antibiotics. CARB-X has secured some $500 million in funding from the U.S. and U.K. governments and philanthropic organizations such as the Wellcome Trust and the Bill & Melinda Gates Foundation.

This money is critically important but—in reality—likely not sufficient. To understand why, consider this: Achaogen received nearly $150 million in funding from HHS’s Biomedical Advanced Research and Development Authority (BARDA) to progress its antibiotic through phase 3 clinical trials. Even this level of government funding was not enough to carry the company to commercial viability. The combination of low volumes and low price points proved insurmountable.

In order to rebuild our antibiotic pipeline and defend against mounting antibiotic resistance, companies will need capital from government and nonprofit organizations. But this funding is not enough. We must also fix the marketplace that has made antibiotic development so challenging in the first place.

If new antibiotics continue to be reimbursed at disproportionately low price points—and prescribed to a very small number of patients—developing these medicines will remain commercially untenable. Nonprofits and the government will likely need to support companies not only in the process leading up to FDA approval, but also in the years afterward when revenues are meager.

This would represent a shift in how the government has historically incentivized drug development, but antibiotics have proven to be in a class of their own. Failure to address this problem in a timely manner would undermine our country’s (and the world’s) preparedness for the next wave of serious, drug-resistant infections.

Megan Blewett is an investor at the venture capital firm Venrock.

Bob Kocher is an investor at Venrock, a senior fellow at the University of Southern California Schaeffer Center, and an adjunct professor at Stanford University.

Bobby Shady is the chief growth officer at Renew Health.

—How businesses can build on ”Me Too” progress
—Is your company an innovator? These 5 traits make the difference—U.S. CTO: How America achieved “quantum supremacy”
—Treat social risk like any other risk to avoid business disruptions
—Klaus Schwab: End economic short-termism by keeping score
Listen to our audio briefing, Fortune 500 Daily