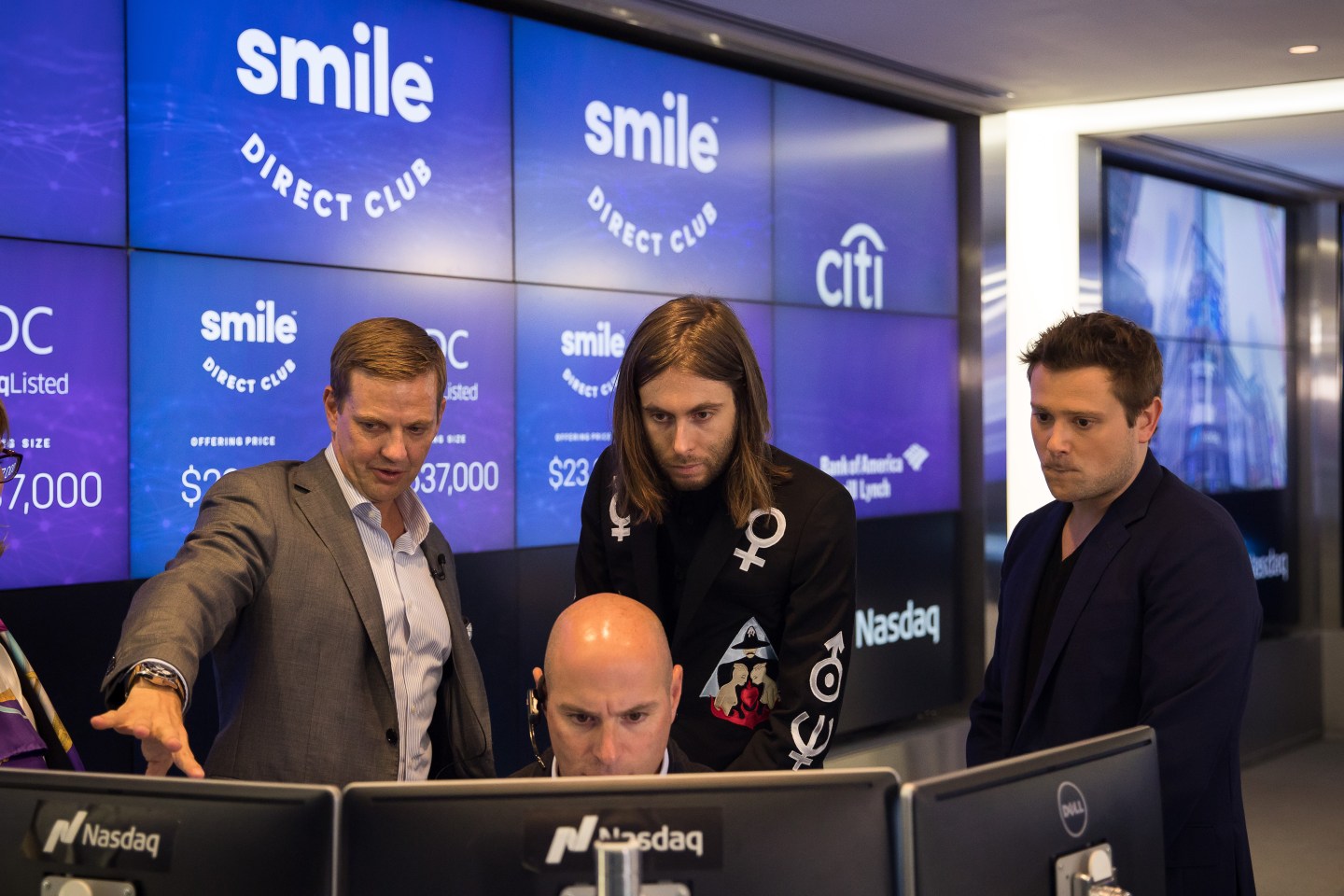 Investors couldn’t muster a grin for SmileDirectClub’s first earnings as a public company, as the stock dropped as much as 10% in after-hours trading Tuesday despite a revenue estimate beat.

The teledentistry company’s 3rd quarter earnings (their first report since one of the worst IPO debuts in recent history, trading down some 28% on its first day) reported revenues of $180 million versus $165 million Wall Street estimates. Yet SmileDirect’s losses widened, with the company reporting a loss of 89 cents per share (compared to an estimated loss of 87 cents per share). The online dentistry company’s losses grew to a net loss of $387.6 million, up from $15 million in the year-ago quarter.

All things considered, SmileDirect’s revenue bump of 51% from the year-ago quarter—plus a gross margin approaching 80% for the quarter—have some analysts optimistic. “More than anything, it’s just hitting numbers” for Jefferies’ Brandon Couillard, noting he’s looking more at continued gross margin improvement in the upper 70s (SmileDirect’s 3rd quarter hit 77%). The company shipped 106,070 teeth aligners in the 3rd quarter (up from 72,387 in the year-ago quarter).

But SDC, which uses 3D images or impressions of a customers’ teeth to create customized clear aligners, has struggled with regulatory concerns (particularly in California, but also in Georgia and Alabama), as more requirements like orthodontic patients needing new X-rays before receiving care could hamper the “teledentistry” model SDC uses. The company declared they’re on the offense.

“We don’t feel that this does anything to our model, but we are going to debate it with the governor and other bodies of legislature,” SmileDirect’s CEO David Katzman told analysts on a call. “It’s just not right as far as access to care, which is what our company is founded on, but … we’re fully in compliance.”

Still, the stock hasn’t been making too many investors show their pearly whites as of late. SmileDirect is off some 50% from its debut in September. When it comes to the regulatory challenges, “at the end of the day, a lot of these things aren’t going to be resolved anytime soon,” Couillard told Fortune. SDC executives acknowledged the regulatory climate would be a multi-year battle. The company has launched a national and international lobbying effort (which doubled legal expenses in the 3rd quarter compared to the 2nd, and are expected to increase still in the next quarter).

Yet Wall Street largely remains positive on SmileDirect’s fundamentals, with a 100% “buy” rating on the stock, according to Bloomberg data. “[The company’s] valuation relative to other high valuation healthcare businesses is at a substantial discount,” Jefferies’ Couillard suggests. “I think at the end of the night, folks can begin to focus back on fundamentals and valuation again, which hasn’t been part of the conversation recently.”

The upside? SmileDirect is expanding into new international markets—including New Zealand and Ireland which are “growing quickly,” the company says—and announced partnerships with insurers UnitedHealth Group and Aetna, in addition to plans for a new manufacturing lab in Texas to continue bringing manufacturing in-house.

The company’s stock closed Tuesday at roughly $11 a share—quite a gap from its initial trade at $23 two months ago.

—Bankers want investors to ignore these Saudi Aramco IPO concerns
—The recession debate has turned to how high this market can go
—How “VSCO Girls” are killing makeup sales
—Harbinger Ventures is bringing “female DNA” to venture capital
—A.I. vs. the wolves of Wall Street
Don’t miss the daily Term Sheet, Fortune’s newsletter on deals and dealmakers.