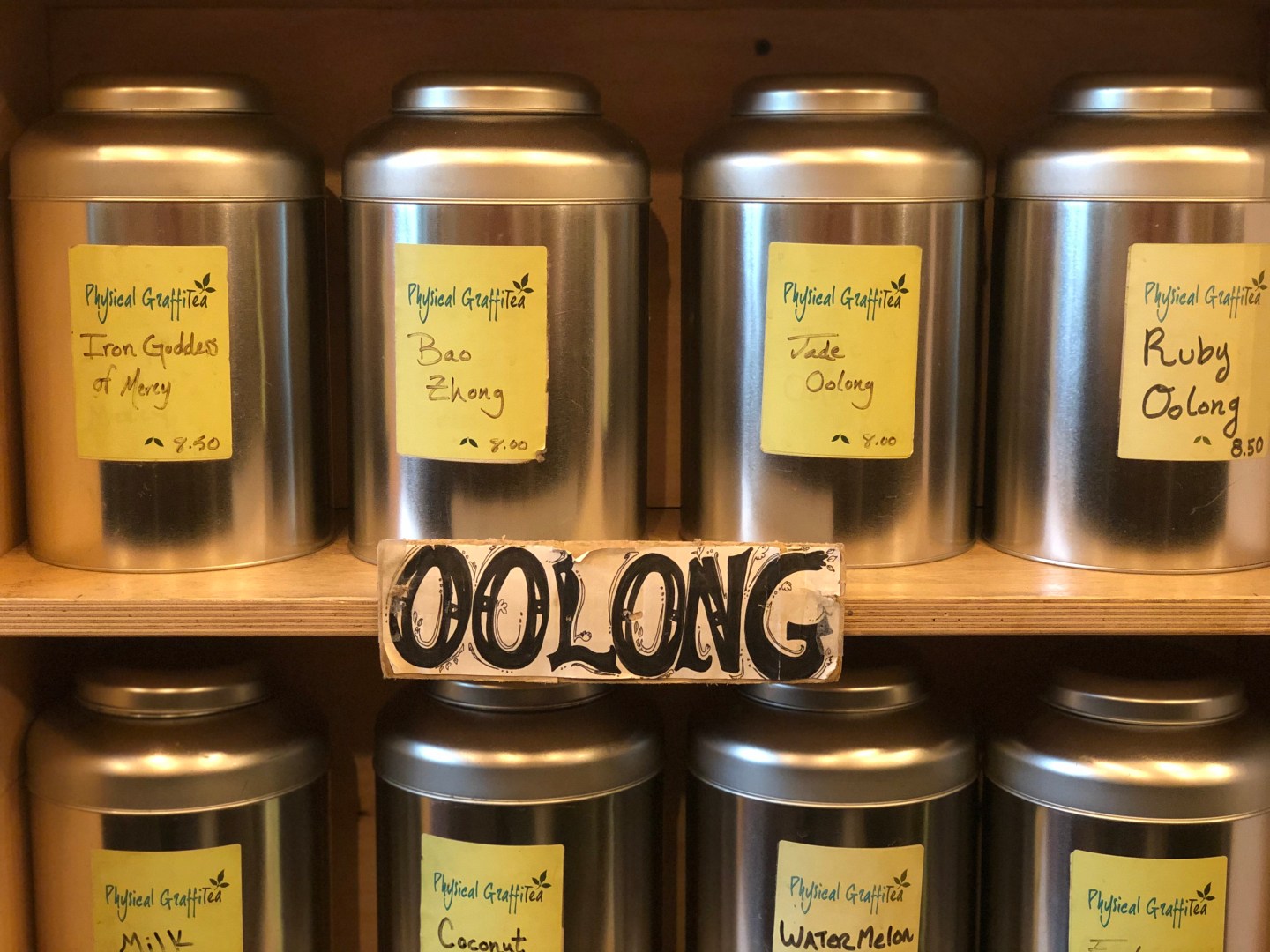 Found in the heart of the East Village, a neighborhood that feels like one of the last vestiges of a New York City of days gone by, Physical Graffitea is a tea shop whose history is as interesting and varied as the over 200 types of teas that customers can discover within it.

That history kicks off in 1994, when Ilana Malka, then a sales executive in the credit card industry, opted to step away from her corporate job to open up her own vintage clothing store.

Scouting for spaces downtown (“I think vintage was more popular [in that area],” she says), Malka eventually landed on one on the ground floor of a historic building: the locally dubbed “Physical Graffiti” building that appeared on the 1975 Led Zeppelin album Physical Graffiti.

“I chose the name for the store, Physical Graffiti, because of the Led Zeppelin album,” Malka says. “At that time, it really fit the purpose. It was a song from the ’70s, and the clothing looked like the graffiti, in a way.” Her favorite Led Zeppelin song? “Stairway to Heaven,” she answers.

Although helming a relatively successful business, the birth of her daughter and an eventual downturn of the economy had Malka thinking of how to diversify and possibly incorporate yet another one of her passions—tea—into her work scheme.

“That was my next dream,” Malka says. “To open up, in addition to my vintage clothing shop, a tea store where people can come and experience and learn about tea and its benefits.”

After a year of searching for the ideal location and falling short, the entrepreneur decided to close the clothing store and repurpose the space as a destination for current and would-be tea addicts. “I just simply packed it up,” she says. “I didn’t even announce it or did a sale. I just packed it up and stored [the clothes] very nicely and renovated.”

It was 2011, and Physical Graffitea was open for business.

The store’s name—a name so apt it seems like it was Malka’s destiny to own the shop all along—comes with an origin story: “While I was looking for a name, we were folding the vintage clothing, and my little girl was there,” Malka says. “We were just throwing out names [and] my daughter says, ‘Why change the name? Why can’t you just call it graffitea?’ And that’s how it began.”

Originally from Israel, Malka opted to stay in New York after traveling throughout Europe and the United States. But her businesses aren’t just some of the purest displays of the successful achievement of the American dream, they are manifestations of her very own passions—a fact made clear by the palpable excitement she exudes when showcasing her obvious expertise in all things tea. From her concocting her own blends to her teachings about the origins of tea, Malka certainly knows what she’s preaching.

“Well before I opened, I did my homework,” she says. “I always dreamt of how I would make my teas, how I would prepare matcha, how I would educate the public.”

In pursuit of that education, Malka’s sales come with a side of tea-related lessons. Whether looking for a potion that will aid your anxiety, sleep deprivation, or fertility issues, she will teach you how to properly prepare the brew at home and what, exactly, to expect from each cup. “A bunch of doctors all over town send people to us all the time for things like sleeping, weight loss, cholesterol, allergies, arthritis,” she says.

A few things you should know before selecting your tea: Don’t expect to be buying tea bags, as all of Malka’s products are sold in loose-leaf form; she does sell empty bags for you to take home. Also, consider trying out the many herbs and medicinal blends on offer.

Customers can even opt to indulge in a properly prepared cup of tea in the store itself, a space striking upon entry: Rows and rows of tea canisters marked with names like Margaret’s Hope, Pomegranate Hibiscus, and White Peony line the walls.

“The [store] is very tiny. It looks like a café, but we are specifically a tea store,” she says. “We don’t have food from outside, we don’t have a bathroom, we don’t do Internet. It’s really for people to come and drink tea and read their book and sit for a minute.” Each tea is served alongside a timer and a set of instructions detailing how long to let it brew for and how to pour yourself a cup.

Some of the autumnal specials on the tea menu.
Physical Graffitea

Although located smack-dab in the middle of St. Marks Place, a string of city blocks that seem to hold on tight to a pre–social media past, Malka is aware of the demands of a business in the 21st century, which is why, in addition to offering her products online, she set up a curated tea program that folks can sign up for to receive four different blends each month.

But don’t get her wrong, most of her sales are done in-store, and Malka is happy to keep it that way: “I don’t do anything for social media. I just don’t have time,” she says while acknowledging the huge potential for business expansion if she were to deep-dive into the online world. “If you come to the store, you’ll notice that it is succeeding, and it’s because it’s all about the little details. At the end of the day, it’s about how to make a good drink from a good tree—and that’s about it.”