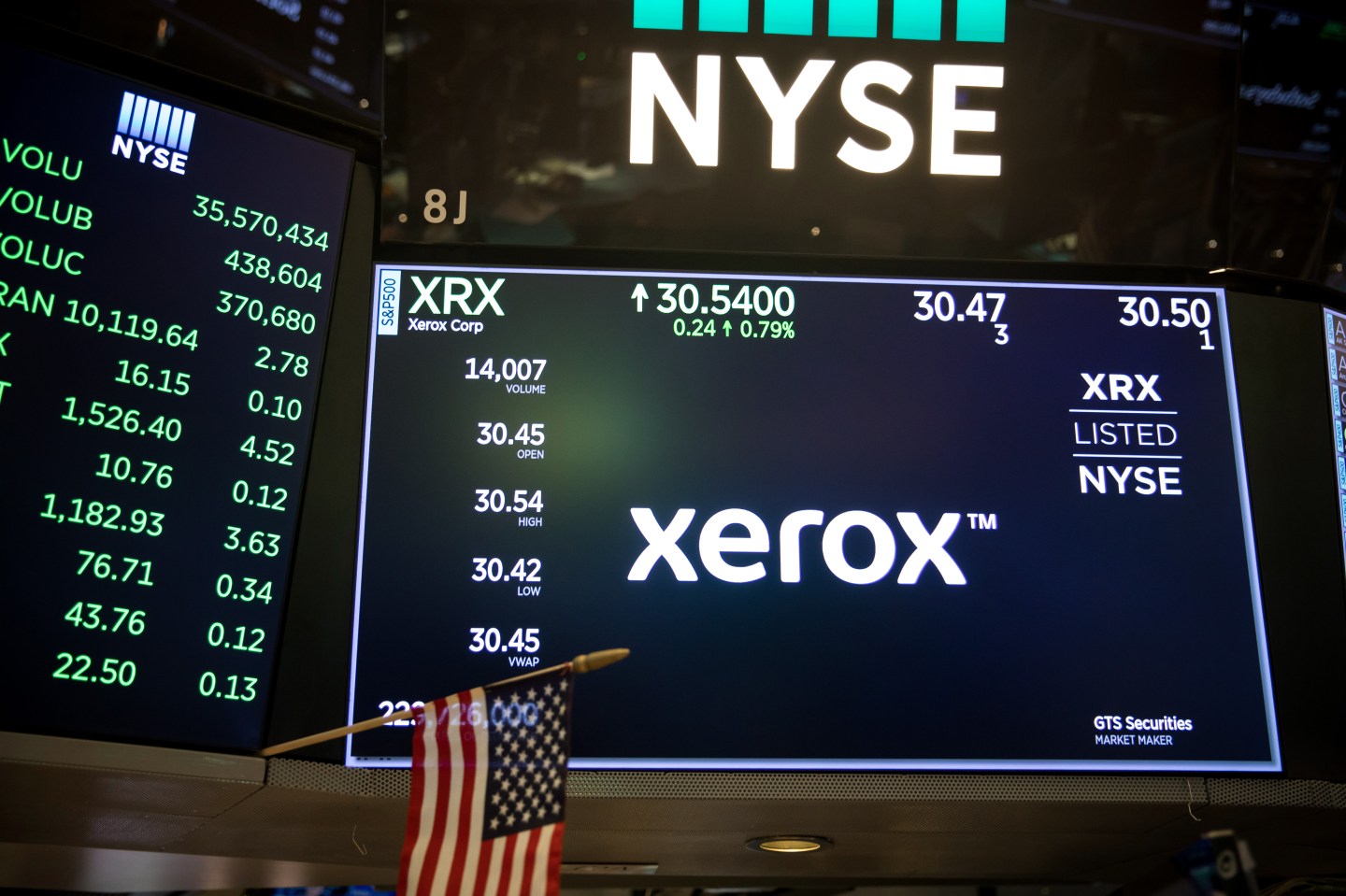 A monitor displays Xerox Corp. signage on the floor of the New York Stock Exchange (NYSE) in New York, U.S., on Monday, March 11, 2019. U.S. stocks bounced back from the worst week of the year, as chipmakers rallied on deal news and the latest retail-sales data boosted confidence that the economy isn't headed for a downturn. Photographer: Michael Nagle/Bloomberg via Getty Images
Michael Nagle—Bloomberg via Getty Images

Xerox Holdings Corp. is considering a cash-stock offer for the $27 billion PC giant HP Inc., the Wall Street Journal reported, a deal that could combine two of the biggest American names in office hardware.

Xerox’s board met Tuesday to deliberate a deal that could result in $2 billion of annual cost savings, the newspaper cited unidentified people as saying. While there’s no guarantee the company will follow through, any offer would value HP at a premium to its market value, the Journal reported. Representatives for the companies weren’t immediately available for comment after regular business hours.

Xerox, which a day before agreed to jettison a slice of a venture with Japan’s Fujifilm Holdings Corp. for $2.3 billion, may be angling to take over the world’s largest maker of personal computers after China’s Lenovo Group Ltd. Any deal would buttress its share of the printing and copying market, which has been hard-hit by the global move toward cloud computing and other internet services.

It’s unclear how Xerox — a name synonymous with the copying industry — intends to finance the acquisition of a company several times its market value. Xerox has already secured an informal funding commitment from a major bank, the Journal reported, on top of proceeds from the sale of its stake in Fuji Xerox.

HP itself, once an icon of American technological innovation, is struggling in a plateauing PC market with the advent of smartphones. The company, which appointed a new chief executive officer just last month, aims to slash as much as 16% of its workforce as part of a restructuring meant to cut costs and boost sales growth amid its first change in top leadership in four years. HP’s printing business, a major source of profit, has seen falling sales and recently was dubbed a “melting ice cube” by analysts at Sanford C. Bernstein.

—“Secret” recession signs may provide clues to when the next downturn is coming
—The HENRYs—high earners, not rich yet—may finally be having their moment
—A recession may not be likely, but a ‘semi-recession’ is. Here’s what that means.
—Bill Gates talked to high schoolers about the secrets to success. Here’s what he said
—A.I. vs. the wolves of Wall Street
Don’t miss the daily Term Sheet, Fortune’s newsletter on deals and dealmakers.