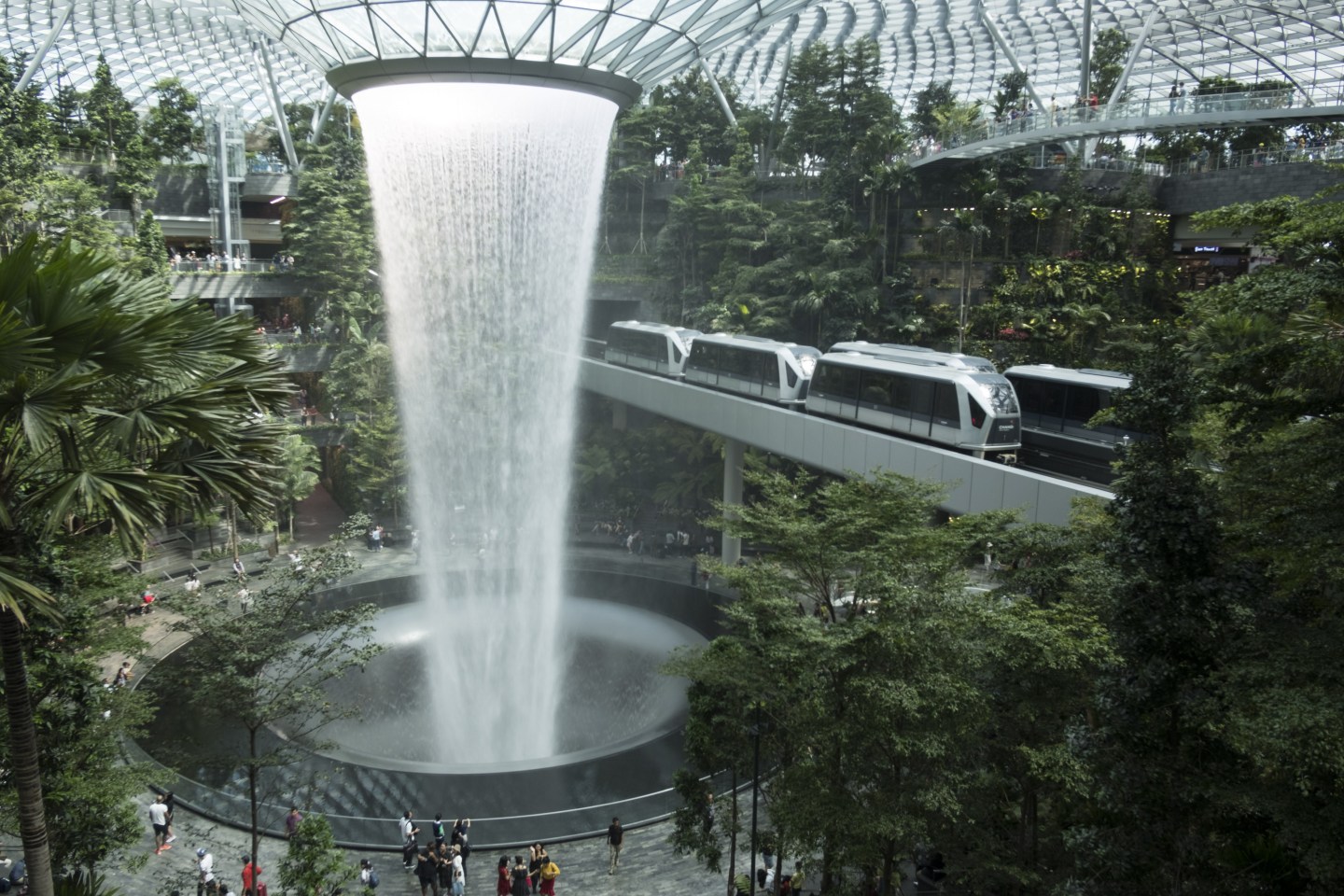 Few things discombobulate travelers more than a layover, that stretch of time between one flight and another, when formerly comfortable garments start to cling and itch, when a sense of place evaporates along with your confidence in knowing the correct time. (Is it the one on your watch or the one on your phone?).

When layovers must be endured, they are usually done so begrudgingly—in an airline lounge or curled up in a corner by an electrical outlet. But that’s not how layovers go at Singapore’s Changi Airport, which is deploying technology in ways meant to surprise and delight bleary-eyed travelers—and, sure, get them to their next boarding gate on time.

In terminal four, a Ripple Maker 3-D printer etches selfies onto the foam in complimentary espresso martinis. In terminal two, Pepper, a three-foot tall robot sommelier, tools around, politely prompting passersby to answer a few questions so she can better guide them through the selection of duty free wine (“Which do you generally prefer, dark fruits or citrus fruits?”).

Thirty two more robots, Zamboni-sized and painted to look like squat, dapper butlers, sweep and polish digitally mapped terminal floors at a rate of more than 5,000 square feet per hour. They pause only when they hit a corner—human cleaners tackle those—or when excited onlookers jump in front of them to take a photo.

All of these are ancillary to the airport’s pie crown jewel. In June, Changi officially opened Jewel, the world’s largest indoor rainforest, which includes a five-story waterfall, 2,000 trees, and 100,000 shrubs.

It took nine years to plan and five years to construct, at a cost of $1.3 billion. Jewel started as a way for the airport to generate money to build an underground parking garage. Touring the ground floor of Jewel is free, but entering the upper level Canopy Park costs $3.30 per person, while activites cost more. The underground parking garage got built—it features live video monitoring to help befuddled commuters remember where they parked—and in the process, Jewel grew from a simple money-making proposition to a catalyst for upgrading Changi’s operations and infrastructure to make it one of the most efficient, pleasant, and technologically advanced airports in the world.

It all begs the question: What if killing time in transit didn’t have to be a drag?

“Some airports see themselves as a logistics company—‘Our job is to make sure you land and get off the aircraft,’” says Jayson Goh, Changi’s managing director of airport operations. “They’re still playing the efficiency game. They haven’t moved on to the experience game.”

Sixty-five million people transited through Changi in 2018, or approximately 13 times more than the population of Singapore. According to the Airports Council International, it’s the world’s 19th busiest airport.

Goh thinks it could do better. More passengers mean more crowds, but also more money spent at airport shops, restaurants, and attractions. Changi had sales of approximately $1.8 billion last year. “The repeat customer is highly critical to my business,” Goh says. “I have two options: do nothing and make you say, ‘Oh, this airport is boring.’ Or, I can create the best attraction to occupy you and make you say, ‘That was a great experience,’ and make you want to fly through Changi again.”

Jewel’s waterfall—officially known as the rain vortex—stops travelers in their tracks. On a recent Friday afternoon, hundreds of people surround it, holding up smartphones; even a monk shoots a video and smiles at his screen before moving on. According to Goh, the plants, natural light, and rushing water produce higher than normal concentrations of negative ions, “which is great for general wellbeing. You should feel exactly like how you’d feel walking by a waterfall in a natural forest.”

Well, maybe not exactly—not many forests are flanked by a Shake Shack with a line 20 people deep. But the point is to expose people who’ve been stuck in airplanes to the elements, and to make them want to get closer.

While anyone can see the indoor rainforest and waterfall—it’s in terminal one, before security— certain activities, like the four-story slide, topiary maze, and trampoline walk—cost money. Some of that revenue goes towards maintaining Mozart, a security and crowd management system, launched in June, that involves more than 5,000 sensors, 200 mobile devices, and 700 closed circuit televisions. Some 4,000 employees make sure everything from the slide to pre-boarding security are operating smoothly.

If a parent reports a child as lost, they text a photo to airport staff. Mozart uses facial recognition software, a technology that privacy advocates oppose, to narrow the field and locate where the child was last seen. Mozart also deploys robots to areas of the airport that need cleaning—it avails of sensors scattered all over the airport, even in the toilets—and uses A.I. to spot trends.

Saturday is the busiest day at Changi, largely because half the people who come to Jewel are local Singaporeans, and this necessitates more staff, human and otherwise, like Peter, a robotic traffic cop with ominously blinking lights that look like eyes. Since May, Peter has been patrolling terminal one’s drop off zone. “We can proactively encourage drivers to move away if they’re loitering too long at the curb,” says Benny Lim, a senior vice president at Certis, the security company that built Mozart.

After registering that a car has been parked for more than a few minutes, Peter will approach, flash a countdown clock, and turn its camera on the car, warning that a flesh and blood officer will issue a ticket if the driver doesn’t move. “Peter can go for 45 minutes before he goes back to his charging dock for 15 minutes,” says Lim. “Of course, naughty drivers could take advantage of that break.”

They’re working out the kinks before unleashing more Peters. “When it’s hot, Peter overheats,” Lim says. “He’s become a mini celebrity, people want to take pictures. They love Peter, but Peter is not meant to be loved.”

Cool robots and revelatory rainforest aside, nowhere is the airport of the future more apparent than at Changi’s terminal four. Opened in 2017, absent of dings and announcements, it is filled with touch screens that guide travelers through check in, baggage drop off, and immigration.

Above the security checkpoint, a digital billboard plays an animated video of luggage that is meant to entertain rambunctious children. “Because it’s self service, you can design your entire journey as you wish, from when you check in to when you want to board—hopefully before the aircraft leaves,” says Goh. “Minus the security screening that has human intervention, I could do a no man terminal. What other airport in the world can do that?”

—The wireless industry needs more airwaves, but it’s going to be costly
—3 critical takeaways from Microsoft’s latest earnings
—What’s next for Google after claiming ‘quantum supremacy’?
—Now hiring: people who can translate data into stories and actions
—3 things Disney CEO Robert Iger says people can expect from Disney+
Catch up with Data Sheet, Fortune’s daily digest on the business of tech.