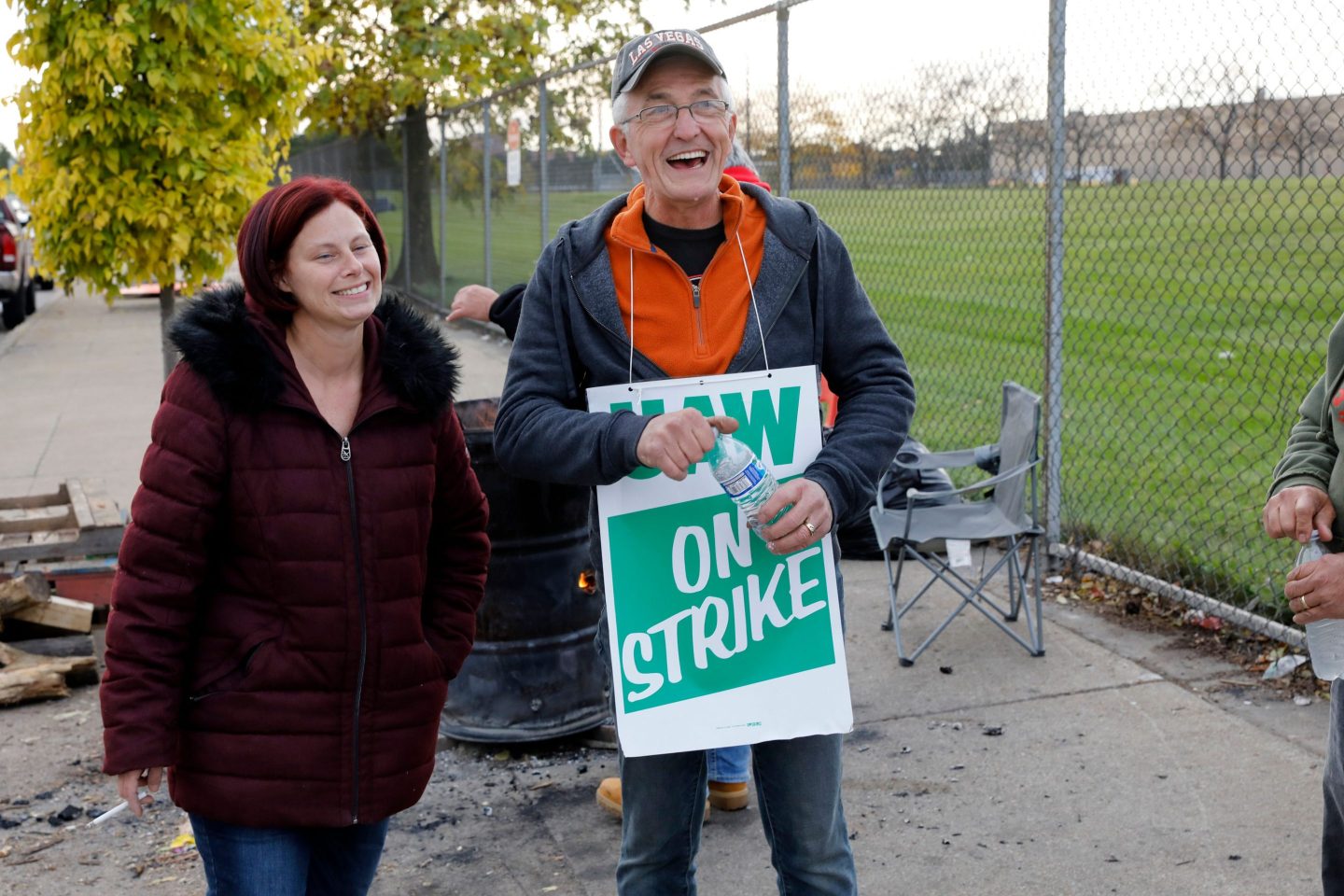 UAW members Melissa Rose-Gorney and Nelson Worley react after reading the news that the contact was ratified, outside of the General Motors Detroit-Hamtramck Assembly plant in Detroit, Michigan on October 25, 2019. - General Motors hourly workers ratified a new contract with the auto giant, ending the longest automotive strike in nearly 50 years. The package includes an $11,000 ratification bonus, wage increases and no increases in health care costs, said statements from GM and the United Auto Workers, touting the agreement as a compromise that worked for both sides after difficult negotiations. (Photo by JEFF KOWALSKY / AFP) (Photo by JEFF KOWALSKY/AFP via Getty Images)

General Motors employees voted in favor of a new four-year labor agreement reached with the United Auto Workers, ending a nearly six week-long strike that has cost the company about $2 billion and rippled through the U.S. economy.

The union said the deal was approved by 57.1% of its members, enough to ratify the contract and stop the longest automotive walkout in 50 years. “General Motors members have spoken,” Terry Dittes, a UAW vice president and head of its GM department, said in a statement.

The union will next target Ford Motor Co. in its contract negotiations. The Dearborn, Mich.-based company will be under pressure to avoid a work stoppage while it’s going through a high-stakes strategic revamp of its operations. S&P Global Ratings downgraded Ford’s debt to one level above junk on Friday, saying the overhaul will be difficult to pull off.

“GM is proud to provide good-paying jobs to tens of thousands of employees in America and to grow our substantial investment in the U.S.,” Mary Barra, GM’s chief executive officer, said in a statement. “As one team, we can move forward and stay focused on our priorities of safety and building high-quality cars, trucks, and crossovers for our customers.”

The prolonged strike at GM potentially shaved tens of thousands of workers from an October jobs report due out next week from the Labor Department. The company reports earnings on Oct. 29 and is likely to detail the impact of the strike and address how much can be recouped. GM shares rose 2.6% to $36.74 on Friday, the highest close in almost a month.

The new contract is expected to raise the automaker’s labor costs by at least $100 million a year, though it allows the company to follow through with closing all but one of the four U.S. plants it announced plans to shutter almost a year ago.

While the deal likely won’t help reduce the $13-an-hour premium that the Center for Automotive Research estimates GM pays workers over foreign automakers’ wage rates, it’s unlikely to lead to an increase in vehicle prices. Labor expenses only account for about 5% of the cost of a car.

GM committed to investing $7.7 billion in U.S. plants and create or retain 9,000 jobs as part of the deal. The automaker will save a factory that sits on the border between Detroit and the town of Hamtramck, where it will build a new line of electric trucks and sport utility vehicles. Among the models under consideration are SUVs that would revive the Hummer brand.

The automaker also plans to build a new joint-venture facility in Lordstown, Ohio, that will make battery packs for electric vehicles. That’s still a setback for workers at a now-idled assembly plant in Lordstown that once made Chevrolet Cruze compact cars. GM has no new work for that facility or two former transmission plants in Baltimore and Warren, Mich.

The contract—which the UAW will use as a benchmark for its negotiations with Ford and Fiat Chrysler Automobiles—included the following concessions to workers:

—How Tesla made more profit from less revenue
—GM reached a deal with its auto workers union, but ending the strike could still take weeks
—Tesla has a luxury car problem. Here’s why investors should be worried
—Where are the boring electric vehicles?
—Inside James Dyson’s costly decision to kill his electric car
Follow Fortune on Flipboard to stay up-to-date on the latest news and analysis.