How a WhatsApp Tax Launched Massive Anti-Government Protests in Lebanon 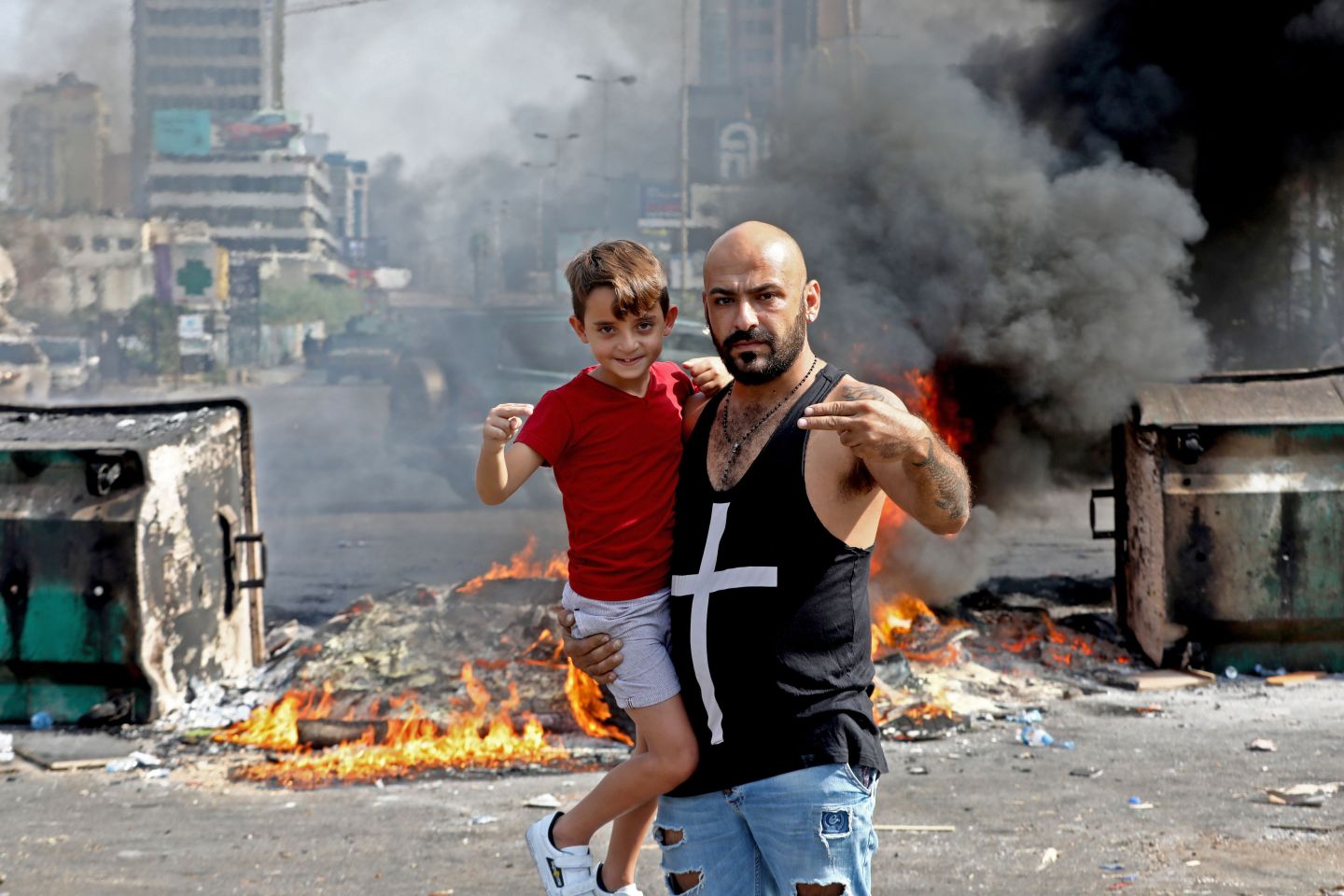 A Lebanese demonstrator poses for an picture during a protest against dire economic conditions in Baouchriyeh on the northern outskirts of Beirut, on October 18, 2019. Public anger has simmered since parliament passed an austerity budget in July to help trim a ballooning deficit and flared on Thursday over new plans to tax calls on messaging applications such as Whatsapp, forcing the government to axe the unpopular proposal.
ANWAR AMRO—AFP via Getty Images

Thousands of protesters cut off roads and started fires around Lebanon as anger over plans to impose a levy on WhatsApp calls escalated into demands for the government to resign.

Demonstrators carrying Lebanese flags thronged outside government headquarters in downtown Beirut again on Friday, as some of the country’s largest protests in years entered a second day. Those taking part are calling on politicians currently debating a proposed austerity budget to step down and hold early elections.

After a night of fury, fires were still burning in some streets strewn with rocks, while new protests broke out in the north and the south, paralyzing most of the country. Security forces deployed reinforcements.

Samir Geagea, leader of the Lebanese Forces Party which has four ministers in the cabinet, added his voice to those calling on Prime Minister Saad al-Hariri’s government to quit over “its utter failure to stop the deterioration of the economic and living conditions in the country.”

Hariri, who canceled a cabinet session planned for Friday, is expected to deliver an address to the nation, according to his party’s website.

As protesters took to the streets of Beirut on Thursday, chants of “the people want the fall of the regime” could be heard, while others shouted “thieves” and “revolution.”

Deputy Prime Minister Ghassan Hasbani, one of the Lebanese Forces members in Hariri’s cabinet, called for “wise thinking.” Lebanon needs “a clear step-by-step road plan and vision, we can no longer use the same-old remedies for new challenges,” he said in an interview.

The economic stakes have rarely been higher for Lebanon, a tiny country that straddles the geopolitical fault-lines of the Middle East, since the end of the 15-year civil war in 1990. One of the most indebted countries in the world, it is struggling to find fresh sources of funding as the foreign inflows on which it has traditionally relied have dried up.

Plans to impose a fee of 20 U.S. cents on the first WhatsApp call that users make every day dominated the airwaves throughout Thursday, causing outrage in a country where communications costs are among the least competitive in the region and people widely use internet voice applications to save money. WhatsApp, a free messaging and voice platform owned by Facebook Inc., has some 1.5 billion users worldwide.

On Thursday, the government also discussed a proposal for a gradual increase to the value-added tax, currently at 11%, and fees on gasoline. Finance Minister Ali Hasan Khalil insisted there were no additional taxes in next year’s budget.

As protests spread to the suburbs and provinces, Telecom Minister Mohamed Choucair called LBCI television to say Hariri had ordered him to cancel the levy. But the reversal came too late to appease public opinion.

Walls of burning tires and debris effectively severed the main thoroughfares at the northern and southern entrances of Beirut and near the city of Byblos overnight, footage aired on Lebanese television stations showed. In downtown Beirut, protesters threw bottles, metal barriers and other projectiles at riot police and occasional scuffles broke out as they tried to break through the security cordon around the government headquarters.

Sporadic demonstrations have erupted for months as the economic crisis has led to shortages of dollars and threatened the pensions of retired soldiers.

The government is under pressure to cut spending, raise taxes and fight corruption — conditions required by international donors to unlock some $11 billion in pledges. But the measures are proving deeply unpopular with the public. Critics say that institutional corruption, nepotism and profiteering by politicians are bankrupting the government.

Promises of assistance from Saudi Arabia and Qatar, which has pulled Lebanon back from the brink in previous crises, has failed to materialize. Expatriate Lebanese, long a backbone of the economy, are remitting less money as confidence in the government’s financial management plummets.

The protests have increased pressure on Hariri, who heads a national unity government that has struggled to overcome sectarian and political differences to push through a reform agenda. Hariri, a Sunni Muslim, has been traditionally backed by Saudi Arabia, but the kingdom has withheld support in recent years as the Iranian-backed Hezbollah militia’s political influence over the government has grown.