Green, Nuclear, and Crowdfunded: One Startup’s Unconventional Route to Building a Novel Reactor 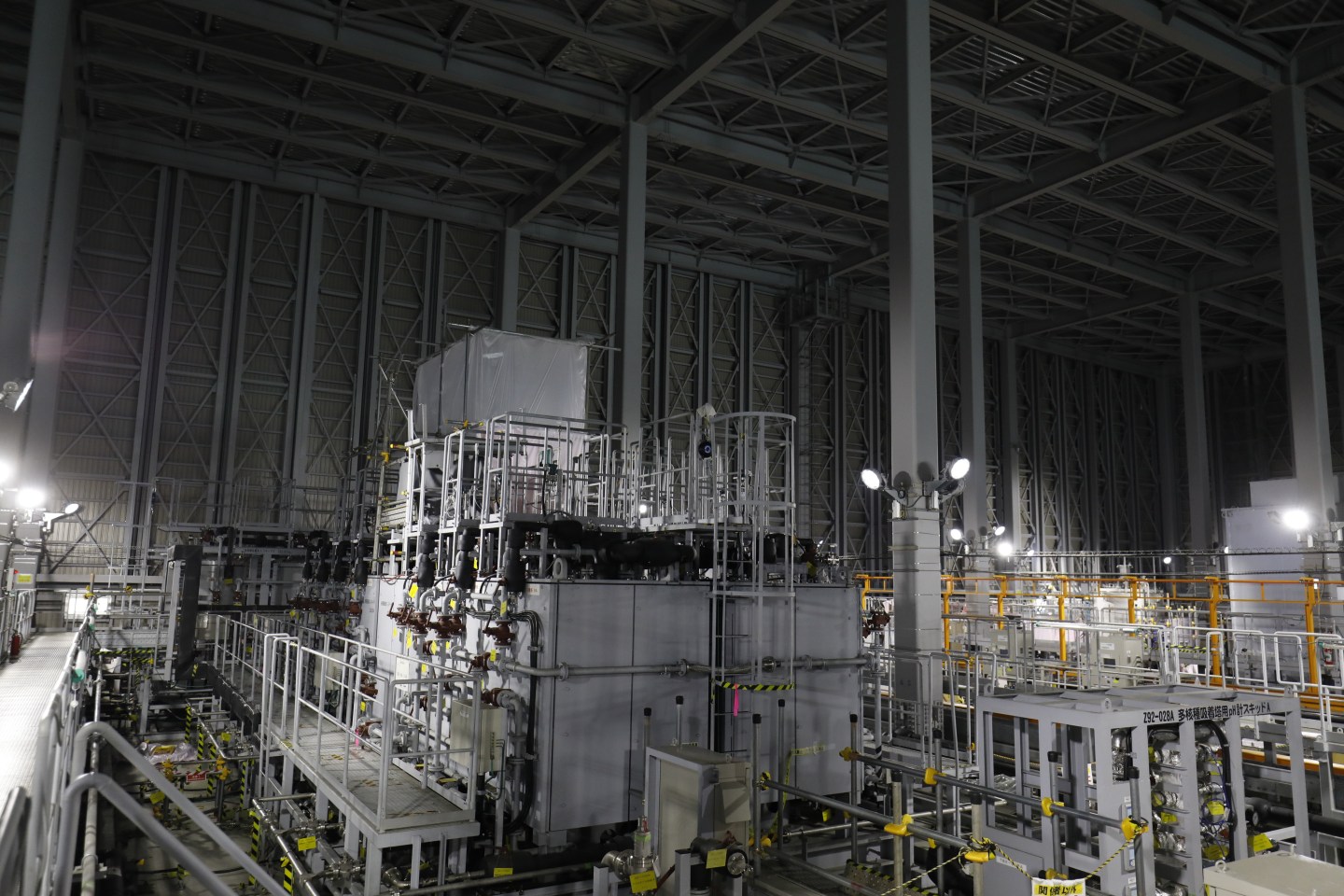 By now, most people are accustomed to crowdfunding as a means to finance everything from smart light bulbs to inventive bug zappers.

But would they fund a next-generation nuclear reactor?

That’s exactly what happened in the U.K., where 156 funders committed at least 2.7 million pounds ($3.5 million) to a British startup that wants to split atoms using an innovative technology generically known as a molten salt reactor (MSR).

The nuclear company, Moltex Energy, claims that its version of an MSR, which it calls the stable salt reactor (SSR), will make nuclear power safer and cheaper than the costly behemoths that have ruled the industry for some 60 years. It’s a claim commonly made not just by Moltex, but by scores of other companies and research groups around the world working on so-called “GenerationIV” (Gen IV) alternative nuclear reactors; they also emphasize that nuclear generation is “green” because it emits no carbon.

“Our success in crowdfunding, which surprised us, may tell us something about public attitudes to new forms of nuclear power,” said Moltex business development director Simon Newton. “Climate change is upon us and there are many individuals who may be frustrated by the slow pace of government action.”

Moltex is certainly not alone in betting on a growing appetite for nuclear, however, and it will have to keep pace with Gen IV rivals across the globe. Companies from the U.S. to Canada and China are pushing into next-generation nuclear, although many have chosen deep-pocketed financiers over funding from the crowd: GE-Hitachi is backing ARC Nuclear Canada; Bill Gates is a major investor in TerraPower; and Canada’s General Fusion has backing from Jeff Bezos.

What is an SSR?

Moltex’s SSR comprises a box-like structure that houses fuel rods containing salt mixed with either uranium or thorium, or with plutonium collected from other reactors where it is otherwise regarded as waste. The heat-emitting rods dangle in a vast bath of additional molten salt that absorbs the heat emitted by the rod’s fission reactions and ultimately drives a steam turbine.

The heat exchange, coolant and turbine principles are similar to how conventional nuclear works.  But molten salt reactors operate at atmospheric pressure rather than the potentially dangerous high pressure levels common in the traditional water-cooled reactors that emerged some 60 years ago.

According to Moltex, physics prevents its reactor from overheating, because fission in its reactor slows down as the temperature rises, and would stop if things got too hot. While Moltex regards conventional reactors as safe, it points out that the safety comes at a huge financial cost, whereas SSR safety comes from the natural shutdown.

On the whole, compared to today’s water-cooled reactors, Gen IV reactors produce less waste, can burn nuclear “waste” as a fuel more easily, and are less prone to meltdowns and explosions.

In the MSR field, Moltex’s rivals include Florida’s ThorCon, Alabama’s Flibe Energy, Gates’ TerraPower in Washington State, and Canada’s Terrestrial Energy to name just a few in the Americas. Then there’s China, which likely has more Gen IV projects underway than any other country.

With nuclear popularity waning in Western countries such as the U.S., U.K., Germany and elsewhere, some see Gen IV as the way to go to assure nuclear has a place in the green power mix.

Moltex has already lined up a customer. Canadian electric utility NB Power in New Brunswick wants to deploy a Moltex reactor by 2030 as part of its push for green power.

Nuclear, whether conventional or alternative, is a carbon-free generating technology. And in NB’s view, the Gen IV reactors are best suited to the job. NB has committed to two different Gen IVs—Moltex’s SSR, as well as a liquid sodium reactor from ARC Nuclear Canada.

“I believe that we need nuclear energy with renewables to decarbonize the earth,” said Brett Plummer, chief nuclear officer for NB Power.

Plummer praises the “inherent safety features” of Gen IV reactors, as well as their ability to help “close the fuel cycle” by burning nuclear “waste” as fuel.

“The more we discuss the advantages of these reactors, the more acceptance we get,” Plummer says.

The green message could be helping to win that backing.

“We’re about 75% non-emitting right now in the province of New Brunswick, and we would like to meet our goal to be completely non-emitting by 2030/2040,” says Plummer. “We’re looking at nuclear technology to fill that gap from a safe, reliable, cost-effective, clean energy source that can integrate with renewables.”

This large CANDU reactor at NB Power’s Point Lepreau site in New Brunswick is likely the future of nuclear’s past, as it will eventually give way to smaller “Gen IV” reactors that the World Nuclear Association says are safer, more efficient, and less prone to weapons proliferation.
NB Power

NB currently serves about 400,000 customers through conventional Canadian CANDU reactors and from hydroelectric, as well as from the fossil fuels that comprise the 25% “emitting” portion of its portfolio.

Many staunch anti-nuclear believers oppose them because they are, well, nuclear. And then there’s the significant challenge that faces almost all of the Gen IV reactors: they are, generally speaking, unproven, at least relative to conventional reactor designs that have been operating commercially for decades. It’s a fact that drove Moltex to crowdfund its current attempt to win an early design stage approval from the Canadian Nuclear Safety Commission (CNSC)—an approval that Moltex still awaits.

Many of the Gen IV  designs have been around for 60 years but have suffered for lack of funding and political will as the water-cooled reactors took hold commercially. The MSR, which Moltex has modified into its SSR, was designed and built at the Oak Ridge National Laboratory in Tennessee (now part of the U.S. Department of Energy) in the 1950s and 60s.

Many Gen IV designs have been around for decades. Here Alvin Weinberg, who developed an experimental molten salt reactor at the U.S’.s Oak Ridge National Laboratory (ORNL) in the 1960s, marks 6,000 hours of its operation in 1967. ORNL is now part of the Department of Energy.
ORNL

In fact, developers were working on it in lock step with the water-cooled reactors which would eventually prevail under President Richard Nixon. Water-cooled won in part because they yield readily-accessed plutonium—a byproduct that was desirable in the height of the Cold War for its bomb-making properties.

Building the Moltex reactor will ultimately require 1 billion pounds (about $1.28 billion) and possibly a lot more, so Moltex, based in Stratford-upon-Avon, about 100 miles northwest of London, will seek more conventional equity funding in the future. But it needs money in stages. At the moment, it has an ongoing requirement to fund the rigorous process of gaining regulatory approval from the Canadian Nuclear Safety Commission for the reactor’s design.

As a result, it set out last May to raise 700,000 pounds via U.K. crowdfunding site Shadow Foundr. Pitching itself as “a disruptive outsider to the slow-moving nuclear industry,” it promoted its technology for “allowing nuclear energy plants to be built for half the cost of a coal-fired equivalent; preventing potential meltdowns; and converting existing nuclear waste into fuel for future nuclear energy.”

Six weeks after the campaign’s launch, 156 funders had committed 2.7 million pounds to Moltex, nearly four times the 700,000 pounds it sought. While a “Theo” listed on the Shadow Foundr site came in at 1 million pounds, and a “James” at 200,000 pounds, other individuals are believed to have kicked in a more earthbound 500 pounds, the minimum set by Moltex.

Combined with another 3.3 million pounds it raised from existing private investors starting in 2018—including 2.5 million pounds from Spanish energy consulting and engineering firm Idom—Moltex said it netted a total of 6 million pounds in what the company considers its Series C round of financing.

So in a nuclear world that is typically big money and conventionally financed, why did Moltex go the crowdfunding route?

“Up to this point we had always had a 50,000 pounds minimum investment, partly because of the overheads of managing large numbers of shareholders,” Newton said. “[But] we had a suspicion that there would be some demand for shares at lower levels of investment, which turned out to be true.”

The successful crowdfunding campaign also ended up sending a broader message; that there’s public appetite for nuclear—especially molten salt and other Gen IV reactors—to play a big role in providing CO2-free energy to a climate-challenged world.

Advocates point out that nuclear, unlike wind and solar, can provide a constant, 24-hour source of reliable energy, and thus should be part of the conversation along with other green sources. The case is all the more compelling following the European Union’s decision in late September to include nuclear in a sustainable energy finance scheme.

Still, nuclear has long had to combat a reputation as dangerous. Even though the industry has a strong safety record and has over the decades caused incomparably fewer deaths and illnesses than fossil fuel plants that pollute, public opinion has gravitated against nuclear.  Three well known accidents over the last four decades—Three Mile Island, Chernobyl and Fukushima—have reinforced the negative views. While direct deaths were minimal, the fatal consequences could have been much worse had the accidents not been halted in time. And it is the potential for a catastrophic accident that keeps many people steadfastly opposed to nuclear.

For that reason, many advocates of green power such as wind and solar have avoided nuclear. But others are coming around to it as part of a combined renewables/nuclear approach. Late last year, for instance, the Union of Concerned Scientists in the U.S. recommended predicating financial support for nuclear on “consumer protection, safety requirements, and investments in renewables and energy efficiency.”

In this environment, with the world increasingly subscribing to a carbon-free, green imperative, the time for Gen IV could now be coming.

—Offshore wind enters new era with world’s biggest turbines—and no subsidies
—Saudi Aramco says damage that plunged world oil market into chaos is already fixed
—Allbirds founders on why we need to eliminate plastics for good
—Nigerian suit against JPMorgan opens a window onto how oil field contracts are won
—Listen to our audio briefing, Fortune 500 Daily
Subscribe to The Loop, a weekly look at the revolutions in energy, tech, and sustainability.