What to Watch This Weekend In Theaters and On Demand, From ‘Joker’ to ‘Low Tide’ 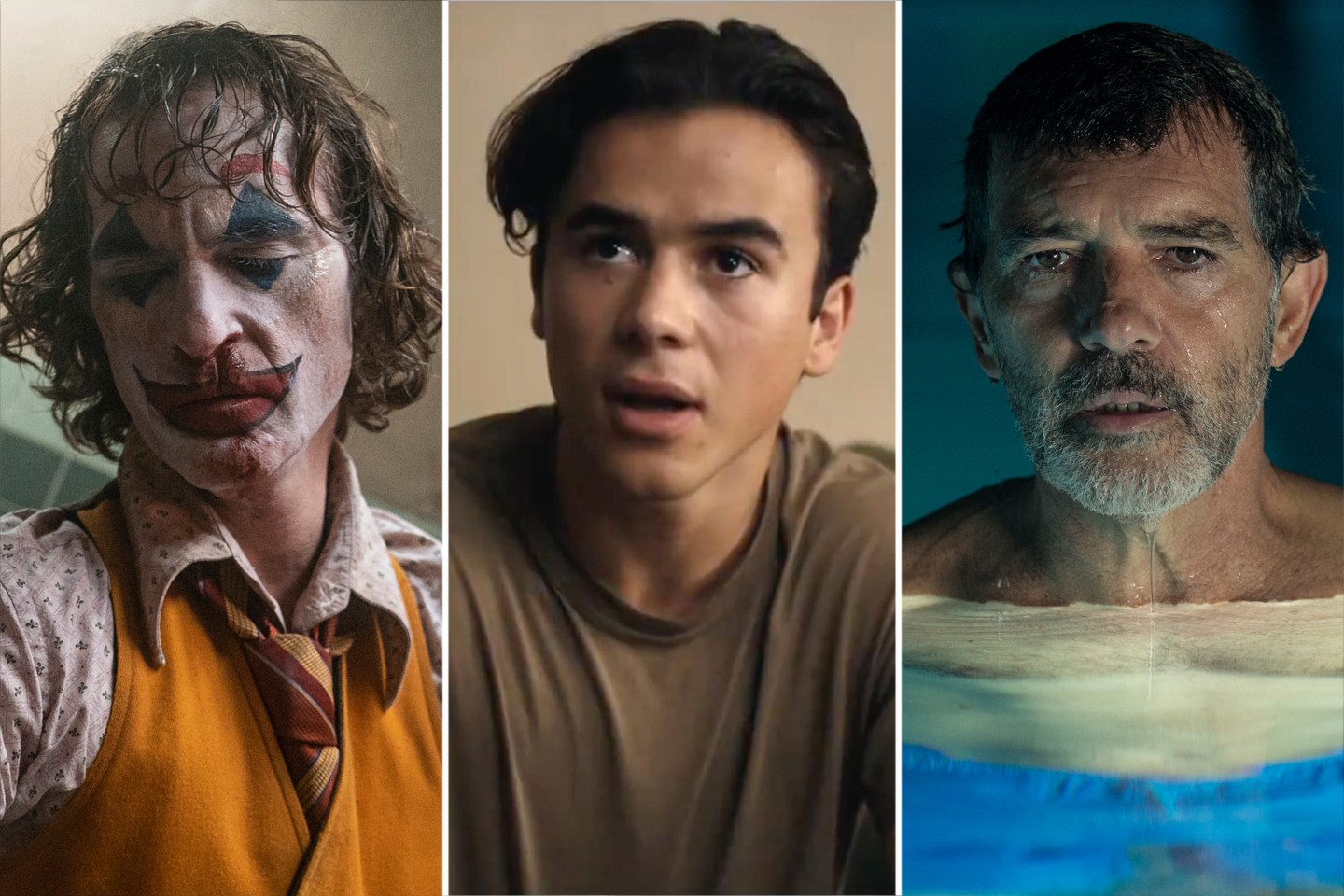 SEE IT: ‘Pain and Glory’ (In Select Theaters)

The great director Pedro Almodóvar is perhaps best known for his use of colors. The worlds of his films—often exuberantly triumphant works of sexual and political liberation—are painted like canvases, their cities awash in apricot and indigo, their homes so overflowing with vibrant, immoderate decor that they feel slightly unreal.

Pain and Glory —which refracts Almodóvar’s childhood memories back across his illustrious career—is one of the director’s most personal ventures, a sort of “autofiction” that places Antonio Banderas in the role of an aging, ailing Spanish director. But it’s surprisingly one of his more accessible films, too, and a generous one in its articulation of living, dying, and the creative process that subsumes all in between.

The character, named Salvador Mallo, has more in common with Almodóvar than spiky hair and the earned solemnity of a reformed enfant terrible. Coming of age in a Catholic household, raised by a single mother (the elegant Penelope Cruz in flashbacks, and Julieta Serrano, wonderful in a lower-key way that’s just as captivating, in the present) and flushed with the nascent tingling of first desire, Mallo’s a thinly veiled stand-in, and the director finds ways to speak powerfully through him, even in scenes where Pain and Glory diverts from being a straightforward autobiography.

Occasionally, unfamiliar threads are introduced that invigorate its interweaving of past and present. The film gradually reveals itself to be a sensitive paean to a life lived, if not always wisely, at least authentically. Banderas’s performance is so towering, so finely shaded yet thrillingly unvarnished, that the film feels at many a moment ready to burst with all the raw feeling bottled up inside it. In the finale, it finally does, fireworks rippling against the night sky, bright and beautiful for as long as they may last, their light illuminating the dream of a child, eyes wide and mind newly ablaze, far below.

An Amblin haze backlights this wistful, melancholic little tale about kids growing up all in a hurry once uncovered treasure puts them, dangerously, at odds. Set along the Jersey Shore, it’s largely framed as the story of Peter (Jaeden Martell), a soft-spoken teen who tags along as his older brother’s friend group breaks into vacation houses, plundering valuables to bankroll long, lazy days along the boardwalk.

When Peter and his brother Alan (Keean Johnson) uncover what would seem to be the perfect score—gold coins forgotten beneath floorboards in a dead man’s home—they’re at first euphoric, in that headlong, innocent way that sees only the wealth and none of the potential consequence. But there’s Red (Alex Neustaedter), their mercurial and unpredictably violent best friend, who’d have fit in well alongside the gang in The Outsiders you weren’t supposed to root for, out to get his share of the gold.

Writer-director Kevin McMullin, with a script strongly reminiscent of Stand By Me and designs on replicating its warm ’80s cinematography, keeps things small-scale, allowing the performances of his young leads to stand out. Martell, in particular, summons an emotional depth and earnest charisma that works well for the kind of wise-beyond-his-years leader he’s playing here, a slight variation on the typically meeker heroes he’s played in It and Midnight Special. But McMullin loses the thread as Low Tide flows gently into what should be its pulse-pounding, climactic moments, summoning none of the urgency and tension that a great coming-of-age story needs to stand out. At just 86 minutes, it’s a film that doesn’t overstay its welcome but never really announces itself either.

SKIP IT: ‘Joker’ (In Theaters)

How do you solve a problem like Joker? It’s become difficult to consider Todd Phillips’s self-serious supervillain origin story apart from the punishing discourse surrounding it, at the heart of which lies a disagreement about what our popular entertainment owes us, if anything.

Should movies take a moral stance on the political landscape into which they’re being released—more specifically, must they take a specific stance, lest their provocations be seen as aspirational, rather than merely artistic, and galvanize the wrong kind of people to violent action?

These are tricky, queasy questions to ask (though any answer should make clear that art doesn’t cause violence and never has). Joker, as it would happen, isn’t smart enough entertainment to even effectively pose its questions, much less answer them; what’s most remarkable about the film may just be that the conversation surrounding something so calculated and (despite appearances) commercial has grown so heated.

After all, Joker isn’t really out to watch the world burn; it’ll settle for igniting the box office a few weekends over. A chaotic work that openly glorifies its nihilism without care for how doing so undercuts it thematically, Joker is more concerned with rising above its comic-book brethren, preaching the gospel of itself, than making any profound statement about class, mental health, inequality, and mob justice (all issues stuck in its crooked set of teeth). That wouldn’t be a problem, apart from that the film is itself as deluded as the clown at its center. Joker postures like a work of art, a high-minded drama with something to say, yet more often acts like a stupid popcorn pic that can’t keep its story straight (let alone its self-contradictory politics). Even worse, the film never once seems to think we can see through its artifice. Any incendiary tilt to its narrative is offset by a self-imposed and half-baked sense of weight.

The fault would seem to lie with Phillips and co-scribe Scott Silver, both of whom seem far too enamored of their combustible, of-the-moment conceit, and perhaps scared stiff by it, to responsibly handle the material. Visceral though the film is its aesthetic resurrection of the pulpy ’70s and ’80s New York playground where Martin Scorsese staged Taxi Driver and The King of Comedy (two films Joker cribs from liberally despite seemingly failing to sense the acerbic wit veined in both), Joker operates almost entirely at the surface level.

Joaquin Phoenix, at the eye of this storm, is the real reason to watch; his bravura performance is a feat of acting more forceful and frightening than any I’ve seen this year. All hunched shoulders and sunken-in chest, skin pale and seemingly stretched so thin across his face it resembles a Halloween mask, Phoenix doesn’t play the man who would be Joker so much as lock himself within the character’s emaciated frame and throw away the key.

What a shame, though, that his carnival tent-top of psychic pain is pitched upon such poisoned ground. There’s real ambition to Joker, but its vision isn’t just ugly (and if it was only that, it might be a better, or at least more interesting film). It’s also near fatally obtuse, so intent on being gritty, dark, provocative, and profound that it settles for the shallowest, least interesting version of all four. In this, it is exactly the equal of Phoenix’s villain: a nasty, masochistic piece of work possessed by the notion the world must heed its lone-wolf howl, even though it has nothing to say once given the platform.

—Will Adam Sandler finally get an Oscar nomination?
—How Comedy Central grew up to hold its own against Netflix
—Netflix bets its future on Stranger Things creators with new deal
—Musicians and fans unite to keep facial recognition tech out of concerts
—Building Judy Garland: How Renée Zellweger was transformed into the legend
Follow Fortune on Flipboard to stay up-to-date on the latest news and analysis.