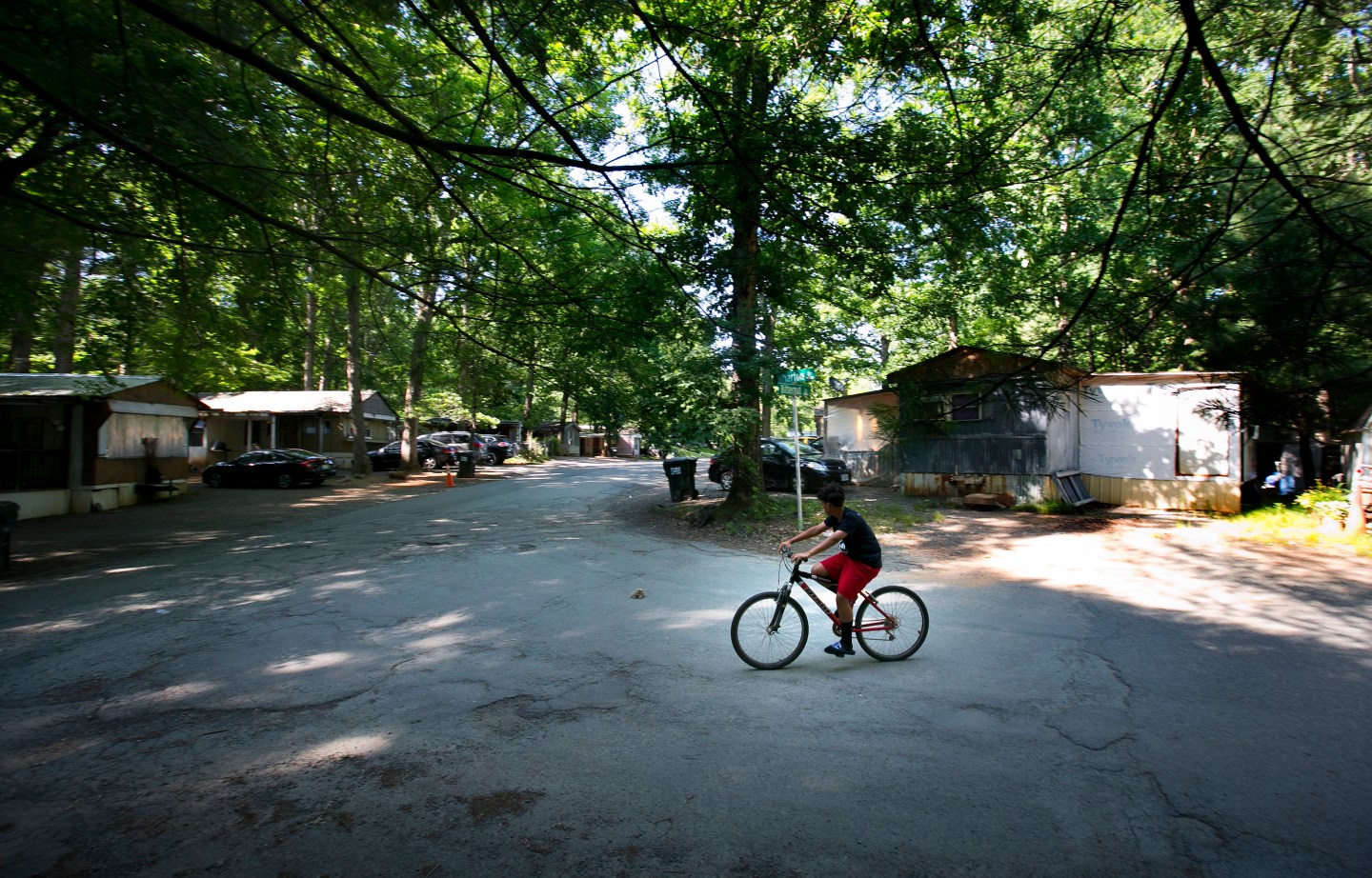 CHARLOTTESVILLE, VA - JUNE 3: A boy rides his bike Monday, June 3, 2019 in the Southwood Mobile Home Park in Charlottesville, Virginia. Southwood is in one of the 8,700 opportunity zones designated as part of the Tax Cuts and Job Act of 2017. (Photo by Julia Rendleman for The Washington Post via Getty Images)
Julia Rendleman—The Washington Post via Getty Images

Opportunity Zones (OZ) were created to spur tax-incentivized investments that benefit underserved communities across the country. But there is a crucial distinction being lost in the current conversation.

Opportunity Zones are a market, not a program.

This is a distinction with a serious difference. It has significant bearing on how, why, and where OZ investment will flow next—as well as who is best positioned to influence the results—in order to deliver positive long-term community impact.

We hope to sharpen this distinction because, while federal programs and nationwide markets can (and should) complement each other, they should not be confused with each other.

If Opportunity Zones were structured as a program, we would expect to see two key components. First, a finite appropriation of funds on an annual basis. Second, a competitive application and allocation process. This type of structuring enables more control over the activities and outcomes funded by the program, but it presents significant risk of annual disruption (Congress could fail to adopt a budget).

Instead, OZs are a market-based incentive designed to catalyze private sector investments in specified census tracts. Anyone meeting the qualifications for market entry can participate.

That is exactly what is happening. Once the 8,764 Opportunity Zones were designated and the Treasury Department began issuing regulatory guidance, the market sprang to life. There has been a race to stake a claim in this new market, with the launch of at least 264 funds, targeting more than $63 billion dollars, in less than two years.

The earliest OZ investments have been a land rush, mainly aimed at low-risk, shovel-ready real estate. And that should have been expected. Capital, like water, flows down the path of least resistance. The key will be ensuring it keeps flowing into communities and creates the outcomes that justified this tax incentive in the first place.

The press has pointed out some of the flaws in the nascent OZ market, focusing on how it can be manipulated by the wealthy for their own gain.

Paul Krugman, writing in the New York Times, called OZs “The Great Tax Break Heist,” pointing out that the OZ tax incentives helped spur the construction of luxury condominiums and hotels that could have been financed without the help. Tony Mecia was similarly critical in a Wall Street Journal editorial titled, “Opportunity Zones Knock Where They’re Needed Least.” “Because of the way the federal government wrote the rules, some census tracts … appear on paper to be high-poverty areas but are actually populated by college students with no income,” Mecia wrote. “As a result, a tax benefit intended to help poor areas is channeling money to places that are already relatively well-off.”

But other outlets, such as sustainability-focused Impact Alpha and real estate-focused Bisnow, have highlighted reasons for OZ optimism. Among the positive examples are plans to turn a vacant 100,000 square-foot property in downtown Erie, Pa., into a fresh food and restaurant market; the revitalization of a near-abandoned 26-acre mall in Collin County, Texas; and the new Washington, D.C.-based Opportunity Zone Justice Accelerator helping the previously incarcerated start new businesses.

Despite the actions of a few first movers, the core purpose for which Opportunity Zones were created—delivering impact in underinvested communities—remains unchanged. And since OZs are a market rather than a program, the private sector, not the government, is best positioned to influence such outcomes. We have three key suggestions on how to do just that.

The $200 million KNGDM Impact Fund plans to “invest with the community outcomes in mind first, giving power to the resident.” Other investors are looking beyond city limits, pursuing strategies to invest in rural OZ communities (a central topic at a recent summit hosted by Opportunity Alabama). Philanthropic organizations are also getting involved, with the Kresge Foundation announcing earlier this year an investment of $22 million in OZ funds run by Arctaris Impact and Community Capital Management.

Greater community engagement and additional collaborations like these will yield the long-term benefits the OZ market was made for.

Every fund manager who sees OZs as more than just a tax break should adopt the Opportunity Zones Reporting Framework developed by the U.S. Impact Investing Alliance, Georgetown University’s Beeck Center for Social Impact + Innovation, and the Federal Reserve Bank of New York. The framework provides a series of impact-focused best practices for fund managers and investors, including a set of core principles to guide both OZ activities and impact measurement. It also features a flexible outline for impact reporting, which can be utilized regardless of sector or geography.

Impact starts with intent. Deciding to adopt the framework sends a strong signal that can positively influence both perception (in the media) and reality (within communities). It also distinguishes those who care about creating opportunities for others through OZ investments from those just in it for themselves.

As we have advocated elsewhere, OZ funds should also integrate impact measurement and reporting into their decision-making processes. Numerous methods of industry-adopted impact measurement already exist, including Impact Rate of Return, IRIS+, and the B Impact Assessment. (Howard co-authored Social Value Investing: A Management Framework for Effective Partnerships, in which Impact Rate of Return was first published; he owns the copyright and trademark. Mark was a volunteer member of the industry-wide review group for IRIS+.)

Impact measurement is now easy enough to implement and rigorous enough to serve as a sound management practice.

Why should OZ fund managers go through this effort? Well, there are at least three good reasons: Building trust with the community up front is much easier than restoring it once it has been lost. Tracking data on impact from day one is much easier than trying to rediscover it retroactively. And it will be much easier to evaluate and justify tax breaks should a future Treasury Department (or even the current Congress) change the rules on impact measurement at any point in the next decade.

Commit to results, and see it through

Improving communities is not a single-season endeavor, and it never will be. Reversing generations of underinvestment and disinvestment cannot be accomplished in the first few innings, and especially not before all the players have joined the game.

More capital will flow into OZs as investors reap capital gains from a decade-long bull market, and as we approach the Dec. 31, 2019 deadline to maximize OZ tax incentives. The private sector should step up to the plate now to fulfill the spirit of the law.

Opportunity Zones exist to deliver lasting impact for communities that have too often been overlooked by traditional investment cycles—and news cycles—and the next few months truly matter. Every city, fund, and investor should have a plan, stick to it, fix it when needed, and work with communities throughout, ensuring that each deal contributes to the greater good.

OZs can, and should, go beyond easy-to-finance luxury condos, but only private sector leadership can make that happen. Therefore, it is time for business leaders to go beyond the simplest deals by engaging with the communities in which they are investing, becoming serious about social impact, and getting down to the hard work of making this new market work for everyone over the long haul.

Howard W. Buffett (@hbuffett) is an associate professor and research scholar at Columbia University’s School of International and Public Affairs and the author of Social Value Investing.

Robert T. Lalka (@RobLalka) is the Albert R. Lepage professor of business at Tulane University’s A.B. Freeman School of Business and executive director of the Albert Lepage Center for Entrepreneurship and Innovation.

Mark M. Newberg (@MarkNewberg) is a fellow at Georgetown University’s Beeck Center for Social Impact + Innovation and the president of Stockbridge Advisors.

The authors have no investments or associations with the organizations mentioned in this article, unless otherwise indicated.

—Transportation safety head says it’s time to lower the legal BAC limit to .05%
—Diversity and inclusion is meaningless if people with intellectual disabilities are left out
—The USMCA could spur medical breakthroughs. Here’s how
—How we can make public housing safe from sexual harassment
—5 ways companies can show their commitment to improving the world
Listen to our audio briefing, Fortune 500 Daily