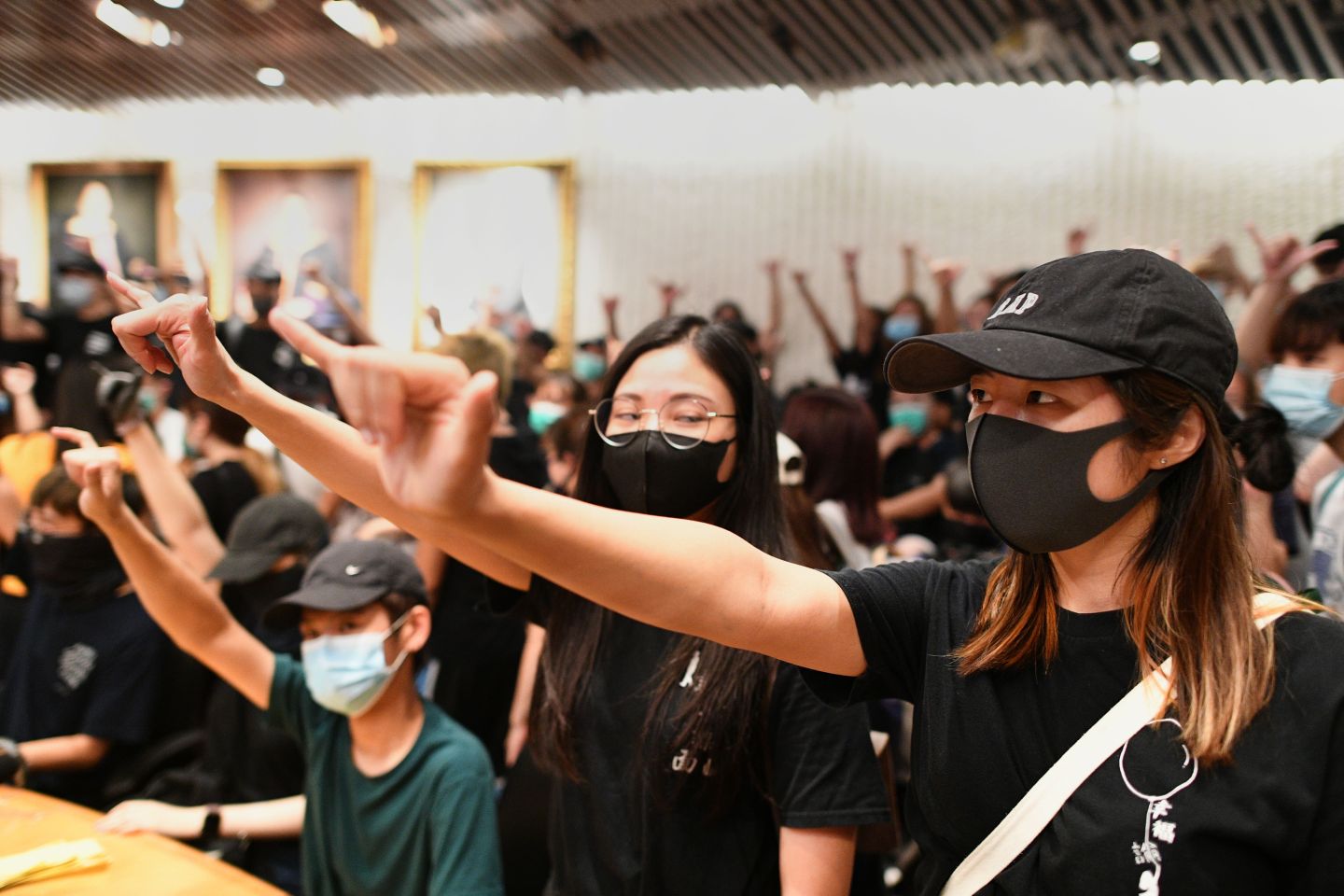 Student protesters gesture in a meeting room after forcing their way into the administrative offices at the Chinese University of Hong Kong (CUHK) to demand to speak to the school chairman in Hong Kong on October 3, 2019. - Anger continued to mount over the police shooting of a teenage protester on October 1 who attacked officers, in a dramatic escalation of the violent unrest that has engulfed the territory for months. (Photo by Mohd RASFAN / AFP) (Photo by MOHD RASFAN/AFP via Getty Images)
MOHD RASFAN—AFP via Getty Images

Hong Kong will use an emergency ordinance for the first time in more than a half a century in order to ban face masks at public gatherings, according to local media outlets including the South China Morning Post and news channel TVB.

The government will enact the Emergency Regulations Ordinance after a special meeting of the city’s Executive Council on Friday, TVB reported, citing people it didn’t identify. First passed by the British government in 1922 to quell a seamen’s strike in Hong Kong’s harbor, the law was last used by the colonial administration to help put down riots that rocked the trading hub in 1967.

A spokesman for Chief Executive Carrie Lam’s office wasn’t immediately able to comment on the reports when reached by phone Thursday afternoon.

The move would come shortly after a protester was shot in violent demonstrations that once again shook the city on Oct. 1, as President Xi Jinping celebrated 70 years of Communist party rule in Beijing. Some pro-China lawmakers in Hong Kong had called on Wednesday for a ban on wearing masks at public gatherings to stop protesters from hiding their identity from police officers.

The government re-evaluated the situation after clashes in multiple districts on National Day, Cable TV reported, citing unidentified sources. Authorities believe the anti-mask law can help restore order, the report said, adding that it would only target occasions like certain rallies and marches. Details were still being studied, it said.

“Now the anti-mask law at least gives investors some hope that it could be a way to cool down the protests,” said Steven Leung, executive director at UOB Kay Hian Hong Kong Ltd. “Some people could be worried about being identified if they can’t wear masks during protests. That’s why we see local shares rallying, such as developers and retailers.”

If emergency powers were invoked, it would herald a dramatic escalation by Lam’s government, which has struggled to control chaotic demonstrations that have raged for four months.

The ordinance — previously denounced by protest leaders as a form of martial law — could give the government greater leeway to arrest citizens, censor publications, shut off communications networks and search premises without warrants, among other measures. It would also permit authorities to implement any new regulation the government believes would help end “an occasion of emergency or public danger.”

“Once the emergency regulations ordinance is invoked that would give a blank check to the chief executive,” said opposition lawmaker Alvin Yeung. “The only logical conclusion is that the situation will escalate. And once the situation escalates, and since the chief executive already enjoys the powers of invoking the emergency regulations, the only logical conclusion is she might further introduce something else. What would that something else be? We don’t know.”

Using the statute to crack down on pro-democracy protests risks bringing a fresh wave of international condemnation. U.S. lawmakers have already warned Lam that declaring emergency powers was “the wrong way to resolve the situation,” while the U.K. and United Nations have criticized aggressive police tactics.

Unrest began in June in opposition to a since-scrapped bill that would have allowed extraditions to mainland China, but has since expanded to include calls for an independent inquiry into police violence and greater democratic accountability in the former British colony.

Rumors of the impending use of the emergency law have persisted after Lam refused to rule out using the ordinance when asked directly about it at a late August press conference.

“All laws in Hong Kong — if they can provide a legal means to stop violence and chaos — the SAR government is responsible for looking into them,” she said, referring to the special administrative region’s formal name.

Some lawmakers and political observers have suggested the emergency measures could also be used to delay the upcoming local district council elections, which are due in November.

“To impose an anti-mask law in the current social condition is to further infuriate the people and will definitely be met with escalating violence,” said opposition lawmaker Fernando Cheung, who has often been at the scene of flashpoints trying to defuse tensions. “This is no different than adding fuel to fire. The result will be riots.”