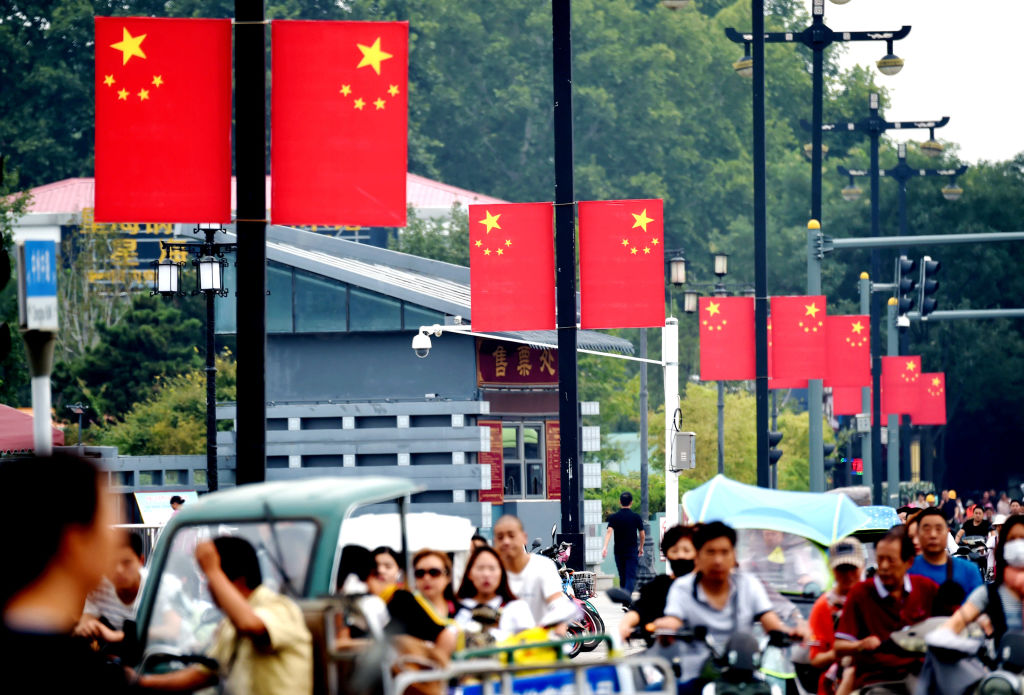 Chinese national flags are seen along a road to celebrate the 70th anniversary of the founding of the People's Republic of China on September 2, 2019 in Luoyang, Henan Province of China. (Photo by Zhang Yixi/VCG via Getty Images)
Zhang Yixi—VCG via Getty Images

The self-governing island of Taiwan is running out of friends.

Last week the Solomon Islands—a Pacific Ocean archipelago and Oceania’s fifth-largest country by population—officially switched diplomatic ties from Taiwan to Beijing, putting an end to 36 years of relations with Taipei.

Days later, the Republic of Kiribati, a Micronesian state, severed ties with Taiwan as well, bringing the Chinese island’s remaining allies down to just 15.

For nations making such decisions, the switch of allegiances reflects the need to tap into mainland China’s deep pockets. (Any country seeking diplomatic ties with mainland China must cut official ties with Taipei.) But amid the ongoing trade war, such moves carry even more weight, with some—especially those in Washington—seeing the choice between mainland China and Taiwan as picking sides in the China-versus-U.S. match. And the U.S. seems to be rallying against those congregating in China’s corner.

The U.S. has long upheld the One China policy that recognizes a single Chinese government based in Beijing; Taiwan is seen as a part of China. (Government officials in Taiwan promote an alternative view that Taipei is the capital of the One China.) At the same time though, the U.S. supports Taiwan militaristically and financially and stands against Taiwan’s diplomatic isolation, especially in this trade-war era, as a means to counter Beijing’s influence.

Interestingly, the Central Bank of the Solomon Islands (CBSI) flagged potential financial retribution from the U.S. in assessing its diplomatic shake-up.

“One should consider the potential freezing of Foreign Reserves, about 64% of Solomon Islands Foreign Reserves are in USD, such an act by USA will cripple our economy,” the report said, according to the Solomon Times. Other risks emerged too, including further indebtedness and loss of Taiwanese financial support.

But what Beijing offered seemingly outweighed those concerns, and the Solomon Islands made the jump, knowing full well it would put itself in the U.S.’s crosshairs.

It’s no secret what ultimately won the Solomon Islands over; it was Beijing’s promise of funds. China, already the Solomon Islands’ largest trading partner, pledged to fully replace the aid packages Taiwan had previously supplied and reportedly offered up to $500 million toward future development projects.

Prime Minister Manassah Sogavare of the Solomon Islands, elected last April, made it a big part of his platform to pursue development through large-scale infrastructure projects, which falls in line China’s trillion-dollar-plus global development policy called the Belt and Road Initiative (BRI).

“Solomon Islands will greatly benefit from the BRI and will pump in a lot of infrastructure development that is directly linked to spur our economic development,” he said recently.

In addition to expected infrastructure projects, Beijing also agreed to maintain the aid Taiwan had supplied to the Solomon Islands via the rural constituency fund, according to a Solomon Islands parliamentarian. Such funds have been given directly to Solomon Islands MPs to use at their discretion, and have long been plagued by allegations of corruption.

“China never hands out those kinds of (rural constituency) funds, so the fact that they agreed to do that for a temporary period shows just how eager they are to get countries to change ranks,” Jon Fraenkel, a comparative politics professor focusing on the Pacific Islands at the Victoria University of Wellington, told Fortune.

Not everyone in the Solomon Islands sees the financial implications of the diplomatic switch as an upside; in fact, the central bank warned that the move may exacerbate the country’s indebtedness.

For the last ten years or so, the Solomon Islands has been building a massive hydroelectric power project to help solve the country’s energy needs. While near completion, the central bank noted that more borrowing for the facility threatens to drive the country to debt levels that are 10% to 30% of GDP, and raised questions as to whether additional projects proposed through BRI would be financially viable.

This debt-dollar consideration was one of Taiwan’s central arguments in trying to persuade the Solomon Islands not to ally with Beijing. Peter Kenilorea Jr., chair of the country’s Foreign Relation Committee in parliament, outlined similar concerns to the Lowy Institute’s Graeme Smith in Smith’s Little Red Podcast.

“Development doesn’t usually come cheap. It comes in the form of loans. We don’t want to be tied into debt, particularly to one country,” Keniloria said.

Such fears, along with Taiwan’s previously long-held ties to the Solomon Islands, may help explain the fraught response in the country.

Citizens from one province went as far as to demand independence from the country in defiance of the diplomatic switch, and the Solomon Islands’ prime minister even decided not to travel to the United Nations general assembly in the wake of the decision.

Pushback with global consequences is brewing in the U.S., where officials, including Sen. Rubio, are indicating they will reassess existing aid to the Solomon Islands and are threatening the country’s reserves following its change in allegiance.

For Fraenkel, the harsh U.S. response is, in part, a product of escalating tensions amidst the U.S.-China trade war. “I think this would have been very different a few years ago,” he told Fortune.

Secretary of State Mike Pompeo’s recent visit to Micronesia suggests how the U.S. view of Beijing’s trade practices may be influencing its efforts to keep Taiwan’s remaining allies in place.

“Our compacts… sustain democracy in the face of Chinese efforts to redraw the Pacific,” Pompeo said. “Let’s make no mistake about it, China’s capacity, the People’s Liberation Army’s capacity to do exactly what they’re doing is a direct result of trade relationships that they built.”

For his part, Prime Minister Sogavare expressed both disappointment and defiance to the U.S. reaction.

“The Solomon Islands will not allow itself to be used as a tool to satisfy the narrow geopolitical interest of foreign political powers,” Sogavare said.

Despite the U.S. appeals, the number of countries recognizing the government of Taiwan over Beijing has dwindled to 15 from 23 since 2016. That remaining group will no doubt mull the same factors as the Solomon Islands—China’s BRI, its growing global clout, possible U.S. retribution—in assessing whether to maintain its existing relationship or switch sides.

Beijing, meanwhile, is continuing its campaign to lure nations away from Taipei. After winning over the Solomon Islands and Kiribati, the latest question is whether Haiti is next.

—The European Central Bank’s “Bazooka” is back. This time, with less of a bang
—Nestlé, world’s largest food supplier, aims to eliminate all greenhouse gas emissions by 2050
—BP’s CEO says he’ll sell oil projects to meet Paris climate accord goals
—The U.S. and China are easing back on trade war tariffs as talks near
—Listen to our audio briefing, Fortune 500 Daily
Catch up with Data Sheet, Fortune’s daily digest on the business of tech.