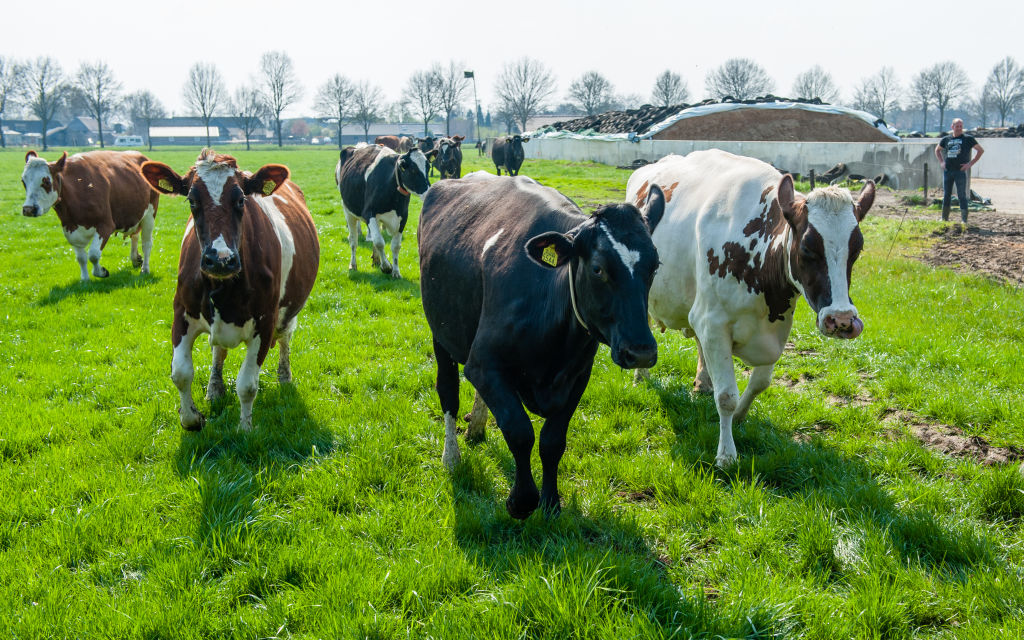 April 7th, The Netherlands. Cows came outside for the first time after the winter. In the spring, when the grass is long enough and the soil is dry, the barn doors are opened and the cows go into the meadow after having spent the whole winter inside. This is a special moment for them that they celebrate jumping, twirling and running across the meadows in an enthusiastic explosion of happiness. So much enthusiasm is contagious, and many Dutch farms open their doors to the public so visitors can participate of this special moment of joy. (Photo by Ricardo Hernández/NurPhoto via Getty Images)
Ricardo Hernández—NurPhoto via Getty Images

Could the secret to cutting emissions lie with healthier, more productive cows?

That’s the idea behind a major part of Nestlé’s plan to cut emissions to “net zero” by 2050, which it announced last week. Though famous for snacks from chocolate bars to noodles to instant coffee, the core of the Swiss conglomerate’s business is still dairy: it was founded in 1866 by two American brothers as the Anglo-Swiss Condensed Milk Company, on the back of the surplus of high-quality Swiss milk, and went on to become the world’s largest dairy company.

Livestock agriculture—and the raising of cows for dairy and meat, in particular—is carbon intensive. According to the Food and Agriculture Organization (FAO), the UN’s food agency, livestock agriculture is responsible for 14.5% of the world’s emissions, and cows alone account for 65% of that.

Meanwhile, it is one of the most difficult sectors to decarbonize, for two major reasons. First, cows are famously gassy and the methane they emit is a particularly potent greenhouse gas. Second, raising cows is by its very nature land-, food-, and water-intensive, because of what the cows themselves consume, and because it uses land that could otherwise grow plants or be reforested, creating the “carbon sink” necessary to offset emissions.

As a result, many climate experts—including the U.K.’s commission on how to reach “net zero” as a nation by 2050—recommend dramatically reducing the amount of animal products in our diets, particularly beef and dairy. (What is “net zero”? Read our explainer here.)

But few experts say that a totally vegan diet is feasible for most people, and while Nestlé says it will make more “plant based” foods, dairy will continue to be part of its strategy.

So, to maintain its dairy business and reach its new emissions goal, Nestlé is adhering to what the FAO says is the most straightforward way to reduce the carbon output of livestock: make dairy farms more efficient, in part by increasing how much milk the cows produce.

Nestlé says there’s an opportunity to improve milk yields by “three, four, five” times in less developed markets like Sri Lanka and Colombia, simply by making sure the cows themselves are healthier and living longer lives.

That means giving them better feed—a more locally-grown diet, for example, with a mix of corn and legumes, which can also help reduce their gassiness. It also means lowering their stress levels, particularly when it comes to heat; higher temperatures can negatively impact how much milk a cow produces. For example, sensors that track panting by cows individually—and as a herd—can manage barn ventilation and water cooling systems, Nestlé says. Other solutions, dairy experts say, include water misting, and making sure barns are designed to allow airflow and let cows move inside or outside as they like, so they can seek shade.

Alongside healthier cows, a lower-carbon farm requires a host of other changes, Nestlé says, particularly to the grazing land: tilling it less frequently, relying on fewer chemicals, and otherwise managing land use so that the cow’s diet is more natural. That will also result in land that’s less disturbed and better able to regenerate and preserve carbon naturally.

Nestlé’s plans point to the huge variations in how much milk is produced per cow around the world. A Danish cow produces on average around 10 metric tons of milk per year, while a Romanian cow produces just over 3 tons of milk per year, according to the European Dairy Association and EU statistics. But in much of the world, the yield per cow is even lower—two tons or less per year is standard. That leaves plenty of room for improvement globally.

“You can easily double, triple, quadruple that average,” Anton says, while safeguarding the health of the cow. “It is not an unrealistic project.”

It will, however, take years, he says, starting with an often fundamental adjustment: raising a breed of dairy cow that’s suited to the climate and environment of the country it’s in.

“You can’t get there within five years,” he says. “It takes you time, it takes structure, it takes a farm manager.”

Sacrifice the cow for the carbon?

While Nestlé says higher yields and healthier cows go hand in hand—and that their goal is not to increase yield at the expense of the cow’s welfare—not everyone is convinced that a lower-carbon cow is always compatible with a happier cow, especially amid a movement against the kind of industrial farming that can make a cow as efficient as possible.

Some tactics for reducing carbon impact, “can have a negative impact on animal welfare,” says Myles McCarthy, director of implementation at the Carbon Trust, a London-based consultancy that helps businesses reduce their carbon impact.

A dairy cow raised on less land, or even completely indoors, may have a lower carbon impact, for example—but is it a model consumers feel comfortable with? Meanwhile, organic dairy farms yield on average 30% less milk than conventional farms, according to EU statistics.

Even if you can sidestep those tradeoffs—which the dairy industry says it can—you’re still left with countless technical challenges over what climate change-resilient cows to breed, what to feed them, and how to responsibly manage grazing land, all while increasing productivity. That’s a shift that requires a huge amount of investment. And even with all that: can you really stop cows from burping methane?

“Fundamentally, that’s why the dairy [industry] is a challenge,” says McCarthy.

—China is the world’s biggest coal user. Can it break the habit?
—How the energy industry is using data to decarbonize itself
—Why solar execs say the game is already over for non-renewable energy
—BP’s CEO says he’ll sell oil projects to meet Paris climate accord goals
—Listen to our audio briefing, Fortune 500 Daily
Subscribe to The Loop, a weekly look at the revolutions in energy, tech, and sustainability