What Happens to the Clothes You Forget to Pick Up From the Dry Cleaner? 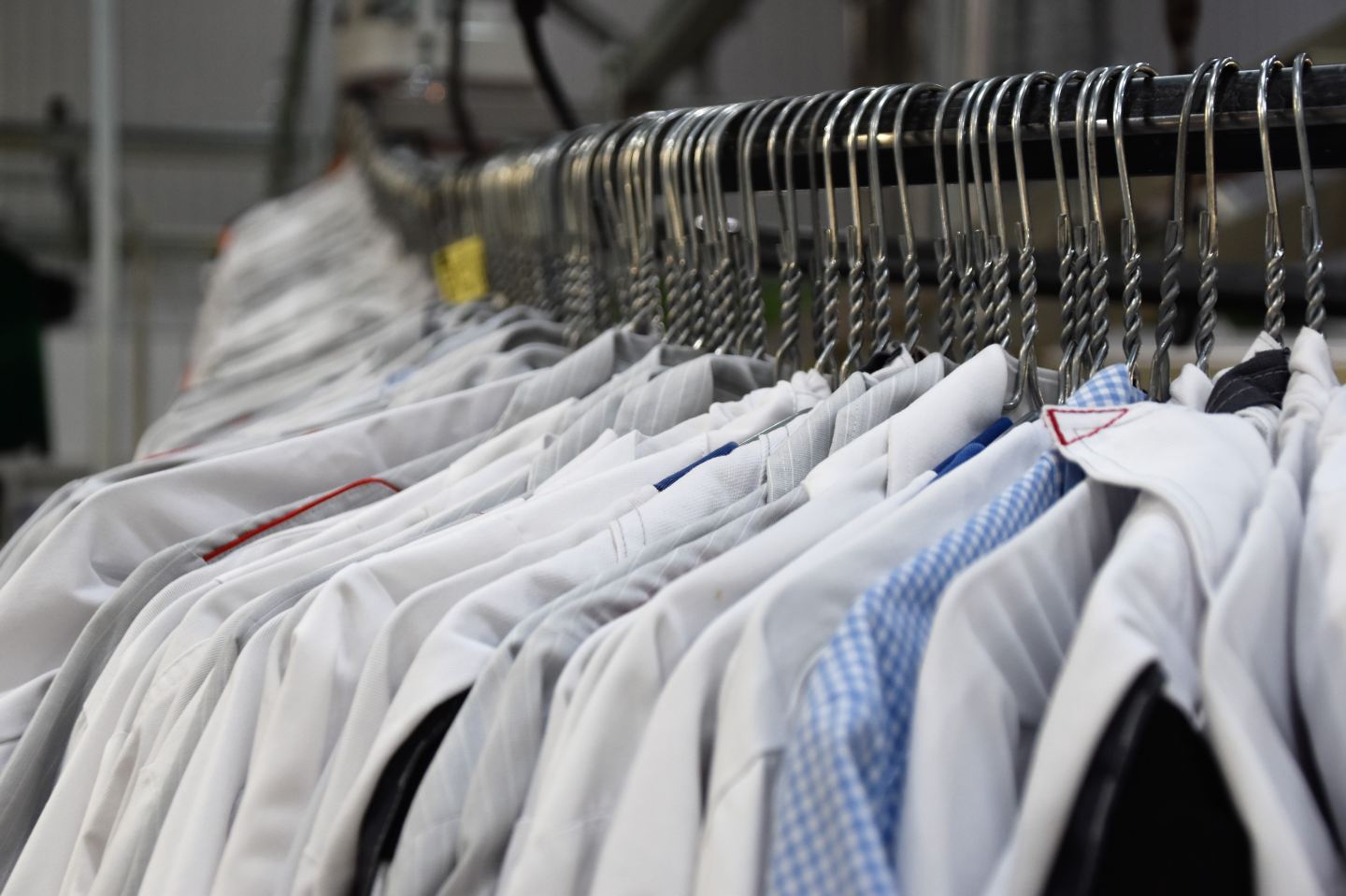 Both New York and New Jersey law actually requires dry cleaning premises to keep the garments for six months and then donate them to charity.
Waldemar Brandt

Here’s a true story: A woman from Brooklyn took a load of clothes to her dry cleaner. Two and a half years later, as the unclaimed garments took permanent residence on the cleaner’s racks, the store’s owner decided to donate them to charity. Six months after that, the woman returned to pick up her belongings. Upon hearing about the cleaner’s actions, she sued the business in small-claims court, which ruled in her favor and ordered the dry cleaner to pay her several thousand dollars.

The case, which took place almost two decades ago, prompted New York State to start regulating local dry cleaning businesses. There are no laws dealing with unclaimed property (across all types of industries) on a federal level. It is up to each state to regulate the matter, and just like laws concerning other businesses, rules regarding items abandoned at dry cleaners vary widely nationwide.

“In most cases, dry cleaning comes under whatever regulations are involved in consumer protection laws,” explains Nora Nealis, executive director of the National Cleaners Association (NCA), a U.S.-wide organization providing technical training for dry cleaners, in addition to advocacy and other services. “Abandoned property is not specific to dry cleaning; people who run storage operations have the same issue, shoe repair shops, eyeglasses that people never come back for.”

Much like liquor laws, rules on what dry cleaners have to store—and for how long—vary from state to state.
Nathan Dumlao

New York is governed by some of the strictest laws concerning the issue: Local dry cleaners are obligated to store garments for up to six months, after which they have the right to donate them to charity. Every business is required to post a sign alerting customers to the policy, printed on state-designated paper, in state-designated fonts and sizes. “Having said that,” Nealis says, “99% of all cleaners will reach out to you before they donate it because they would rather have the money than make the donation to charity.”

Some states require cleaners to keep garments for up to 90 days (Massachusetts) while others employ a 120-day rule (Ohio). Others yet order businesses to hold on to the property for a full year before getting rid of it. Interestingly enough, most states in the middle of the country are actually not regulated at all. “At least half the states are silent on it, they don’t have a law,” Nealis says. “Usually, it gets worked out between the cleaner and the customer. Very few customers have the kind of nerve to come in after three years and ask about a dry cleaning order. That’s just a lot of chutzpah!”

Crystal Cleaning Center in San Mateo, Calif., has witnessed a whole lot of that chutzpah. Lynnette Watterson has been at the helm of the 56-year-old family business since 2005 (her mother owned and operated the space before that) and admits to being “very reluctant to get rid of people’s clothes. I have this false illusion that, eventually, they’ll show up.” So certain is she about a customer’s eventual return that she claims to not even be familiar with California’s laws concerning the matter. (Shops are required to print a notice on each invoice, explaining they won’t be responsible for any items left unclaimed after 30 days.)

That modus operandi has led to some fabulous tales, becoming myths of a sort, at Crystal Cleaning Center, offering a glimpse into the human psyche and showcasing the ways individuals interact with and feel about their personal property.

Take the man who recently dropped off a $70 dry cleaning order and, after multiple calls, voicemails, emails, and text messages, finally called Watterson back to let her know that he had no plans on ever picking up his items. Irritated, the owner demanded to be paid. “I’m not usually that stern,” she says. “But he did give me a credit card number, and I’m donating his clothes [to charity].”

Watterson’s policies are not entirely about money. “I’m a really sentimental person,” she says before diving into the story of a middle-aged couple who walked into her shop roughly five years ago. They were “on a mission to find his mother’s wedding gown,” she recalls, describing the “distinctive” dress from the 1940s that she had been holding on to for eight years. The man’s mother had dropped off the gown but landed in assisted living before eventually passing and never claiming her dress. “They had been going from cleaner to cleaner all the way up the peninsula, and we had it,” Watterson says. “It was beautiful.”

Watterson’s sentimentality becomes even more apparent when she forwards a poem that she had penned herself to send to customers as a pickup reminder:

Yet dry cleaning is a business and, as such, financial matters do take center stage. “It’s a labor-intensive [job], and there is no upside to a cleaner having a whole lot of unclaimed garments,” says Nealis. What’s more: Abandoned items take up space that can’t be filled with other clothes.

Robert Shapiro, general manager at Milt & Edie’s Drycleaners & Tailoring Center in Burbank Calif.—a business that caters to “hundreds of celebrities” and is open 24 hours a day, seven days a week—reveals that the shop’s owners have invested in a warehouse space to store all their unclaimed items. “We keep it in the [shop] for three months and then in the warehouse for a year,” he explains. “If something looks expensive, we keep it indefinitely.”

Some say a wedding gown is the most important garment a person will ever buy or wear. But gowns are also frequently abandoned at the dry cleaner’s.
Celia Michon

As for the reasons why folks might leave their belongings behind, common themes involve a move to a different neighborhood, a job loss, the price of dry cleaning, simple forgetfulness, and—surprisingly most frequently—the dissolution of a marriage. “With about 1,000 customer transactions per day, we lose about 2% revenue because of unclaimed items,” Shapiro says.

Wedding gowns seem to be some of the most common items left behind at these local businesses: “It speaks on the statistics on the survival of marriage,” says Watterson. “Once their marriage is over, they don’t want the gown [anymore].” Given the amount of work involved in properly cleaning and storing a wedding gown, the object most often left behind is one that ends up costing businesses most. “If you threw in wedding gowns,” says Watterson, “[we’re missing out] on thousands of dollars a year.”

Although clearly aware of the problem, most dry cleaners don’t seem to be too adamant about finding a nationwide solution and are content to follow state laws or self-imposed store policies instead.

The head of the NCA, however, can think of a few solutions: asking customers to leave credit cards on file or make deposits upon drop off, for example, or even offering pickup and delivery services. (“With delivery comes payment,” Nealis says.)

Mostly, Nealis wishes folks would be a bit more empathetic. “You wouldn’t ask a plumber to come in and make a repair and then say you won’t pay him because you’re not going to use the sink anymore,” she says. “[Some customers] think that, because they don’t have the clothes to use, it somehow mitigates the loss of being paid for the service. Sometimes it’s just a question of people being made aware, and once they are, they’re quicker to come in.”

—Curious what Jony Ive might design after Apple? This ring might be a clue
—Tips and treats for stress-free travel with pets
—This Brooklyn movie theater is the smallest in the world
—This photographer is trying to shoot all 431 Frank Lloyd Wright buildings
—How Etsy crafted an e-commerce comeback
Follow Fortune on Flipboard to stay up-to-date on the latest news and analysis.