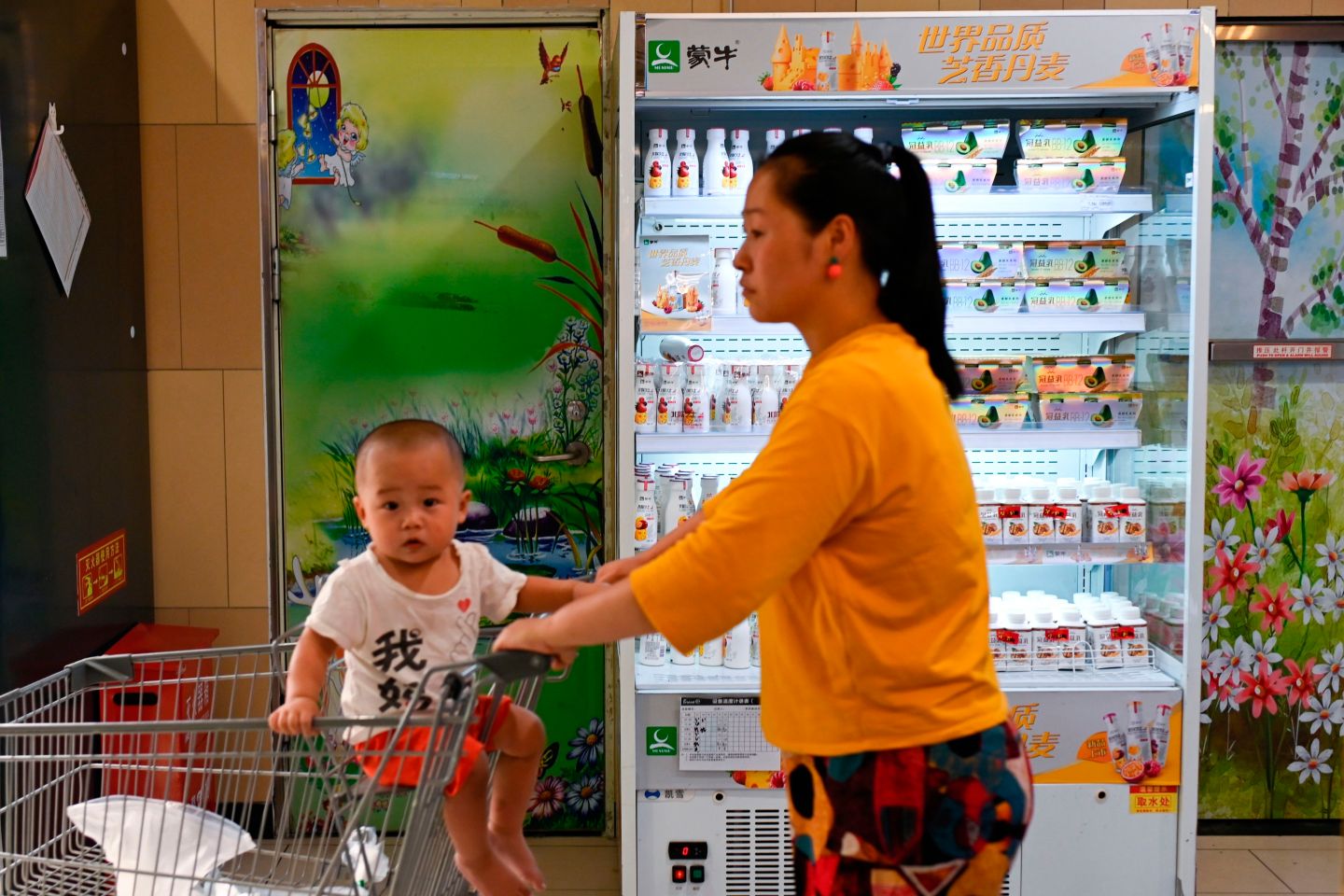 A customer and child are seen past a refrigerator displaying Mengniu milk products at a store in Beijing on June 24, 2019. - Coca-Cola and Chinese dairy firm Mengniu have signed a deal to become joint sponsors of the Olympic Games from 2021 to 2032, IOC chief Thomas Bach announced on June 24. (Photo by WANG Zhao / AFP) (Photo credit should read WANG ZHAO/AFP/Getty Images)
Wang Zhao—AFP/Getty Images

China’s largest milk maker, Mengniu Dairy, is expanding its presence overseas, putting in a $1.03 billion offer for Tanzania-based Bellamy’s Australia, the parent company of infant formula maker, Bellamy’s Organic. The purchase comes as Beijing advocates self-sufficiency in the baby formula market—which accounted for 70% of China’s total $10.65 billion worth of dairy imports last year —and has encouraged domestic players to go out and buy foreign rivals.

Bellamy’s announced Mengniu’s proposed cash purchase on Monday morning with company deputy chair John Murphy saying in a statement that the board has “unanimously concluded that the Scheme is in the best interests of shareholders,” and is advising shareholders to accept the offer. The company expects a deal to be closed by the end of the year

Mengniu’s A$12.65 ($8.71) per share offer is a massive 59% premium on Bellamy’s Friday share price, which had slumped 62% from a peak of A$22.08 per share in March 2018 to just A$8.34. The plummet was predicated by a policy change in China that required Bellamy’s, along with other foreign manufacturers, to acquire a license from the State Administrator for Market Regulation (SAMR) to sell its product in stores.

The SAMR has so far failed to provide the Australian company with the necessary permits. According to Bellamy’s annual reports, which list the twelve months through to June, offline Chinese sales fell from $25.39 million in 2017 to zero in 2019. However, investors seem to think new Chinese ownership will expedite SAMR approval. Following the announcement Monday, investors rushed in and pushed Bellamy’s stock up 56%.

In Bellamy’s most recent annual reports, the company acknowledges that a “substantial” portion of its Australia sales are actually routed to China through online re-sales. Besides China’s official imports, there is a vast grey market of independent dairy re-sellers who buy tins of infant formula from stores and sell them in China for up to three times profit. The demand is so great that some stores in Australia have implemented two-tin limits on how much formula individuals can buy at once.

Mengniu, however, has been actively expanding abroad for years. The Inner Mongolia-based company acquired New Zealand’s Yashili Dairy for $200 million in 2013 and purchased another Australian dairy company, Burra Foods, for $300 million in 2016.

In a press release announcing the transaction, Mengniu CEO Jeffrey Lu said that his company will invest more in Australia’s local dairy industry to boost capacity and sales at Bellamy’s, noting the Australian firm’s “leading organic brand position [and] local operation and supply-chain are critical to Mengniu.”

However, given the benign nature of Bellamy’s milk business, it seems unlikely the deal will run up against Australia’s national security protections.

—Change the World 2019: See which companies made the list
—America’s CEOs seek a new purpose for the corporation
—Why the next recession may feel very different than 2008
—After the Capital One breach, should big business fear the public cloud?
—10 questions to ask in a job interview to really stand out
Subscribe to Fortune’s The Loop newsletter for the latest on the revolutions in energy, technology, and sustainability.