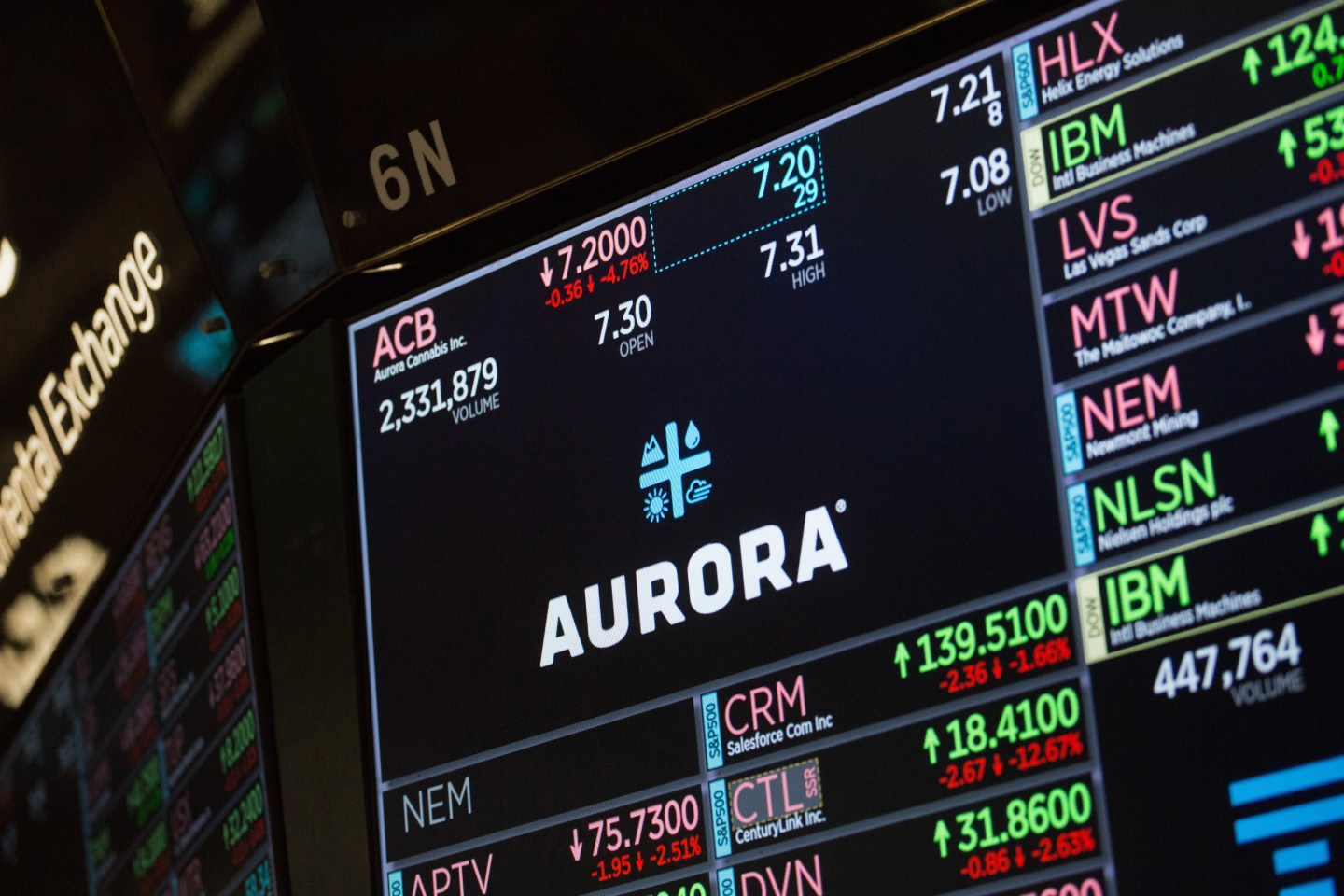 The Street didn’t get too much of a high from Aurora Cannabis’ 4th quarter earnings late Wednesday, but the cannabis company is still reporting strong growth.

Aurora’s stock dropped over 9% in premarket trading Thursday. The millennial-favorite pot stock missed earnings expectations, reporting revenues of C$99 million (roughly $75 million) versus their own estimates of C$100-$107 million in August (and even below Wall Street’s). But analysts say not to be worried.

“It’s interesting what the market digests out of this,” Canaccord Genuity’s Matt Bottomley told Fortune. “If they hadn’t had pre-released anything, I think this would be considered a home run quarter.” Despite the miss making investors uneasy, Bottomley believes there were “certainly more positives than negatives.”

It’s pretty clear that Aurora shouldn’t have overshot expectations, but all considered, the pot stock’s quarter was actually not all bad.

In fact, Morningstar’s Kristoffer Inton says as a growth company in a growth industry, “they’re doing what they’re supposed to be doing.” Inton added, “In reality, they may not hit what their guidance is, but it’s not because it’s impossible, it’s just further down the road.”

Aurora missed revenue expectations by roughly C$1 million on the low end, but actually reported core cannabis revenues of C$95 million—at the top end of their projections of C$90-$95 million (which, to Canaccord Genuity’s Bottomley, is the metric that really matters). That’s a 52% increase from the same quarter last year.

The earnings miss came primarily from Aurora’s ancillary businesses—which, while not insignificant, are not the main drivers of what Aurora is: a cannabis company.

“The topline miss on guidance is disappointing, [but] my view is that that is immaterial to anything fundamental,” Bottomley suggests. “One, because we’re talking about a $1 million miss, and two, it’s the segment of their business that has nothing to do with selling cannabis. I’m not saying the ancillary businesses don’t have value, but it’s not really how the company should be judged in my view.”

What Aurora should be judged on, however, is their much-touted plan to profitability. While the cannabis company previously expected adjusted EBITDA to be positive by the end of the calendar year, Aurora execs suggested on Thursday that they would, instead, be profitable in the near term—what Bottomley calls “a bit of a drag to the story.” He suggests the backtracking on profitability is aimed at tapering expectations if the next two quarters plateau a bit.

But with Aurora’s peers still “a ways away” from profitability, according to Bottomley, the pot company may be better positioned than the markets think. In fact, in the Canadian cannabis market, Aurora is actually pulling ahead of many of the pot powerhouses.

Aurora is growing faster than competitors

The cannabis company is actually among the top performers in Canada right now, with some of the highest revenues ever posted for the industry this quarter. In fact, even major player and competitor Canopy Growth reported revenues roughly 25% below Aurora’s, according to Canaccord Genuity.

“In the Canadian market, I think it’s clear that on a trailing basis, whether you want to call that six months or a year, I think Aurora has outperformed Canopy in terms of what they’re doing in Canada,” Bottomley says. While he suggests that comparing Aurora and Canopy on an overall basis is “apples and oranges,” he does believe Aurora’s domination in Canada and relative proximity toward achieving profitability make it stand out among the large-cap pot stocks.

To boot, Aurora’s stock is up 12% for the year—while Canopy’s is actually down 8% year to date. Other competitors like Cronos and Tilray are also trailing Aurora, with stocks up only 0.6% and down a whopping 56% respectively. And boasting one of the highest gross margins among the group is certainly encouraging for investors.

“Aurora, for now, wants to be the production guy,” Inton suggests. “They’re very focused on being a big, low-cost producer, and it’s already showing—that’s why they have the highest gross margins among the peers.”

But it’s not all good news for Aurora.

It comes with the turf, but part of Aurora’s earnings miss is due to their dependency on Canada’s regulations. In fact, Inton says the pot company is “too beholden to the pace of the regulatory front” to be able to control earnings more tightly. Aurora’s lack of a strategic partner (like Constellation Brands for Canopy Growth) may end up putting pressure on the company as it aims to expand to the U.S.

“The two big questions are, if and when they find that big partner, because that ultimately will help shape where they expect their strategy to go, and two, how do they enter the U.S. now that they’re saying they want to?” Inton says.

Another thing Aurora has been very clear on is their intention to invest more in vapes and alternative cannabis products. And while Aurora likely won’t have to worry too much just yet, the U.S.’s proposed ban on vapes following a vaping health crisis in the States could be something to watch, as Bottomley suggests investors “should be spooked.”

—The bull and bear case for investing in WeWork before its IPO
—Are we near a recession? The godfather of the inverted yield curve says it’s “code red”
—How the real time payments revolution is pushing Mastercard beyond cards
—Could Baker Mayfield and Odell Beckham, Jr. be worth more to Cleveland than LeBron?
—Listen to our audio briefing, Fortune 500 Daily
Follow Fortune on Flipboard to stay up-to-date on the latest news and analysis.