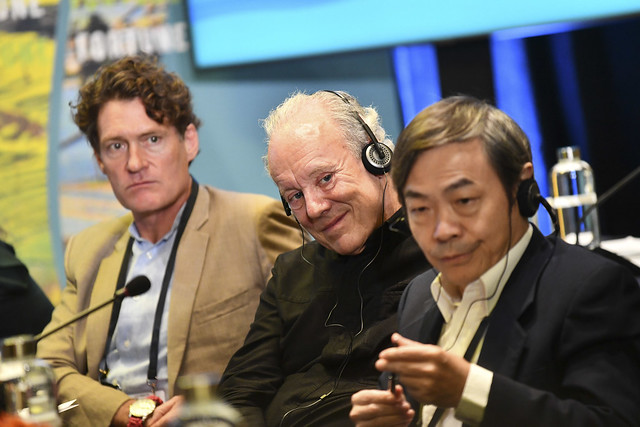 A panel of investors, business innovators, and one filmmaker convened at Fortune’s Global Sustainability Forum in Yunnan, China on Thursday to swap insights about how to tackle this issue. They agreed on the need for a fundamental shift in the ways we talk about the plastic waste problem, like no longer describing post-use plastic as “waste” or calling plastic purchasers “consumers.”

“We need to change the terminology. This isn’t post-consumer waste—it’s not waste. This is a resource,” filmmaker Craig Leeson, who directed the 2016 documentary A Plastic Ocean, said.

Leeson said confronting the issue requires changing “the economic and financial paradigms with which we operate as a society, because the systems that we have in place right now aren’t working.” He added that this change must be carried out “collectively, on a global scale.”

Rob Kaplan, founder and CEO of Circulate Capital, said he does not “see a pathway in the near-term for global alignment [on plastics regulation].” Rather, regulation will be “much more localized and much more complex” because “nobody wants an international body telling them how to regulate their own waste,” he said.

Kaplan, a self-described pragmatist, did agree with Leeson that plastic should be viewed as a resource, because it can be a great investment opportunity. He said there is a consensus among researchers that the plastic issue requires a multi-pronged solution.

Bill McDonough, the chief executive of McDonough Innovation, said that even using the term “consumers” reflects our warped view of the issue.

“We call people consumers—they’re not consuming. These products cannot be consumed, because they’re not biodegradable. We’re actually customers – these things are providing services.” McDonough said. “We have to eliminate the concept of waste from the beginning […] and start designing for next use, which is the circular economy. And do it safely.”