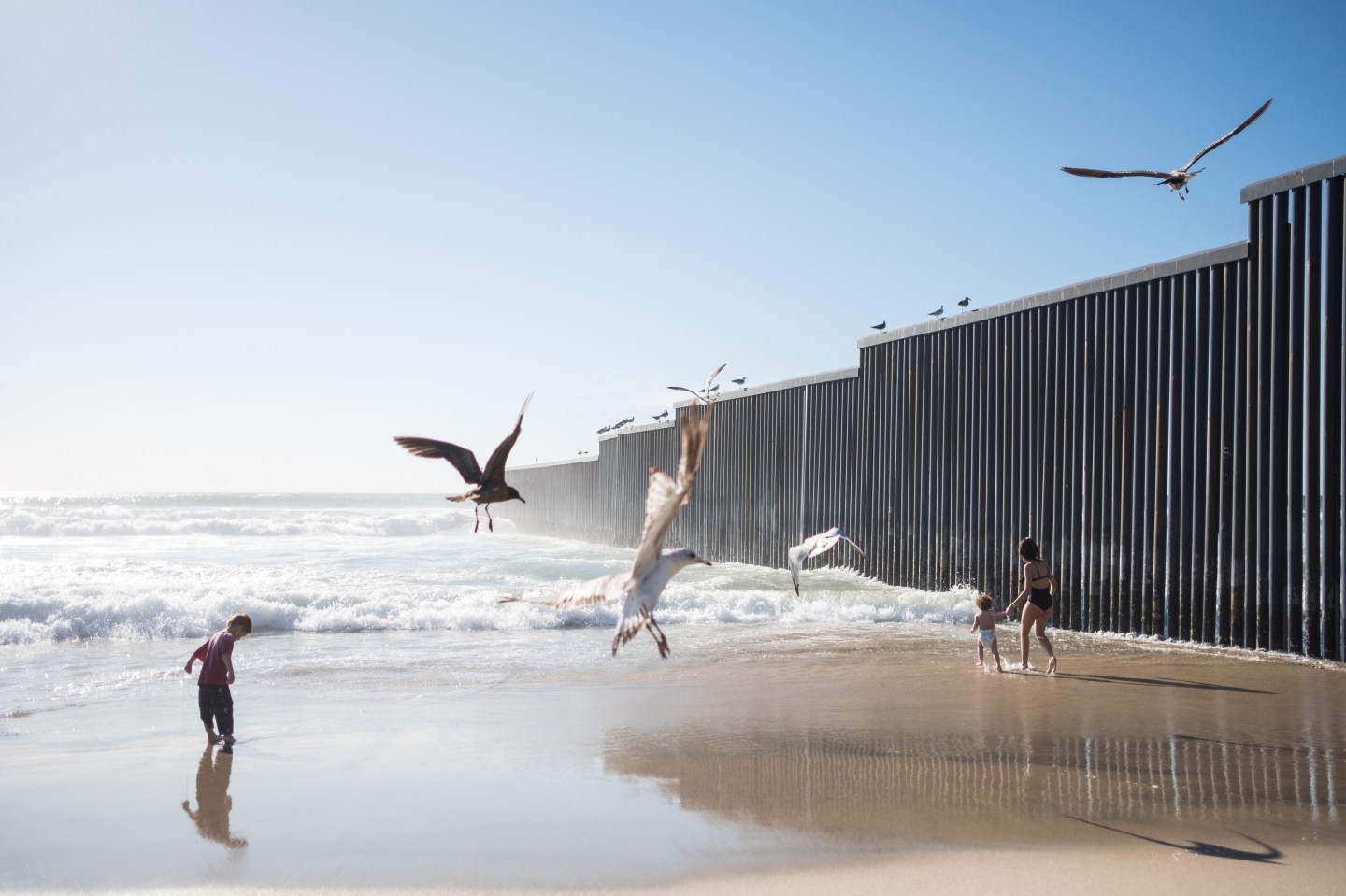 Kids are seen playing near the dividing border wall between the United States and Mexico where many asylum seekers have crossed. In February 2019, around 76,000 fled from the southern border into the United states in order to find a better live. (Photo by Megan Jelinger/SOPA Images/LightRocket via Getty Images)
Megan Jelinger—SOPA Images/LightRocket via Getty Images

Defense Secretary Mark Esper on Tuesday approved the use of $3.6 billion in funding from military construction projects to build 175 miles of President Donald Trump’s wall along the Mexican border.

Pentagon officials would not say which 127 projects will be affected, but said details will be available Wednesday after members of Congress are notified. They said half the money will come from military projects in the U.S., and the rest will come from projects in other countries.

Esper’s decision fuels what has been a persistent controversy between the Trump administration and Congress over immigration policies and the funding of the border wall. And it sets up a difficult debate for lawmakers who refused earlier this year to approve nearly $6 billion for the wall, but now must decide if they will refund the projects that are being used to provide the money.

Elaine McCusker, the Pentagon comptroller, said the now-unfunded projects are not being canceled. Instead, the Pentagon is saying the military projects are being “deferred.” The Defense Department, however, has no guarantee from Congress that any of the money will be replaced, and a number of lawmakers made it clear during the debate earlier this year that they would not fall for budget trickery and sleight of hand to build the wall.

“It is a slap in the face to the members of the Armed Forces who serve our country that President Trump is willing to cannibalize already allocated military funding to boost his own ego and for a wall he promised Mexico would pay to build,” said Senate Democratic Leader Chuck Schumer of New York. He said the funding shift will affect the U.S. Military Academy at West Point.

Trump declared a national emergency in February in order to use military construction and other federal funds to build the wall after Congress provided only a portion of the $5.7 billion he wanted.

The Pentagon reviewed the list of military projects and said none that provided housing or critical infrastructure for troops would be affected, in the wake of recent scandals over poor living quarters for service members in several parts of the country. Defense officials also said they would focus on projects set to begin in 2020 and beyond, with the hope that the money could eventually be restored by Congress.

“Canceling military construction projects at home and abroad will undermine our national security and the quality of life and morale of our troops, making America less secure,” said House Speaker Nancy Pelosi, a California Democrat.

According to the Pentagon, the money will be used to build 11 border projects and will involve either replacing existing barriers or adding secondary fencing in key areas. The projects involve border sections on Defense Department land, federal land and private property. One of the first projects will likely be construction of barriers at the Barry M. Goldwater Air Force Range in Arizona, because the land is already owned and controlled by the Pentagon.

McCusker said it’s too difficult to tell how long it will take for the wall construction because some of the sections are on private land. It will include sections in Laredo and El Paso, Texas; San Diego and El Centro, California; and Yuma, Arizona.

Army Lt. Gen. Andrew W. Poppas, director of operations for the Joint Staff, told reporters that shoring up the wall could eventually lead to a reduction in the number of troops who are deployed along the border. About 3,000 active-duty troops and 2,000 members of the National Guard are being used along the border to support Homeland Security and border patrol efforts. About 1,200 of the active-duty troops are conducting surveillance in mobile truck units.

Pappas and other officials couldn’t say how soon or by how many the troop numbers could go down. Pentagon spokesman Jonanthan Hoffman said the troops would remain at the border for as long as they are needed. It could depend in part on the number of attempted border crossings by migrants and other issues.

The American Civil Liberties Union said Tuesday that it would seek a court order blocking use of the funds as part of its lawsuit challenging the president’s abuse of emergency powers to secure funds Congress had denied.

—Will gaffes hurt Biden’s chances of a 2020 win? Strategists are divided
—These are the 2020 senate races to watch
—The Trump administration has been sued more than any other since 1982
—MSNBC climate change forum will give a voice to those denied the DNC debate stage
—Trump thinks he is winning the trade war, but the data tell a different story
Get up to speed on your morning commute with Fortune’s CEO Daily newsletter.