Naomi Osaka Shows Us What True Mentorship Looks Like: The Broadsheet 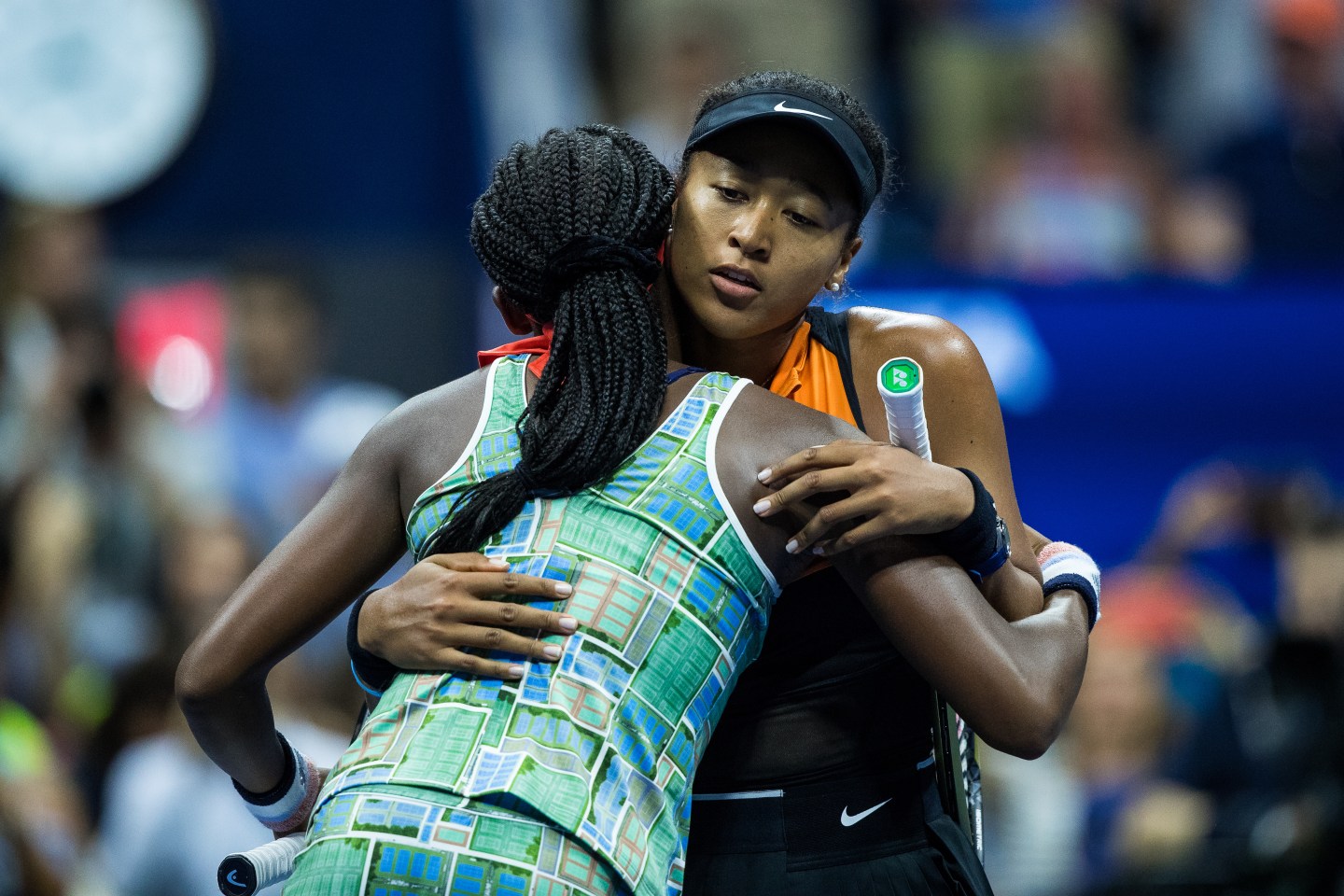 Good morning, Broadsheet readers! KPMG partners who quit because of their colleague’s alleged bullying launch a no-macho-behavior-allowed firm, Carrie Lam can’t resign, and we won’t soon forget that magic moment between Naomi Osaka and Coco Gauff. Have a marvelous Monday!

- Be like Naomi. Another mass shooting, an encroaching hurricane, a deadly boat fire... It was a tough long weekend! So I hope you’ll pardon me for clinging to an event that, while perhaps not geopolitically Earth-shaking, helped stop the Labor Day news cycle from sliding into a complete fog of gloom.

I’m referring to the U.S. Open match between last year’s champ, Naomi Osaka, and Coco Gauff, the 15-year-old phenom who went from playing the junior tournament to the third round of the Open’s big leagues in just 12 months.

The pair faced off in Arthur Ashe on Saturday night for what turned out to be a short and decisive match: Osaka bested her young rival 6-3, 6-0. But the real can’t-look-away moment came after Osaka’s win, when she approached an emotional Gauff to ask her to join the post-match interview—offering Gauff a chance to share her disappointment with a supportive crowd rather than taking it, alone, to the locker room. (You can watch the players’ exchange and on-court interview here.)

Osaka knows something about processing her emotions in front of crowd: As last year’s Open we watched her tears fall even as she raised the winner’s cup, reeling from a final that ended in boos after a clash between the umpire and Osaka's hero Serena Williams. But that wasn’t the moment she harkened back to in the post-match interview. Instead, she addressed Gauff’s parents in the stands:

“I remember I used to see you guys train in the same place as us, and for me the fact that both of us made it, and we’re both still working as hard as we can, I think it’s incredible. I think you guys are amazing, and I think, Coco, you are amazing.”

It was lovely to see Osaka, who is still only 21, tap into her experiences as a young star to offer guidance and encouragement to Gauff in that moment. Of course, it was just that—a moment—and the tournament went on. Gauff won her Sunday doubles match with partner Caty McNally (they go by "McCoco"), while Osaka closed out her 2019 U.S. Open story on Monday, losing her fourth round match to Belinda Bencic.

Yet as we saw Saturday night, the winning and losing, while certainly important, are just one piece of a much larger picture. It's my hope that we can all go into the fall, a season when many of us will return our focus to the professional or educational aspects of our lives, inspired by Osaka. Is there a moment when a younger or less experienced woman could use your support, counsel, empathy? Be like Naomi—grasp it.

- Running while female. Following Sen. Kirsten Gillibrand's recent decision to end her 2020 presidential campaign (making her the first of the six original female candidates to do so), this story examines what the apparent failure of her "fiercely feminist message" says about the obstacles still faced by women who pursue the nation's highest office—even when there's more than a single woman in the race. New York Times

- Stuck in the job. In leaked audio of a meeting with business executives, Hong Kong Chief Executive Carrie Lam was heard saying she would quit if she had "a choice" and that causing this much damage to Hong Kong was "unforgivable." Authorities in Beijing are keeping her in the job as protests continue, she implied. Guardian

- A new kind of consultancy. Star partners Maggie Brereton and Ina Kjaer quit KPMG over bullying claims against one of their colleagues. Now the pair are launching a rival firm that will break from "macho" industry practices: no "waste[d] talent" by relying on an after-hours working culture, no all-nighters for client demands, and a goal of a zero percent gender pay gap from the outset. Financial Times

- All dressed up. Why are prominent women—think Sheryl Sandberg, Nancy Pelosi, Elise Stefanik—opting for the power dress rather than a power suit these days? The sleek, form-fitting garments "project self assuredness," can easily transition from day to night, and unlike a multi-piece outfit, requires no adjusting. What's more, says designer Zac Posen, a power dress "allows you to take ownership of your femininity." Wall Street Journal

MOVERS AND SHAKERS: Pearl Collings was named CEO of Contently.

- An aide ousted. President Donald Trump's personal assistant Madeleine Westerhout, who served as a gatekeeper of the Oval Office, was ousted from her job late last week for reportedly talking ill of Trump's children during an off-the-record dinner with reporters. Trump later called Westerhout a "very good person" and commended her work. Having joined the administration after the 2016 election, Westerhout was considered one of the few constants in a presidency marked by high staff turnover. Politico

- God save the Queen (from Brexit). Queen Elizabeth had an odd week last week as she signed off on Prime Minister Boris Johnson's request to suspend Parliament as a way to strengthen his Brexit position. And her involvement in Brexit could continue as Johnson's rivals pursue legal action against his move and as a showdown between Johnson's administration and MPs looms. Fortune

- Mad about Helen. Actress Helen Hunt talks to The Guardian about returning to the screen in a Mad About You reboot and a new BBC drama World on Fire, and she addresses rumors that she "stepped away" from Hollywood following blockbusters like What Women Want and Cast Away. “It’s so funny when people ask: ‘What happened to you?’ Well, I had a baby—I made a whole person—and I co-wrote, directed and produced two entire films so it didn’t seem so quiet to me. There’s a difference between working hard and being famous.” Guardian

Normani and the work of a pop princess New Yorker

These photos celebrate the beauty of postpartum bodies Refinery29

"I think the good thing about the #MeToo movement is that it's giving permission to women to be taken seriously."

-Musician Sheryl Crow, whose new album Threads is out now