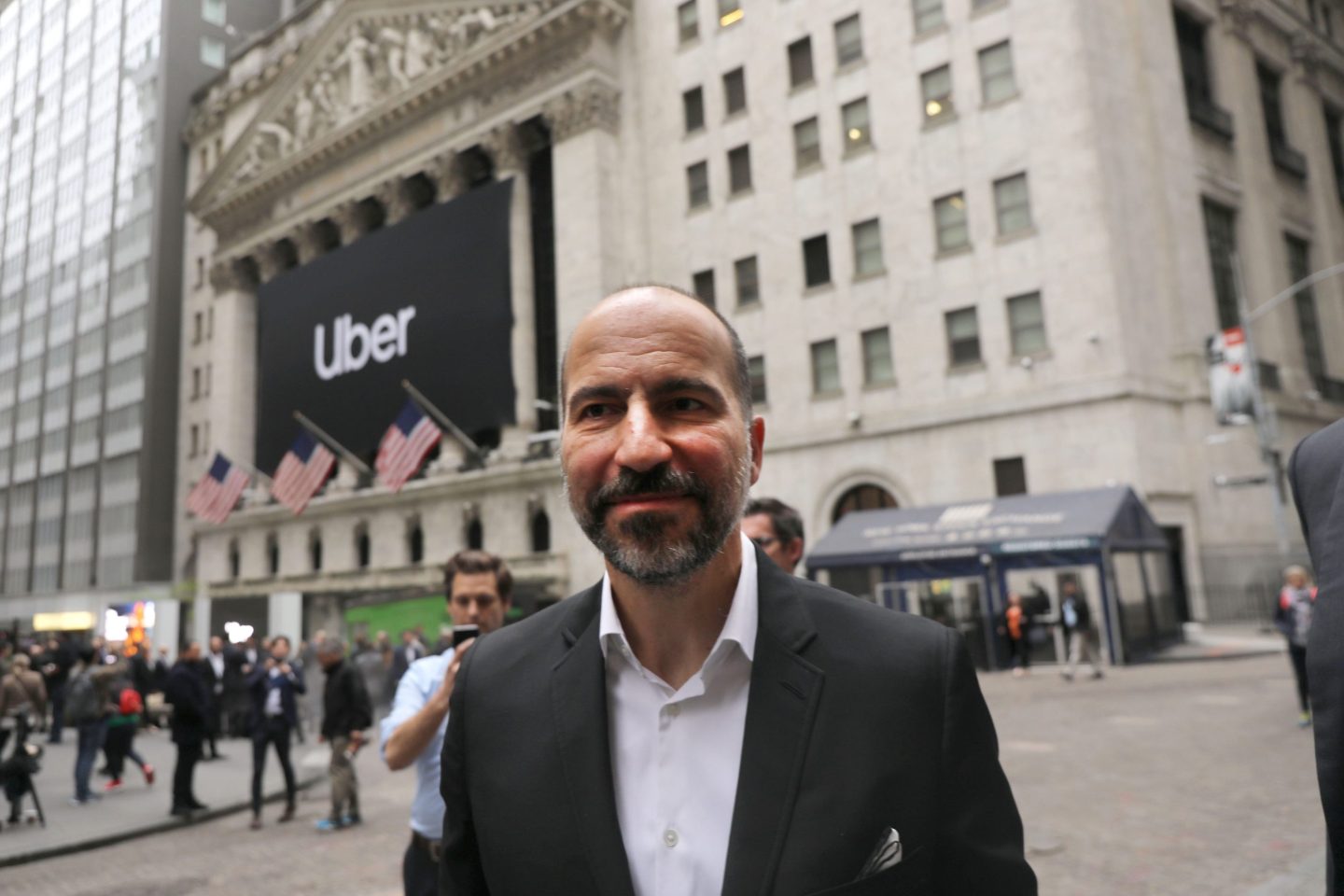 Uber CEO Dara Khosrowshahi walks outside of the New York Stock Exchange on the day of the ride-hailing company's highly anticipated initial public offering on May 10, 2019.
Spencer Platt—Getty Images

When Wall Street welcomed Uber and Lyft to the public markets earlier this year, it was heralded as a defining moment for an entire generation of tech unicorns that, until recently, had mostly eschewed the rite of passage that is an initial public offering.

But in the wake of their IPOs, both ride-sharing giants have found that life as a public company is perhaps not all that it’s cracked up to be. Publicly-traded status, of course, means accountability to shareholders above all—a tricky proposition given that both companies, in their quest for growth, continue to post heavy losses that raise questions about when they’ll manage to attain profitability.

Lyft, which tapped the public market first in late March, has already experienced one particular challenge also faced by fellow tech behemoths like Facebook, Twitter and Snap in recent years. After going public at $72 per share and a valuation exceeding $24 billion, Lyft saw its stock nosedive in a matter of days—and by mid-May, the company was handed a proposed class action lawsuit by shareholders who claimed their were misled by Lyft’s S-1 prospectus filed in advance of the IPO.

The lawsuit—one of no fewer than three separate class action complaints filed against the company—alleges that Lyft made several inaccurate or misleading statements in its prospectus. Those include allegedly misrepresenting its share of the North American ride-hailing market (it claimed a 39% market share, despite Uber laying claim to 65% share in its own S-1) and failing to account for a recall of 1,000 electric bicycles in its bike-sharing program in New York City. (A spokesperson for Lyft declined to comment for this story.)

Whether the allegations are proven valid, and found to have actually contributed to Lyft’s underwhelming stock performance, remains to be seen. But what’s clear is that post-IPO, class action lawsuits are on the rise—and tech-focused firms like Lyft, whose growth-oriented private models have often failed to translate to success on the public market, have found themselves particularly prone to litigation at the hands of disappointed investors.

“You’ve got a lot of hype around these IPOs—a lot of excitement and a lot of revenue growth, but probably not a lot of profits,” according to Jeff Lubitz, executive director of securities class action services at Institutional Shareholder Services (ISS). “When a stock doesn’t have the momentum that people expect, the litigation follows.”

Lubitz cites ISS data that shows an increase in IPO-related securities litigation in recent years, both in terms of the number of such lawsuits and their share of securities-related class actions at large. While IPO class actions represented only 4% of all securities class action lawsuits between 2008 and 2018, that figure has steadily risen over the last decade, climbing to 7.5% (44 of 584 cases filed) in 2018. The trend continued through the first half of 2019, when 25 of the 280 securities class lawsuits filed in the U.S., or 8.9% of all cases, related to IPOs.

Shareholder lawsuits against publicly-traded companies are nothing new; indeed, most fall under guidelines established by the Securities Act of 1933 and the Securities Exchange Act of 1934, two landmark pieces of legislation that have loomed large over the financial markets in the U.S. since the Great Depression. The dot-com bubble at the turn of the century was also met by a wave of such litigation—most notably, a massive consolidated class action against more than 300 companies that was eventually settled for $586 million in 2009.

But the extent to which investors and plaintiffs’ securities attorneys have used the laws’ provisions prohibiting companies from making false or misleading statements—whether made knowingly or not—to prospective shareholders has grown in recent years. It is a dynamic that has particularly afflicted companies from more volatile, capital-intensive sectors like tech and life sciences, where overheated private valuations have often given way to disappointing share price performance.

“More companies that are either not profitable or barely profitable are going public, and that’s going to cause more volatility in the stock, particularly after it starts trading,” according to Jason Halper, chair of law firm Cadwalader’s global litigation group, which defends companies in class action securities lawsuits. “When you have a stock price drop and the financial performance is poor, that’s a plaintiff-friendly situation.”

Meanwhile, the Supreme Court’s Cyan v. Beaver County Employees Retirement Fund decision last year has also proven a boon to IPO-related lawsuits. The ruling determined that class actions brought under the Securities Act of 1933 can also be filed in state courts in addition to federal courts—allowing suits to be filed in more plaintiff-friendly state jurisdictions.

And with a more litigious environment around IPOs than ever before, it’s become increasingly difficult for companies looking to go public to secure the directors and officers (D&O) insurance that they need. Insurance premiums and deductibles have both been on the rise, with many D&O insurance providers being more selective in the deals they underwrite and some even stepping away from the IPO market entirely.

“I’ve never seen a D&O market as we see it today, specifically in the pricing and rate environment for these IPO deals,” says Laura Coppola, head Allianz’s financial lines division in North America.

Coppola says premiums and deductibles have risen more than 200% since Allianz entered the North American D&O insurance market in 2015, with the increase “driven by higher defense costs and a very creative plaintiffs’ bar” that is bringing more class action lawsuits than ever.

“I think a lot of [D&O insurers] have said they’re not going to underwrite IPOs right now,” according to Christine Williams, CEO of Aon’s financial services group, which brokers D&O insurance transactions on behalf of insurers and corporate clients. “Certainly, there are some insurers that don’t want to deploy a lot of capital on tech companies.”

It’s not hard to find defense attorneys, insurers and underwriters ready to accuse the plaintiffs’ bar of “trolling” for class actions against newly-minted public companies, who under the Securities Act of 1933 are liable to face such lawsuits for up to three years after their IPO. But as Glenn Phillips, a partner at plaintiffs’ litigation firm Milberg Phillips Grossman, put it, “the plaintiffs’ bar isn’t the one making the materially false representations.”

Phillips’ colleague Robert Wallner, also a partner at the law firm, noted that plaintiffs’ firms are often “taking a risk” in pursuing IPO-related class action litigation—given that such cases can often stretch years and require firms to spend millions of their own dollars before a resolution is reached.

“A firm has to spend millions of dollars in time and out-of-pocket costs, and we don’t get paid until [the case] is over,” Wallner notes. “If a case is dismissed because the judge says the allegations do not meet certain requirements, the law firm is potentially out millions of dollars. This financial pressure builds in tremendous discipline and forces firms like us to be very careful and selective.”

As numerous legal sources mentioned, IPO-related class actions almost never go to trial. If the suit is not dismissed outright by the court, it usually ends up in mediation—which, while allowing for compromise, is still an arduous, expensive, years-long process. What’s more, the settlements eventually reached at the end of the mediation process can often underwhelm, even before accounting for the sizable chunk of damages used to pay lawyers’ fees.

Facebook, for instance, only settled its own IPO class action, which was filed in 2012, in November 2018. The company agreed to pay shareholders $35 million—a win for the investors, albeit a relative drop in the bucket for a corporation with a market capitalization exceeding $511 billion.

Which brings us to Uber. While the company has yet to be hit with a class action like its fellow ride-sharing giant, at least one law firm, the California-based Gibbs Law Group, is already “investigating allegations that investors may have overpaid if they bought stock at Uber’s IPO price,” according to the firm’s website. (Representatives for both Uber and Gibbs Law Group did not return requests for comment.)

In its appeal to Uber shareholders, the law firm cites the company’s precipitous fall in share price in the wake of its public debut in May—and while the stock rebounded to hover around its $45 IPO price for most of the summer, recent revelations of a $5.24 billion second-quarter loss and slowing revenue growth sent shares spiraling this month. Uber’s stock closed at $33.43 per share on Friday, which would drop the company well below the threshold of a 10% decline in price that most legal sources say represents a harbinger for an impending securities lawsuit.

Yet a free-falling stock alone is not enough. “You need to be able to point to something in the Uber prospectus and say, ‘We now know something was wrong, and the stock dropped [as a result],’” says Sean Coffey, a partner at Kramer Levin and chair of the law firm’s complex litigation group. “You have to have some omissions or misstatements—and even then, when the stock drops, the company can say, ‘Hey, we told you about this in our [prospectus’] risk factors, this isn’t a false statement.’”

To that end, companies are beefing up their risk factor disclosures in their pre-IPO filings like never before in an effort to protect themselves from potential lawsuits. Uber, for its part, disclosed 47 pages worth of potential hazards in the “Risk Factors” section of its S-1, and sources with knowledge of the company’s pre-IPO underwriting process say the company’s legal counsel made sure to include “every possible thing” that could conceivably expose it to legal action.

Uber’s lengthy risk factors disclosure was certainly informed by the company’s past as far as corporate governance practices are concerned, but its legal advisers were also well aware of the current environment fueling shareholder class actions. With its rivals at Lyft already dealing with one such lawsuit in the wake of a similarly disappointing debut on the public markets—and plaintiffs’ law firms already hovering in search of disgruntled shareholders willing to take them to task—only time will tell if Uber, too, will soon find itself caught in years’ worth of legal red tape.

“For a high-profile company, any stock price decline from the IPO on poses a high risk of some form of shareholder lawsuit, because so many people are watching their performance and reading the media coverage,” says Peter Doyle, a partner at law firm Proskauer Rose’s litigation department.

As Doyle put it, “It only takes one shareholder, or one plaintiff attorney, to bring the claim.”