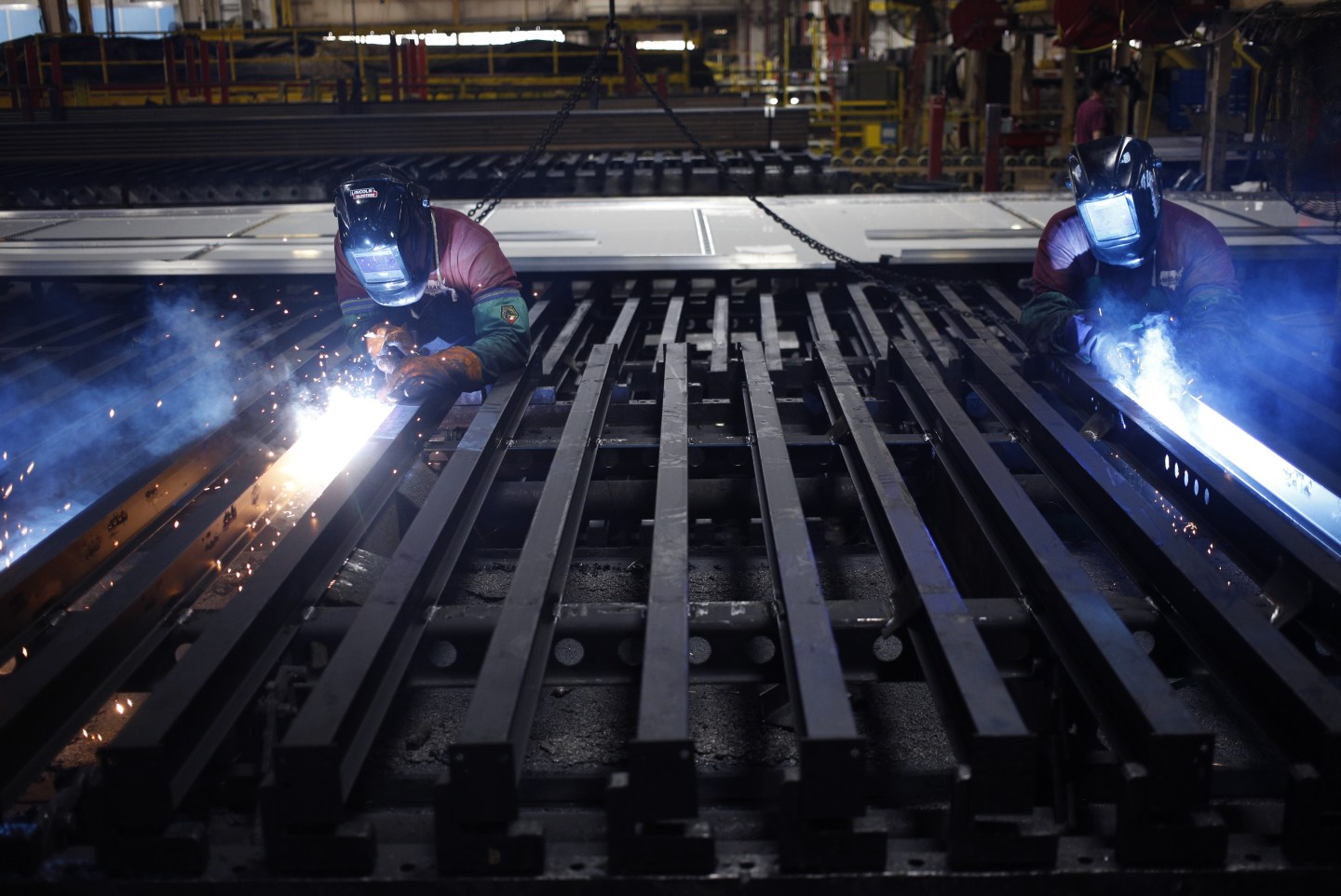 U.S. factory activity contracted in August for the first time since September 2009 as new orders shrank, consistent with an ongoing global manufacturing slump.

The IHS Markit manufacturing Purchasing Managers’ Index slipped to 49.9 from a final July reading of 50.4, according to a preliminary August report Thursday that trailed all estimates in Bloomberg’s survey of economists. Factory employment stagnated on the heels of weaker orders and subdued output.

A reading of 50 is the threshold between expansion and contraction, and the August figure adds to growing evidence that the American industrial sector is losing momentum amid tepid global economies and uncertainty about trade policy. Both domestic demand and orders from abroad shrank this month by the most in a decade.

“August’s survey data provides a clear signal that economic growth has continued to soften in the third quarter,” Tim Moore, an economist at IHS Markit, said in the report.

The yield on the 10-year Treasury note fell and the dollar declined, while stocks pared gains after the figures were released.

The figures come as Federal Reserve Chairman Jerome Powell prepares to offer his assessment of the economy and monetary policy at the central bank’s annual Jackson Hole symposium, beginning Friday.

The data follow other preliminary IHS Markit reports showing factory activity stabilizing in France, while continuing to contract in Japan and Germany. The German manufacturing sector shrank for an eight consecutive month, underscored by a more than 25-point decline in a gauge of output prospects over the last two years.

“The survey’s output data haven’t changed enough to dispel the threat of another slight contraction in GDP in the third quarter, especially given the deterioration in the forward- looking indicators,” Phil Smith, an economist at IHS Markit, said in a statement.

Japan’s manufacturing sector contracted for the fourth month, while in France, the index reversed to show tepid growth.

U.S. business expectations for the year ahead reached the lowest level in data back to July 2012, the IHS Markit data showed.

The weakness in manufacturing is showing signs of spilling over into the broader economy. The IHS Markit gauge of business activity at U.S. service providers fell to 50.9 from 53 in July and matched the lowest since February 2016.

Weaker global demand is causing service firms to cut prices at the same time input costs weaken. A measure of prices charged contracted by the most since records began in October 2009.

Final August data are published on Sept. 3 for U.S. manufacturing and Sept. 5 for services and composite indicators.

—The economy is in code yellow for a recession based on these 9 metrics
—The death of trading: Why more big banks think the business is a losing bet
—Recession watch: 3 ways to reframe your thinking about the next downturn
—What are negative interest rates and why is everybody so worried about them?
—Why WeWork won’t be in the S&P 500 after its IPO
Don’t miss the daily Term Sheet, Fortune’s newsletter on deals and dealmakers.