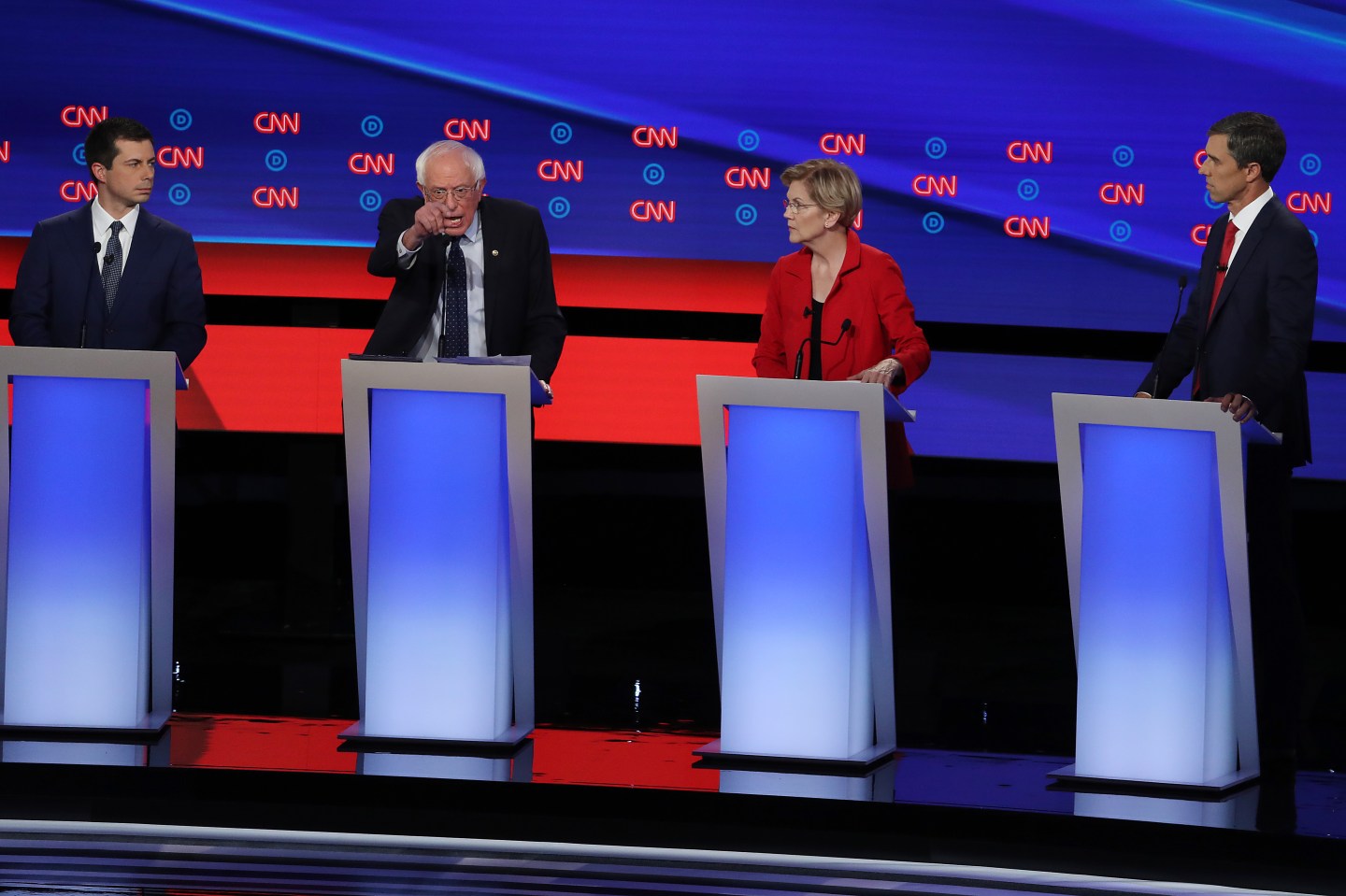 Tuesday night marked a real debate with the gloves off, as 10 Democrats who hope to unseat President Donald Trump scoffed at each other’s plans for providing health insurance for all, vowed to take on the pro-gun lobby in the effort to end gun violence, and accused one another of being unrealistic with their plans to straighten out the country.

At the top of round two, night one of the Democratic presidential debates, U.S. Sen. Elizabeth Warren of Massachusetts marched onstage, the second candidate to do so, joined U.S. Sen. Bernie Sanders of Vermont, patted him on the back and said “Good to see ya.” And it was around that time that the joviality seemed to end in the 2.5-hour match at Detroit’s Fox Theater.

Pundits had predicted that Tuesday night’s conversation would serve as a match between Sanders and Warren, who have been vying in the polls for the second Democratic spot behind front runner Joe Biden, the former vice president. Instead, it was a virtual free for all of everyone else against Sanders and Warren. Notable moments were generated by former U.S. Rep. Beto O’Rourke of Texas, South Bend, Ind., Mayor Pete Buttigieg, former U.S. Rep. John Delaney of Maryland, self-help guru Marianne Williamson and Montana Gov. Steve Bullock, who was on the debate stage for the first time in this race.

“I think the overall winner tonight was obviously the Democratic party because I thought no matter who the individual candidate was, you saw them advocate collectively for something that would be a fresh breath of air from the White House,” Antjuan Seawright, a Democratic strategist based in Columbia, S.C., told Fortune.

“I think Elizabeth Warren demonstrated tonight why she came in tonight as the front runner and why she’s in second place in most polls behind Joe Biden and why she has taken the gas out of Bernie Sanders’ political car,” said Seawright, who watched the debate from New York.

“I thought it was a split decision,” Rebecca Katz, a Democratic strategist based in New York, told Fortune when asked who won.

The candidates seemed to come close to near violence in a sparring episode over health care. Most cited a loved one who’d died, survived or faced serious consequences because of their access to or lack of health insurance.

In advocating for Medicare for All, Sanders said, “We have a dysfunctional health care system. Canada guarantees health care, spends half of what the U.S. spends.”

When Canadians go to the hospital, they are discharged with no bill, Sanders continued. “Health care is a human right, not a privilege, I believe. I will fight for that.”

Sanders argued that a plan to provide Medicare for all would include items like hearing aids and eyeglasses.

Sanders shot back, “I do know! I wrote the damn bill!”

Former U.S. Rep. John Delaney of Maryland argued that the Medicare plan circulating among Democrats in Congress places those with private insurance in a position of having something that is illegal. Delaney, cofounder of a company that provides financing to health providers, said he was the only candidate on the stage who’s actually worked in health care.

“Why do we have to be the party of taking something away from people?” Delaney asked.

The health issue and others were woven through the entire debate, and later in the session, Warren questioned Delaney’s position.

“I don’t understand why anybody goes through the trouble to run for president of the United States just to talk about what we can’t do,” Warren said, generating loud applause.

In another high energy moment, former Colorado Gov. John Hickenlooper mocked Sanders and told him to throw his hands in the air—Sanders’ signature move to express exasperation—and Sanders obliged, sending the audience into laughter.

It was perhaps no surprise to the candidates that the moderators brought up the issue of race, with President Trump’s recent condemnation of Baltimore as being “infested” with rodents and his recent suggestion that three congresswomen of color go back to where they came from.

Williamson, who has offered spiritual support to Oprah Winfrey and other celebrities, emerged from political obscurity at the first round of debates in Miami last month when she suggested “love” is what the country needs.

At Tuesday night’s debate, she drew applause at several points, particularly when she said the tension of race lies underneath the surface of all facets of life in this country, and said reparations amounting to hundreds of trillions of dollars would equalize what black Americans have suffered.

Noting that she once lived in Grosse Pointe, a wealthy suburb that abuts Detroit, she said there is no doubt that race and economics are threaded through issues such as the ongoing water crisis in Flint, Mich.

“It’s bigger than Flint, it’s all over this country,” she said. “This is part of the dark underbelly of American society—the racism, the bigotry and this entire conversation that we’re having tonight.”

Warren said she would address racism systemically, promising to set aside $50 billion for historically black colleges and universities, push for universal tuition-free college and cancel loan debt for 95% of students.

Buttigieg, facing a crisis now in his own community of South Bend with the death of an unarmed black man at the hands of police, said community voices need to help shape local law enforcement policy and use-of-force policies must be revised. A national action plan addressing the relationship between communities of color and law enforcement is needed to, he said.

Moderators brought up the fact that the country experienced three episodes of mass gun violence over the weekend, with one dead and 12 hurt after a shooting at a Brooklyn, N.Y., playground, two children and an adult killed, and 12 more hurt at a food festival in Gilroy, Calif., and one dead and five hurt at a graduation party in Philadelphia.

The near universal cry from each candidate was that the country needs to stand up to the National Rifle Association, the powerful gun-rights advocacy organization. Candidates called for universal background checks, closing a legal loophole that allows people without the necessary credentials to buy firearms at gun shows and blocking straw purchases where people without required credentials buy guns from someone who buys them in bulk.

Buttigieg, who is 37, said he was in high school when two teen shooters killed 12 students and a teacher at Columbine High School in Colorado.

“We know what to do and it has not happened,” Buttigieg said.

Beto O’Rourke said the United States stands out as the country in the world most prone to gun violence.

“No other country comes close to our numbers,” he said.

U.S. Sen. Amy Klobuchar of Minnesota faulted President Trump for “folding” to the NRA on the issue of universal background checks. She said she also wants an assault weapon ban.

—Highlights from the first night of the second Democratic debate

—These are the new rules for tonight’s Democratic debate

—Abortion, reparations, Israel: Topics to watch for during the second Democratic debate