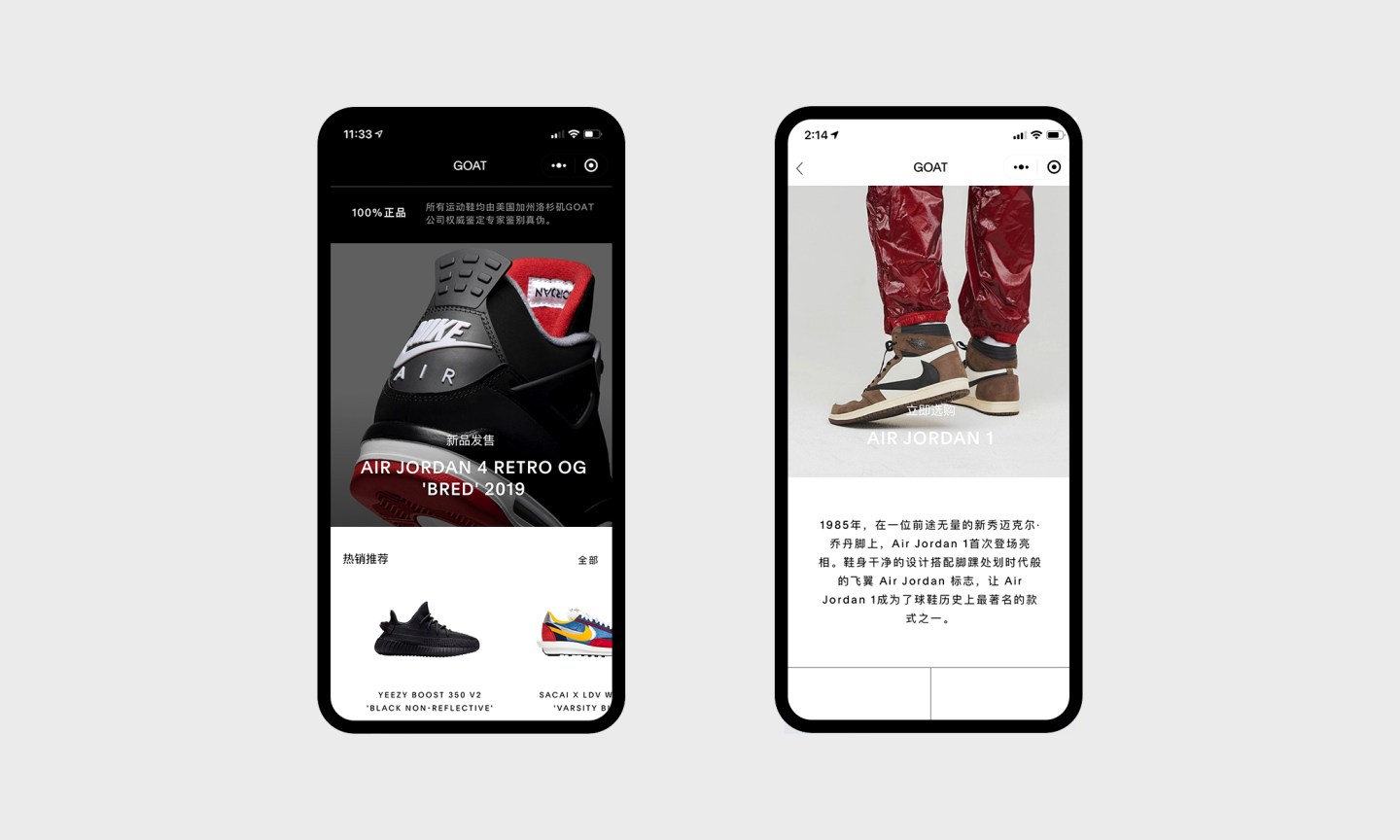 For sneakerheads, the competition is fierce.

Consumer are spending hours (not to mention huge sums) scouring the internet for limited edition pairs of hard to find sneakers like the Nikes inspired by the Netflix hit show, Stranger Things, the recently released Air Jordan 1s reimagined by rap star Travis Scott, or the Arizona Iced Tea-inspired Adidas originally selling for 99 cents that caused a riot last week.

Now online sneaker marketplace GOAT is trying to capitalize on the global demand by launching a new app in China, its attempt to have a bigger footprint in a fast-growing market. The company will have a big launch party in Shanghai Friday featuring several NBA stars, including Houston Rockets star PJ Tucker, a major (some say obsessive) sneakerhead who has paid up to $36,000 for one pair and once wore six different pairs during a single game. GOAT’s China app comes more than five months after the Culver City, California-based company, which stands for “Greatest of All Time,” received a $100 million investment from athletic shoe retailer Foot Locker.

“We’re going to where some of our biggest consumers are to make sure we can best serve them,” GOAT CEO and co-founder Eddy Lu exclusively told Fortune. “Our Chinese customers are really passionate, and in a country where 1.4 billion people live, they really want to stand out.”

With 15 million members, GOAT is among a flourishing class of online sites converting the selling and reselling of sneakers into big business. Chief rivals include StockX, dubbed “the stock market for sneakers,” which recently hired a new chief executive who was formerly at eBay and reached $1 billion in value after its latest funding round. Also in the mix: Stadium Goods, which is teaming up with renown auction house Sotheby’s to sell 100 pairs of limited edition sneakers, including a pair of Nike “Moon Shoes,” that had a presale estimate of $160,000. Last year, luxury designer Versace released its Chain Reaction sneakers, a collaboration with rapper 2 Chainz, through GOAT.

GOAT is going all-in with China, it’s second-biggest customer base after the U.S. Revenue in the athletic footwear market in China is estimated at $9.5 billion this year, according to market research company Statista. But GOAT projects that figure to be much bigger, Lu said, estimating that the Chinese sneaker market will be bigger than the U.S. by 2025.

The projected international sales growth is what attracted three-time NBA champion Andre Iguodala to invest in GOAT. Iguodala, a professed sneakerhead claims to own “somewhere between 300 to 400” pairs. He notes that his former Golden State Warriors teammates Stephen Curry, who has an endorsement deal with Under Armour, and Klay Thompson, who is signed to Chinese sports brand Anta, both make annual trips to China.

“I think it’s going to be great when you look at the sheer market size in China. There’s definitely a culture there and that’s why players tour there in the summer,” said Iguodala, who is endorsed by Nike and has visited the country at least eight times during his 15-year playing career.

Chinese customers have been using GOAT’s original app, but Lu said several customers would complain via social media sites including Weibo and WeChat about shipping issues. Unlike America, parts of China, including Hong Kong and Macau, don’t use zip codes.

GOAT will also be looking to expand beyond its current 10,000 square-foot facilities in Hong Kong to meet its growing customer base. Lu said unlike in America, Chinese sneaker consumers skipped the personal computer generation and went straight to mobile to buy and show off their latest kicks. They’re not shy about it, either, he said.

“It’s all about capturing yourself on Weibo, WeChat, and TikTok,” said Lu about displaying sneakers on those platforms. “They have really embraced this part of the culture where you buy luxury sneakers and let everybody know that you did. It’s very competitive—in a friendly way.”

And, Lu said that the GOAT team has been learning from its Chinese staff about all of the nuances of doing business there. “They’re educating us about the buyers and sellers because it’s a bit different in China,” Lu said. “We’re being very humble going in. We’re like sponges absorbing it all in.”

Lu and his college friend and co-founder/chief product officer Daishin Sugano launched GOAT in late 2015 after a curious Sugano asked Lu if the online sneaker market had an authentication process after he bought a fake pair of the reissued Air Jordan 5 Grapes.

There are 400,000 sellers on GOAT’s app and the marketplace has more than 1 million sneakers listed. While the privately-held company does not disclose financials, several individual sellers on GOAT have reached $10 million in sneaker sales, Lu said.

The company has an extensive authentication process for sellers, who are required to take photos of the sneakers at different angles. GOAT then puts the images in its database to detect fakes.

Besides the US and China, GOAT’s other biggest markets include Canada, Australia, and Japan. While GOAT’s customers are in the key 18- to 34-year-old demographic and are predominately male, the company says it is seeing “exponential growth” with female customers, and that demographic is growing twice as fast than males.

GOAT may be entering China at the right time as online sneaker marketplaces are still in their development phase, said Matt Powell, a senior industry advisor with the NPD, a market research firm. He said that while selling sneakers over the internet has grown from chat rooms to eBay over some 20 years, “There was no authentication element to make sure customers are getting the exact shoes as advertised,” Powell said. “That’s the secret sauce here, you’re being assured you’re getting what’s advertised.”

He said while there’s a demand for rare sneakers with a premium price, “they have to be scarce for those companies to survive.”

At least for now, as anyone searching for a pair of Yeezy Boost 350s, the luxury sneakers created by hip-hop giant Kanye West and Adidas, know, scarcity is a given.