How an Old School Jordanian Sweets Maker Made it to Walmart 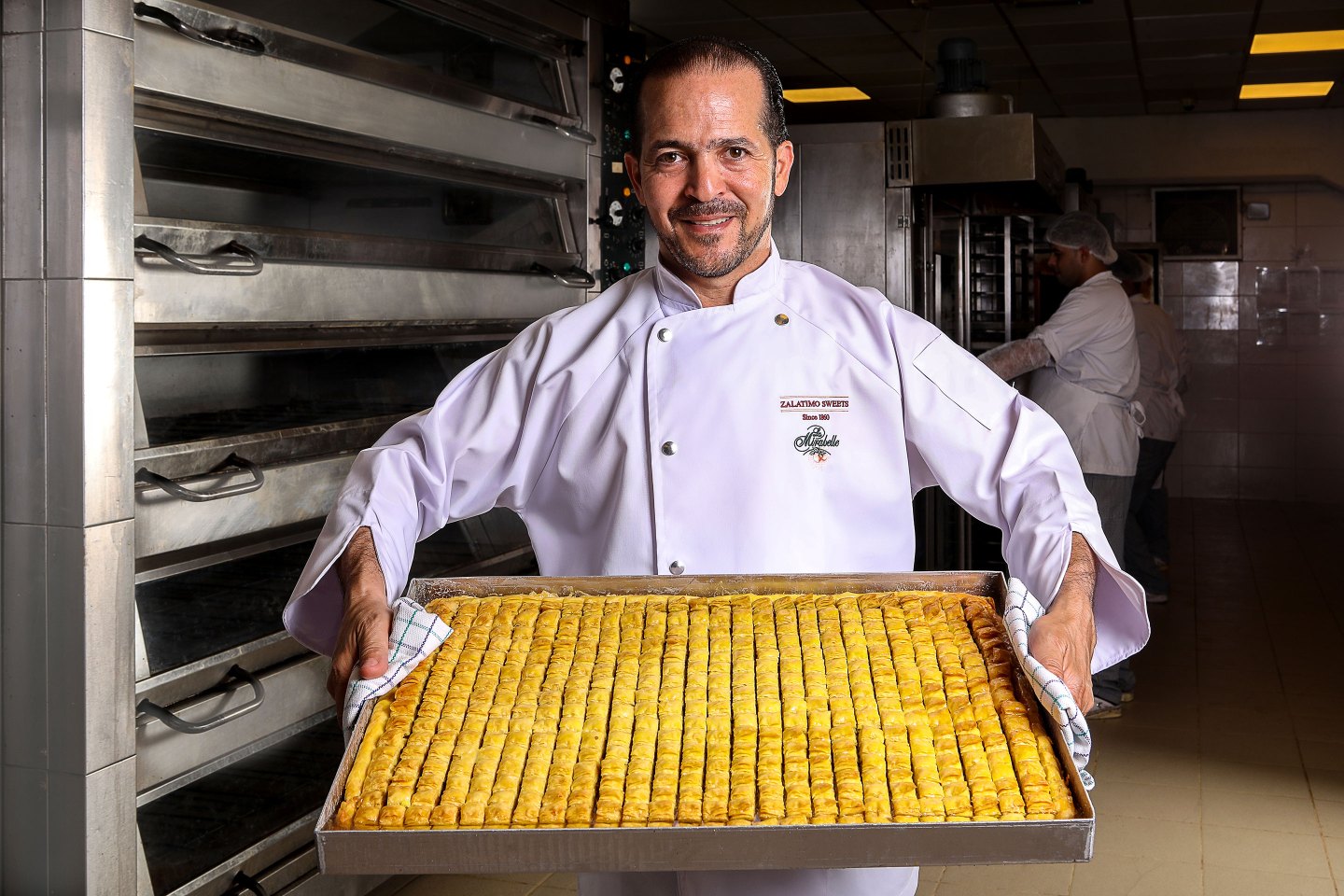 A U.S.-bred entrepreneur is bringing gourmet Middle Eastern sweets from his Amman bakery to Walmart. The secret to his pastries’ price and snob appeal? Would you believe the cost of pistachios, the formerly ho-hum nut that Iranian embargoes have transformed into a delicacy filling foodies can’t live without.

As a 23-year old marketing manager at Prudential Securities in Pittsburgh, Abdallah Zalatimo was dreaming of a hot-shot career building brands on Wall Street when a visit to Jordan for his sister’s wedding in 1985 sent him on a “One Thousand and One Nights”-style metamorphosis into promoting the ancient art of Arabian sweet-making. Zalatimo, a self-described “all-Ameican boy,” grew up in near Scranton, Pa., where his father––who’d been raised in Jerusalem––worked as a physician. Zalatimo’s dad and sister were now living in Jordan, and during the festivities, the Zalatimos held a family meeting to discuss an offer to buy the rights in Jordan to their ancestral business, a brand of artisanal sweets that had a single outpost, a tiny bakery in the old city of Jerusalem run as a one-man-show by Abdullah’s 80-year old grandfather.

Abdallah’s father and uncles, doctors and engineers with zero interest in baking baklava, wanted to sell. But Abdallah hated the idea. “I’d visited the shop in Jerusalem as a child, and it killed me to think we’d be selling our family name,” says Zalatimo. But he also saw an marketing opportunity that intrigued him more than the hawking mutual funds or designing logos for bank branches. Palestinians living in Jerusalem, as well as Bethlehem, Ramallah and other West Bank cities, had relished Zalatimo sweets in past decades, frequently traveling hours to the shop in the old city for the date-rich semolina cookies or a thin, multi-layered pastry filled with cheese that his great-great grandfather created and called mutabbak. But the wars of 1948 and 1967 had driven millions of Palestinians into neighboring Jordan, where they could no longer get their favorite Zalatimo Sweets. “Older people still cherished that taste from the past, and told their kids about Zalatimo,” rhapsodizes Abdullah. “The sense of nostalgia was strong. They longed for Zalatimo to come to Jordan and wind back the tape on their lives.”

Abdallah blocked the sale by convincing his family to let him run the business himself. Weeks later, he’d left Prudential to apprentice layering dough for the family specialty mutabbak (which means folding in Arabic) at the ten-table Jerusalem bakery within the ruins of ancient Jerusalem built by Queen Helena of Rome, in the shadow of the Coptic Monastery. His cantankerous grandfather, the third generation of Zalatimo chefs, demanded that Abdallah master recipes dating back to the brand’s birth in 1860 before handing him the reins. “Every cookie and piece of baklava was cooked by hand, there was no automation,” recalls Abdallah. “My grandfather worked me day and night in the kitchen for three months. He said that unless I became a master chef, my employees would never respect me, that they’d complain ‘Who are you to tell me how to cook?’ He demanded that unless I could bake with his artistry, my cooks could fool me by making mediocre sweets that would ruin the brand.”

A quarter century later, Abdullah has built Zalatimo Sweets into a thriving enterprise with 250 employees, eleven stores in such cities as Amman, Kuwait, Bahrain and Istanbul, not to mention the historic flagship in Jerusalem, and a new foothold in the U.S. market. Its three factories in the Middle East mass-produce its desserts on machines he’s custom-designed to ensure the craftsmanship instilled by his grandfather. This writer distributed boxes of Zalatimo baklava and semolina cookies at Fortune’s offices, and the reviews were boffo. Folks noted that the crunchy baklava––featuring delicate, super-thin layers of phyllo reminiscent of the best Parisian croissants––is a gourmet revelation compared to the soggy, honey-soaked versions found in New York delis.

Last year, Zalatimo generated $11 million in revenues. Though that’s tiny by U.S. standards, Zalatimo Sweets ranks as a mid-sized enterprise in Jordan, and counts among the nation’s most prestigious, and promising, food exporters. Jordan makes $7.8 billion in products sold abroad; around $1.5 billion of that total consists of goods manufactured in industrial zones that offer special free-trade access to the U.S. market, and are dominated by foreign enterprises such as Indian and Chinese clothing manufacturers. For home-grown producers, a major export category is foods and sweets—and Zalatimo’s $3.5 million in foreign sales comprises a significant 2.3% of the $150 million total.

About half of those exports go to the U.S., and the chief wants to multiply that number in the years ahead through his recent entry into big box retailers, notably Walmart, and an Amazon.com internet storefront. Ethnic cuisines sold in stores and online are reaching the mass market as never before. “When I was growing up in the Scranton area in the 1970s, we had to drive two-and-a-half hours to Paterson, New Jersey, to find pita bread,” recalls Zalatimo. Today, the number of U.S. immigrants of Middle Eastern origin and their children has jumped to 4.4 million, up 40% from 2010. To serve this growing demographic, major retailers are expanding the ethnic food aisles offering such Middle Eastern staples as hummus, tahini, falafel and increasingly, gourmet sweets.

Zalatimo Sweets is riding the wave. Until recently, its main venue were mom-and-pop stores selling Middle Eastern specialities in affluent neighborhoods where families from the region are plentiful. San Diego, Orange County, and Chicago are home to large numbers of these stores. (The U.S. ethnic grocery market in the surprisingly large, garnering $40 billion in sales last year, according to research firm IBIS.) In the last few years, Zalatimo has made the jump to big retail. Its sweets are offered in select Jewel Osco stores, mainly in the midwest. Kroger is now selling Zalatimo sweets in five stores as part of a test launch.

Its biggest outlet is now Walmart, where its products sell in 230 of the chain’s 3600 Supercenters that sell groceries. “Walmart ramped up their ethnic category two years ago in select markets,” says Zalatimo. “We’re in the more affluent Middle Eastern neighborhoods. It was important to establish a product choice whose price didn’t decimate demand for our pastries at local ethnic markets that have been selling Zalatimo Sweets for years.”

Amazingly, Zalatimo differentiates its mass-market offering not by downgrading its premium dough or shrinking its pastries, but by making one simple change: Lowering the mix of cookies and baklava in the box that contain its most prized, expensive ingredient: pistachios. When Zalatimo took charge in the mid-1980s, he bought most of it pistachios from Iran, traditionally the world’s largest producer, and still tied for first place with the U.S.––whose California farmers make the nuts for salty snacks, not gourmet desserts. But the longstanding embargoes on Iranian exports has forced Zalatimo to buy its supplies from the two other growers of artisanal pistachios, Syria and Turkey.

Because those two nations can’t fill the void left by Iran, prices have soared. “When I started in the business, pistachios cost $3000 per metric ton. Now, the market price is $35,000,” says Zalatimo. By contrast, the four other categories of nuts that that fill Zalatimo pastries, walnuts, cashews, hazelnuts and almonds, cost around $7000 a ton, and the fourth filling, dates, fetches only $4000. The more pistachio rich its deserts, the more upscale the brand. And keeping that cachet is costly: Pistachios account for 22% of Zalatimo Sweets’ annual expenditures, equal to its outlays for labor.

The evolution of this rare nut into a high-priced ingredient has transformed pistachio-heavy pastries into special delicacies that command premium prices. “Before the embargo, a lot of people preferred walnuts because they’re aromatic and pair beautifully with cinnamon,” says Zalatimo. “No one thought of pistachios as special. Now, they’re the Beluga caviar of nuts.”

Here’s the pistachio-driven difference between the super-deluxe offering sold in gourmet stores and duty free shops (and also available online), and the mass-market versions at Kroger and giant French chain Carrefour in the Middle East, and of now Walmart. Let’s start with baklava. In the gold embossed, deluxe package, Zalatimo offers three types of the dessert, featuring both lighter phyllo and denser, richer “burma string” dough, but all three filled with pricey pistachios. That one kilo package costs around $39 in grocery stores and on the Amazon storefront. The slightly smaller, mass market product in square red tin provides an assortment that’s one-third pistachio filled, and two-thirds walnuts and hazelnuts. It sells for around $24.

As for cookies, they’re all made with flaky semolina dough. But the premium one kilo box offers a mix of 40% of the pieces filled with the royal nut, and 30% each stuffed with walnuts and dates. A slightly smaller tin typically retails for $35, versus $22 for the value version that’s a mix of 50% dates, and 25% each walnuts and pistachios.

Zalatimo says he learned a key lesson on leadership from matrimony. “In 1992, we were just recovering from a collapse in business because of the war in Kuwait,” he says. “I was working from 7 am to 11 pm, I was the bookkeeper, the driver, the purchaser. I met my wife through her father, who was my banker, because I went to the branch all the time, not to bars or to play tennis. My future wife’s picture was on his desk, I liked her, and he sort of winked at me and told me she worked in another branch.”

When they got engaged, Zalatimo told his fiancee and father-in-law that it was “high season,” and that he’d have to delay his honeymoon for months or the company could flounder without him. “Then my father-in-law stepped in,” he says. “He told me, ‘Any business relying on one person is a failure.'” Zalatimo recognized wisdom when he heard it, and after the ceremony, jetted off to Florida for three weeks of fun in the sun. He also began building the bedrock staff that he hopes will help lift the family brand he built from an ancient kitchen in Jerusalem to the pistachio-stuffed delights now available around the world.