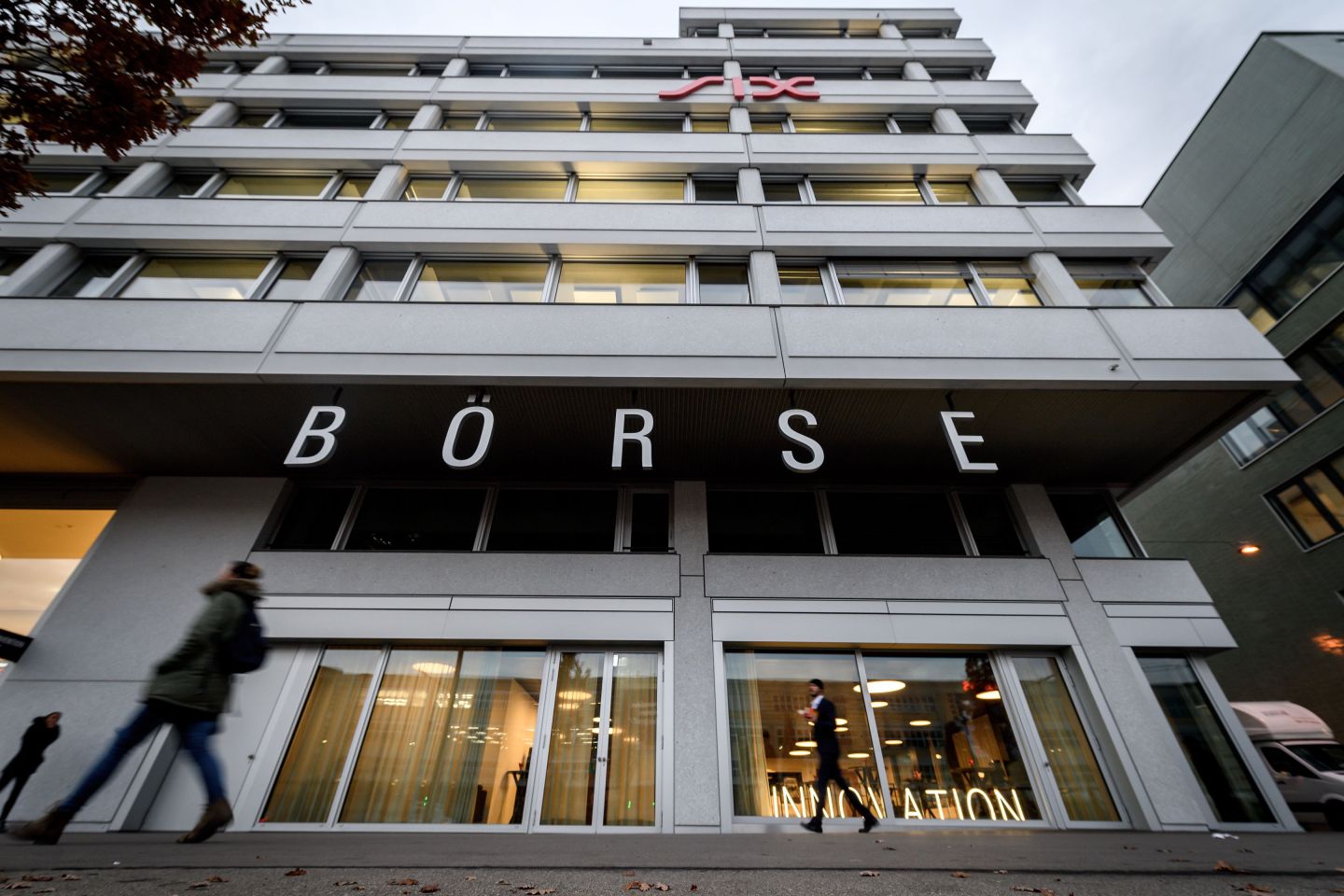 People walk in front of the headquarters of the Swiss Stock Exchange (Boerse) operated by the SIX group in Zurich on November 29, 2018. (Photo credit FABRICE COFFRINI/AFP/Getty Images)

As the end of October draws closer, the two candidates to succeed Theresa May as British prime minister are adamant that the U.K. must leave the EU at that point even if there is no agreement in place between the two sides—despite the risks to business that a no-deal Brexit would bring.

So, if there is a no-deal Brexit come October 31, what happens to British stocks and exchanges? Switzerland, it turns out, may be providing a demonstration.

Switzerland is surrounded by the EU, but it isn’t part of it, nor is the famously neutral country a member of the European Economic Area. Like the U.K. in recent years, the Swiss government has for a long while been trying to negotiate new terms for its relationship with the EU, and struggling to get its lawmakers to green-light the result. And as with the U.K. and the EU, the process hit a brick wall.

The EU decided at the end of 2017 to play hardball by tying the issue of Swiss access to EU financial markets to the wider negotiations—it only granted Swiss stock exchanges a rolling, temporary “equivalence” status to allow them to trade EU stocks. And now, as those wider talks have failed, the EU has let that permission expire.

In retaliation, the Swiss government has banned EU exchanges from dealing in the shares of Swiss firms such as Nestlé, UBS, Novartis and the Swatch Group—traders face fines and up to three years in jail for violations.

The shift clicked into place Monday, the day after the expiration of Switzerland’s “equivalence” status.

It’s been a keenly-watched event, precisely because of the echoes of the U.K.-EU standoff. “It will be interesting to see what happens and see if all the systematic fixes work and go smoothly because that will be the case for the U.K. going forward,” a trader told Reuters, referring to traders’ last-minute scramble to prepare for the tit-for-tat trading limits. Makor strategist Stephane Barbier de la Serre described the situation as “a proxy of what Brussels could inflict on London.”

However, there does not seem to have been a dramatic impact, at least not at this early stage.

Trading at the SIX stock exchange in Zurich was “unremarkable,” a spokesperson for the exchange told Reuters. This is most likely because many large institutional investors already have access to SIX. Smaller asset managers without such access will have had to use brokers to deal in Swiss shares, adding extra costs to their trades.

Some trades in Swiss stocks (around a third of which were typically traded in the EU previously) were diverted from exchanges such as Frankfurt to the U.S., or conducted off-exchange, thus circumventing the Swiss ban—though again entailing higher transaction costs.

Equivalence as a weapon

So what’s the lesson for the U.K. here, if there is any?

“At the moment, the only parallel we can draw for the U.K. post-Brexit, in line with what’s happened in Switzerland, is that there’s a good chance that ‘equivalence’ will not be granted for the U.K., in which case the way the Europeans trade, and where they trade, will be up for question,” said Scott Evans, a researcher at London Business School.

There are certainly good reasons for the U.K. being granted “equivalence” status, not least the fact that the country has been part of the EU for decades. That means British regulators helped draft the EU’s financial rules, and British laws are currently entirely aligned with those rules.

However, the Swiss situation demonstrates how “equivalence” status can be used as a strategic weapon—and there are certainly plenty of EU exchanges that would like to take a bite out of London’s.

What’s more, if the U.K. does leave the EU on October 31 without a transitional deal, that really does mean a clean break with no automatic equivalence arrangement, as European regulators have made clear.

“Longer term, [a similar tit-for-tat confrontation between the U.K. and EU] could have quite a detrimental impact or could end up pushing more trade towards London,” said Evans. “It’s a pretty tough one to call.”