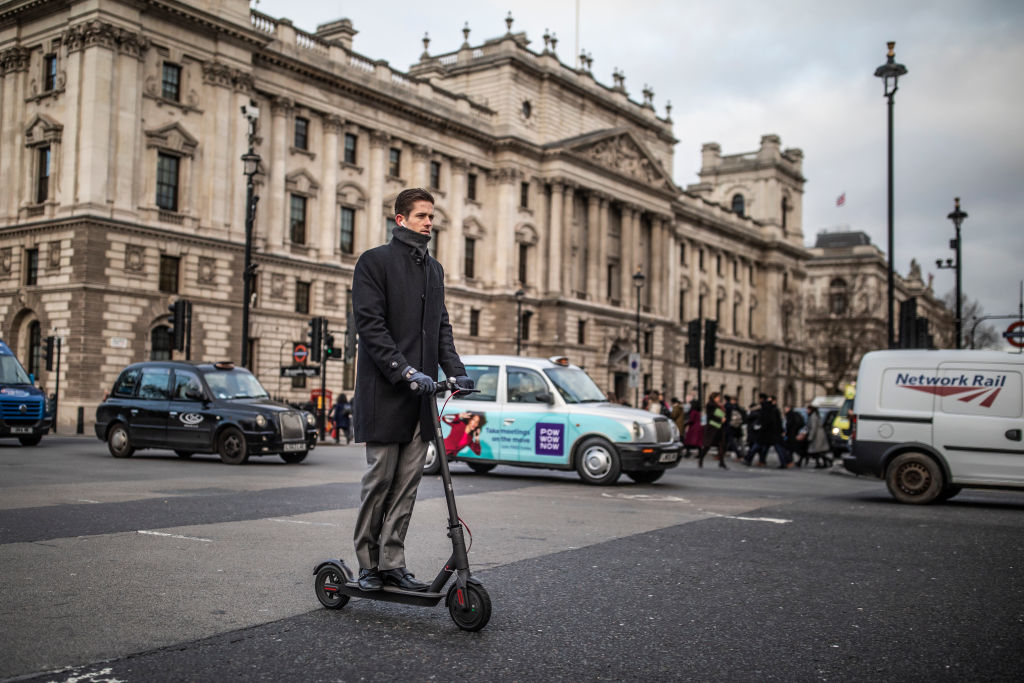 LONDON, ENGLAND - JANUARY 9: A man passes past Parliament Square on an electric scooter on January 9, 2019 in London, England. In the UK, electric scooters and similar powered transporters are still classified as 'motor vehicles,' subject to the same regulations. This makes them illegal to operate in pedestrian areas and bicycle lanes, and imposes strict licensing requirements on potential road use. Despite the current prohibitive regulations, many commuters have turned towards scooters as an alternative mode of travel. (Photo by Dan Kitwood/Getty Images)
Photo by Dan Kitwood—Getty Images

When Emily Hartridge, a British YouTube star, died in a traffic accident in south London on Friday, it wasn’t just her high profile that drew attention—it was what she had been riding: an e-scooter.

The 35-year-old TV presenter and mental health advocate, who built a career off her YouTube series “10 Reasons Why,” was reportedly hit by a truck while riding the e-scooter in a roundabout in the neighborhood of Battersea. Her death was announced on her Instagram account.

It’s become a grim but familiar story: in Europe, e-scooters first appeared roughly a year ago, and since then, fatal accidents have been reported in Barcelona, Paris, and Sweden.

But the incidents in London on Friday had another twist. Far from being a city overrun with the rentable, free-floating e-scooters that have become ubiquitous in other European cities over the past year, e-scooters are relatively rare in London.

In fact, under U.K. law they’re largely illegal. That policy is now under review, but the recent accidents show London is facing some of the risks of the e-scooter boom—before its own has even begun.

For the exploding European e-scooter market, London is a large and potentially lucrative holdout.

The two biggest e-scooter companies, U.S.-based Lime and Bird, have both arrived in force in Europe in the last year, and both have plans to expand. Bird is currently in 14 cities in nine countries, and the company has said it would add 50 European cities to its footprint this summer, though it did not specify which cities it would target.

Lime, which operates in an estimated 39 cities in 18 countries, also confirmed it is expanding in Europe this summer, though it did not say by how many cities. In early July, the company launched its service in Oslo, Norway and Helsinki, Finland, and it has also recently entered the German hubs of Berlin, Cologne, and Hamburg.

Those companies are not alone, either: in Paris, one of the most crowded e-scooter markets in Europe, up to a dozen different companies offer rentable e-scooters, including Uber’s Jump service, the Netherland’s Dott, Germany’s Wind, and Sweden’s Voi. Europe’s other major holdout recently gave e-scooters the green light. After a debate in Parliament, Germany approved a bill in May to allow e-scooters.

But in the U.K., e-scooters are classified under laws for motor vehicles, subjecting them to the same standards for license plates as cars, for instance, and barring them from sidewalks. In effect, they are largely illegal. If caught on an e-scooter on public roads, a rider can be fined £300 ($375) and have points docked on his driver’s license.

That policy could soon change. In March, the U.K. transport ministry announced a wide-ranging review of the country’s mobility policy, which includes whether to legalize e-scooters. It’s a move the operators are reportedly pushing for: Lime told Fortune it regularly engages with both local and national government in the U.K. over e-scooters, and said it looked forward to supporting the review. Bird did not reply to Fortune‘s request for comment on its lobbying efforts in the U.K. The Department for Transport declined to comment on the status of the review.

Following Friday’s deadly accident, the Department for Transport issued a statement reminding e-scooter brands—and their riders—that its policy has yet to change.

“Safety is at the heart of all our road laws and it is important that retailers continue to remind people at the point of sale that it is illegal to ride e-scooters on public roads and pavements,” it said. Neither Bird or Lime responded to a request for further comment. Amazon on Monday said it would tell e-scooter sellers on its platform to make clear in their listings that they are not legal on public roads. Other U.K. retailers already carry warnings for e-scooter sales.

But the U.K.’s opposition party, Labour, said the government still needs to provide more guidance on when and how they can be used.

“With e-scooters becoming increasingly common on our streets and roads, there’s a pressing need for the government to provide clarity and guidance on their use,” said Andy McDonald, the Labour party’s shadow transport secretary. “At present, e-scooters exist in a sort of transport grey area, where they’re not officially allowed on either roads or [sidewalks] but their use is tolerated.”

London’s current e-scooter restrictions do give it one advantage: a chance to watch and learn how other urban centers have embraced rentable e-scooters—and managed the backlash.

Nowhere is the tension between the exploding popularity of e-scooters and the challenges of regulating them more obvious than in Paris.

In June, Mayor Anne Hidalgo initiated a crackdown, placing an immediate cap on the fleet, banning e-scooters from sidewalks, and restricting their speeds to a max of about 20 kilometres an hour (12 miles per hour). “For a year, the services of electric scooters have multiplied in Paris, in an anarchic way, in the absence of a clear legal framework,” the city said in a release.

By then, the number of e-scooters—trottinettes, in French—had risen to 20,000, the city said, with the fleet made up of vehicles from roughly a dozen operators, according to a study from mobility consultancy 6-t.

Unused scooters were clogging sidewalks in front of iconic locations like the Louvre and the Eiffel Tower. A pianist from a world-famous opera was knocked over by an e-scooter, hurting her hands and preventing her from playing. Shortly after the regulations were announced, a 25-year-old man was riding an e-scooter when he was hit by a truck and killed.

Both Lime and Bird say they’re committed to safety and to working with local governments. In Paris, Lime is running weekend training courses on how to ride the e-scooters, with free helmets. Last week, Bird announced a 100-city tour to promote safety on its scooters, although it did not specify which cities would be included.

The end of the ‘Wild West?’

As fast as e-scooter companies arrived in Paris, they have had to adapt to the new rules. Many of the smaller companies that offered rentable scooters in the city seem to have disappeared since Paris introduced the new rules—the Financial Times estimated up to half have either scaled back or stopped operations completely, some in favor of the new scooter hot spot: Berlin.

Others have stayed, or even doubled down: Bird said in a release that it would make Paris its largest European hub, and would hire 1,000 people over the next two years, just weeks after announcing it would designate parking spaces for the scooters—instead of adhering to the free-floating model—in order to address the city’s concerns.

That middle ground—of working with city governments, and leaving behind the ‘Wild West’ approach—is likely to be crucial for the long term success of e-scooter operators, says Kersten Heineke, who leads the McKinsey Centre for Future Mobility in Frankfurt.

Done properly, e-scooters offer another option for low-carbon transit in cities with good infrastructure, helping decongest roads and public transportation. They are also not particularly unsafe compared to other options, he adds.

It remains to be seen if London will buy that last argument.

“Any death or serious injury on London’s roads is one too many, which is why we are asking the government to ensure that safety is their top priority in developing any new legislation for e-scooters on U.K. roads,” said Stuart Reid, Transport for London’s director of Vision Zero, the city’s program for reducing traffic fatalities. The city is already pushing hard to reduce cycling deaths. Last year, 12 people died in cycling accidents, compared to 23 in New York.

Whether and how e-scooters become legal in London is a decision for the U.K. government, TfL adds. The Transport Department did not comment on how long its review of e-scooters would take—but it feels as though the agency is already playing catch-up. As Alia Verloes, a project manager at 6-t, put it: “most of the time with new mobility, the [product] goes faster than the regulator.”