If the Economy’s So Good, Why Is GDP So Low? 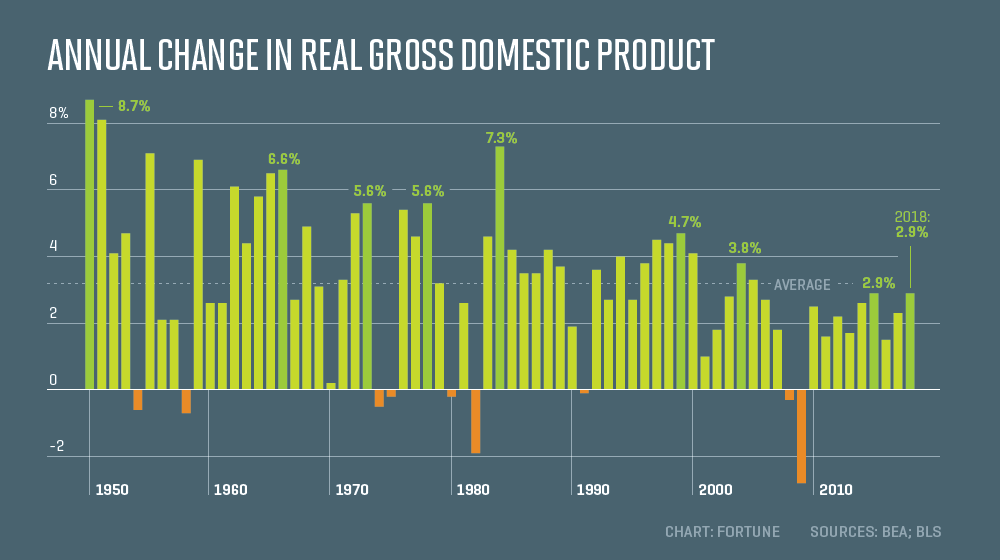 With an economy as complex as the United States, it’s never one thing, but here are a few elements contributing to tamer numbers on the GDP front.

“As we’ve matured as an economy, we consume 65% services,” says Marc Chandler, Chief Market Strategist with Bannockburn Global Forex. “Compare that to China, which has consumed more cement in the last 20 years than the U.S. has for the last 200 years.” That follows a pattern where economies will spend money on fixed capital first, which is a strong stimulus for growth. That includes roads, highways—and houses. “Let’s say you’re starting a family. First, you buy a house, then you buy furniture and TV’s. After that, you buy services.” And that brings us up to today: a largely service economy.

“Technology is changing everything,” Chandler says. “GM can now make a car in less than 20 man hours. A guy on the assembly line today is making multiple cars in a fraction of the time his grandfather did. And his hands are touching a computer screen, not touching parts of a car.”

He points out that new technology—think the internet and high-tech—saves capital and labor. “So while in the past you might have bought a computer to take the place of a typewriter (which took the place a pen or pencil) now, instead of buying a new computer you can buy new apps.” You get more computing power, but you don’t have to spend as much money.

Liz Ann Sonders, Chief Market Strategist for Charles Schwab and Co., also blames high levels of debt following the Great Recession. “Not only is this cycle a post-debt bubble cycle—it usually takes a good decade to work out of these—but more broadly, debt levels, especially federal government and business, are in the stratosphere. As debt moves higher and higher, economic growth tends to move lower.”

Part of the reason for that is the “crowding out” effect as individuals, companies and the government make payments on the debt. “The higher debt crowds out investment in capital goods,” she says, “reducing economic output relative to what it would be otherwise.” And as many households have spent the past ten years paying down their debt following the financial crisis, “that means spending, which contributes to GDP, lessens.”

Changes in the labor force

Doug Duncan, Senior Vice President and Chief Economist at Fannie Mae observes that the post-World War II economic expansion was powered by the the movement of ‘Baby Boomers’ into the workforce, as well as household formation. That included the rise of women into the workforce, which peaked around the year 2000. More women entering the labor force created more wage earners, as well as more consumers, and played a role in increasing real GDP. But now, with Boomers turning 65-years-old at the rate of 10,000 each day—male and female—their departure from the workforce is not being fully replaced.

Additionally, “immigration has been slowed,” says Duncan, “thus slowing the growth of the workforce as well.” That’s part of the reason why there can be a million and-a-half more job openings (7.4 million according to the BLS Job Openings), significantly more than the number of people who could fill them (there are 5.9 million unemployed people according to Employment Situation).

Duncan also believes government regulation has put a damper on business investment in recent years, that is until the Trump Administration dramatically slowed regulatory issuance and cut taxes. “That generated the largest ever recorded increase of optimism of small business,” he says, “but the administration also increased spending, adding to an already very high level of debt to GDP. Add to that the uncertainty faced by business investment plans when tariff discussions, which change daily,” and you have a recipe for slowing growth.

Whatever the reasons for the slower GDP rates of recent years, not even the Trump Administration predicts GDP on an annual basis as high as 4% in the coming years. And there are some who would argue that higher real GDP rates would increase the risk of a boom and bust cycle anyway. So as the Fed weighs the benefits of lowering interest rates to stimulate growth at the first signs of economic weakening—which may come as soon as the next Fed meeting (July 30th and 31st)—the prospect of blockbuster numbers may remain a fond memory from our country’s younger days.