Zion Williamson and Other Top NBA Draft Picks Are About to Cash In. Here’s How Much They Could Make 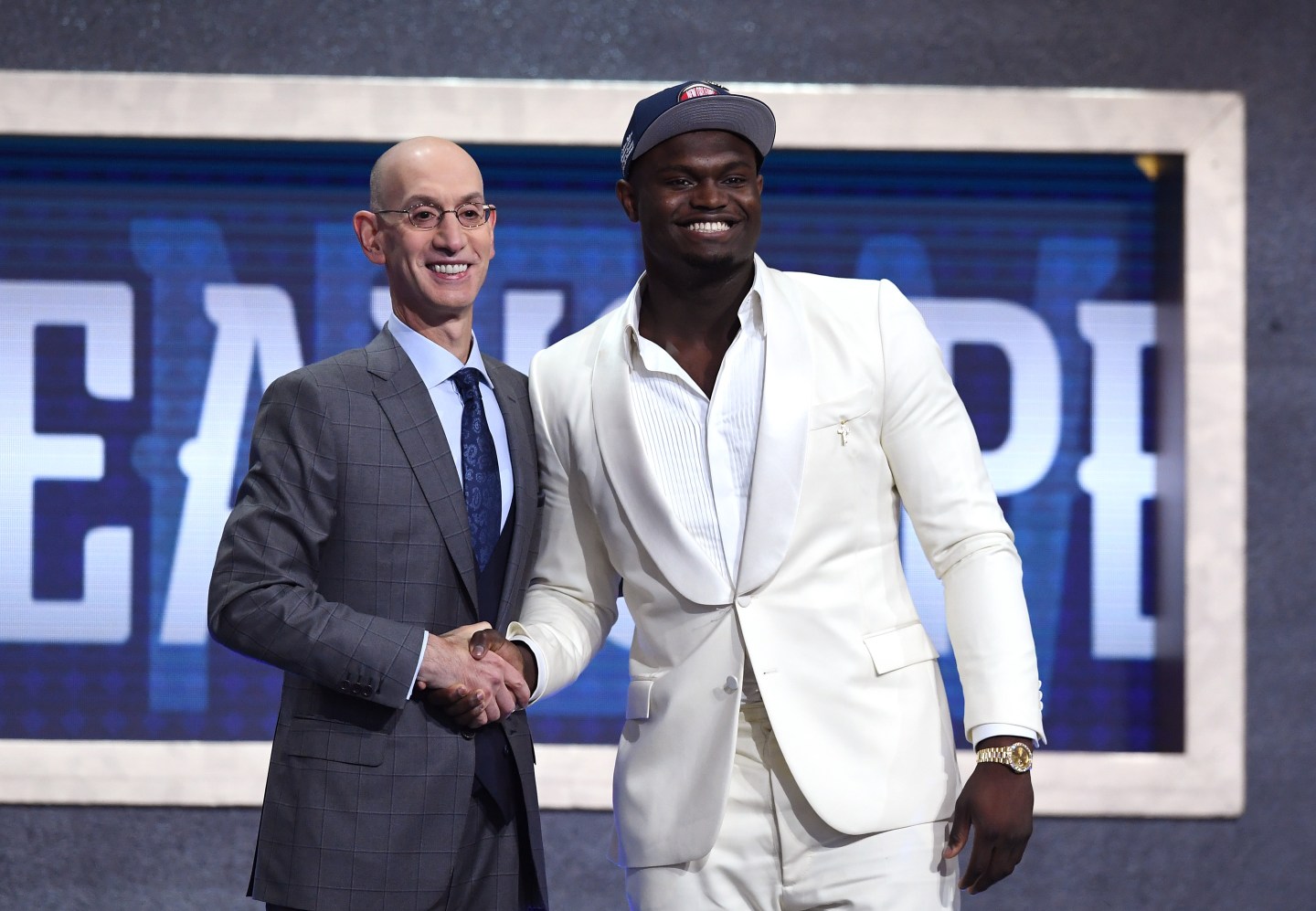 NEW YORK, NEW YORK - JUNE 20: Zion Williamson poses with NBA Commissioner Adam Silver after being drafted with the first overall pick by the New Orleans Pelicans during the 2019 NBA Draft at the Barclays Center on June 20, 2019 in the Brooklyn borough of New York City. NOTE TO USER: User expressly acknowledges and agrees that, by downloading and or using this photograph, User is consenting to the terms and conditions of the Getty Images License Agreement. (Photo by Sarah Stier/Getty Images)
Sarah Stier Getty Images

Resplendent in a sparkling off-white tuxedo, Zion Williamson took his place onstage in New York as not only the top pick in the 2019 NBA draft Thursday night but also as the new face of the New Orleans Pelicans.

As the number one pick, Williamson is projected to make up to $44.2 million with a four-year contract, per the NBA’s rookie salary scale. The first two years of his contract are guaranteed at an estimated $20 million, with the team holding the options for the last two years of the deal, which are usually picked up.

Besides Williamson, two other top draft picks, Murray State’s Ja Morant, drafted by the Memphis Grizzlies, and RJ Barrett, Williamson’s college teammate at Duke, selected by the New York Knicks, will cash in as well. Morant and Barrett are expected to as much as $40 million and $36 million over the four years, respectively.

The contract values are based on the rookie salary scale where teams can pay as little as 80% of the scale, but typically pay 120%, which is the maximum allowed, according to Nate Duncan, NBA podcaster and noted salary cap expert. The potential salaries are based on teams offering deals worth the maximum 20% above the rookie scale, Duncan said.

How did we get here? Williamson, the consensus college basketball player of the year at Duke, became the top choice after the Pelicans won the vaunted NBA draft lottery in April. Williamson’s selection ushers a new era in New Orleans as the Pelicans last week traded away its best player, the disgruntled All-Star Anthony Davis to the Los Angeles Lakers where he will be paired with NBA great, LeBron James.

These moves all come as the Toronto Raptors took a potential one-year risk by trading for Kawhi Leonard, who helped them win this year’s NBA championship by beating the defending champ Golden State Warriors. But now Leonard joins more than a dozen star NBA players who will be seeking millions when free agency begins next month.

“What happens this summer is one of the most seismic periods since 2010 (when James joined the Miami Heat) as there are so many free agents and teams who can take a step forward or back,” Duncan said. “One key player can change the dynamic of a franchise.”

Moments after his name was called by NBA commissioner Adam Silver during Thursday’s draft, Williamson, with his mother by his side, couldn’t hold back his emotions.

“I’ve been dreaming about this since I was 4-(years-old) and for it to actually happen, I just thank God for it,” said Williamson, tears streaming down his face.

When asked what would like to say to his new fanbase in New Orleans, Williamson simply said, “let’s dance!”

He later told reporters that there was always a slight chance he wouldn’t be the number one pick.

“But I guess you don’t know until you actually go through it,” Willamson said. “Hearing my name called and I was able to make it on stage without a tear, shake the commissioner’s hand, but in the interview with my mom standing beside me, my emotions just took over.”

Meanwhile, Williamson also stands to make more “bags”—slang for money, off the court as well in terms of his endorsement deals. In April, longtime sneaker industry executive Sonny Vaccaro thought Williamson could receive as much as a $100 million sneaker deal, an unprecedented amount that would exceed the $87 million shoe deal LeBron James got in his rookie deal with Nike in 2003. It’s sure to bet that Nike, Adidas, New Balance, and Puma are courting Williamson.

“If Zion doesn’t change, I predict that he will be the first basketball athlete at 18 years old that the world is rooting for to become a billionaire. I say, billionaire, very easily,” Vaccaro told ESPN. “He is going to have an opportunity to be the face of every company and every major corporation. He is the most marketable person I’ve seen, for a lot of different reasons.”

Vaccaro’s words carry some weight; In 1984, while an executive at Nike, he was instrumental in signing Michael Jordan. Let’s just the rest is history as Air Jordans became (and still is) the most popular basketball shoe brand in the world.

One expert recently speculated that a Chinese sneaker brand like Anta, which counts Warriors All-Star sharpshooter Klay Thompson as a major endorser, may be the lucky winner in the Williamson shoe sweepstakes. Last year, Anta brought Amer Sports, a sporting goods company whose brands include Wilson, Atomic, and Salomon for a reported $5.2 billion.

“Over the last decade, western brands have taken a share in China. Chinese brands are now committed to taking it back,” said Matt Powell, a senior industry advisor with the NPD Group, a market research group. “Zion could get the largest rookie shoe contract ever in the U.S.”

Other Chinese sneaker brands, including Li-Ning and Peak, are also “in play,” Powell added.

In February, Williamson’s footwear became a hashtag on social media, #zionshoe, after he injured his knee when he slipped and split one of his shoes, a pair of Nikes endorsed by NBA All-Star Paul George, during a Duke loss to North Carolina. Williamson ended up missing several games, and Nike modified his shoes in time for the NCAA tournament.

Pelicans fans hope next season Williamson can replicate the 22.6 points, 8.9 rebounds and 2.1 assists per game on 68 percent shooting he averaged during his lone campaign at Duke.

However, Pelicans general manager David Griffin, who helped the previously mentioned James win an NBA championship as an executive with the Cleveland Cavaliers in 2016, told reporters in New Orleans on Thursday that he’s in no rush for the 18-year-old Williamson to lead the Pelicans.

As Williamson is now the Pelicans most popular player, Griffin said the team’s leadership role will be assumed by veteran guard Jrue Holiday and others while Williamson will be in a learning mode like most rookies.

“At some point, if there is a time that the baton gets passed in terms of who is expected to carry us to win games, it will. That is not now,” Griffin said. “Let Zion be that kid. Don’t write this like he is here to save this franchise. He is not.”

—Slack is going public without an IPO. Here’s how a direct offering works