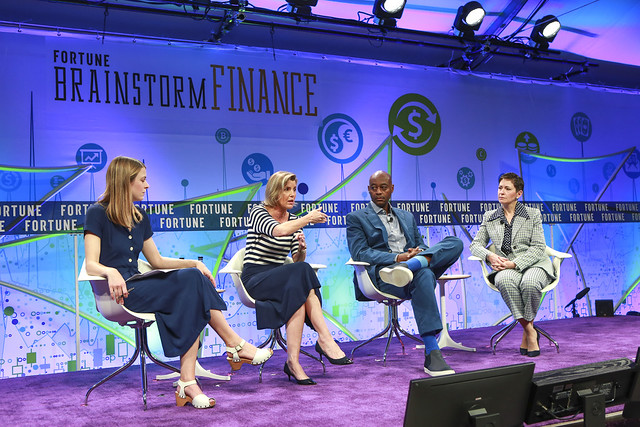 “Guys, we’ve been doing that for years and years and years. If it was gonna work, it would’ve worked,” she said of the common corporate salves to a pressing diversity crisis.

Instead, CEOs need to decide they’re going to “break the wheel,” the CEO of Ellevest, a digital financial advisor for women, said at Fortune‘s Brainstorm Finance conference on Thursday. By that, she meant they must take dramatic, seismic action to address the problem. Business as usual isn’t gonna cut it, she said. “We’re so far behind the starting line; it hurts us all.”

The data underlying Krawcheck’s comments explain her sense of urgency—and frustration. Among the top firms in financial services and technology—the focus of the Brainstorm summit—women made up 18% and 14% of executive committees, respectively, last year. Those figure were only slightly better than 2014’s: 13% and 11%, according to management consultancy 20-first.

Krawcheck shared the Brainstorm stage with two leaders whose companies are attempting to follow her “break the wheel” advice.

Citigroup earlier this year disclosed that, on the whole, women at the firm globally earn 29% less than men. The revelation was an instance of voluntary, radical transparency as the bank was not required to publish the figure (though it did face shareholder pressure to do so).

“It was an inflection point for us,” said Raymond McGuire, who’s vice chairman of Citigroup and chairman of banking, capital markets, and advisory at Citi. The disclosure and the bank’s efforts to close the gap reflect its culture and values, he said. To get from good to great, he said, “you have to figure out how good you are.”

Edward Jones, meanwhile, recently introduced a program that incentivizes retiring financial advisors to refer their business to another advisor who’s a woman or person of color.

“The reason for this was to raise awareness,” said Edward Jones Managing Partner Penny Pennington, noting that 20% of the firm’s advisors are female. The firm is trying to “create an environment” that reflects the communities the firm serves and is empathetic to a broad group of people. Though Pennington admits there are “as many women who don’t like the idea as there are women who do like the idea.” Female critics of the initiative, she said, don’t want others to assume their practice is only growing because of some kind of special treatment.

Assertive, top-down leadership on diversity is—by its very nature—unlikely to please everyone. But that’s what’s needed, in Krawcheck’s view.

She says you can’t expect significant change—like the kind that will upend the social norm that only white men are leaders—to always bubble up from the bottom. “It really has to come from the top,” she said, “as in, ‘We’re just gonna freakin’ do this, and I don’t care if even some of the women don’t like it.'”

—Brainstorm Finance 2019: Watch the livestream of the inaugural conference

—Andreessen Horowitz: How Facebook’s Libra cryptocurrency will be governed