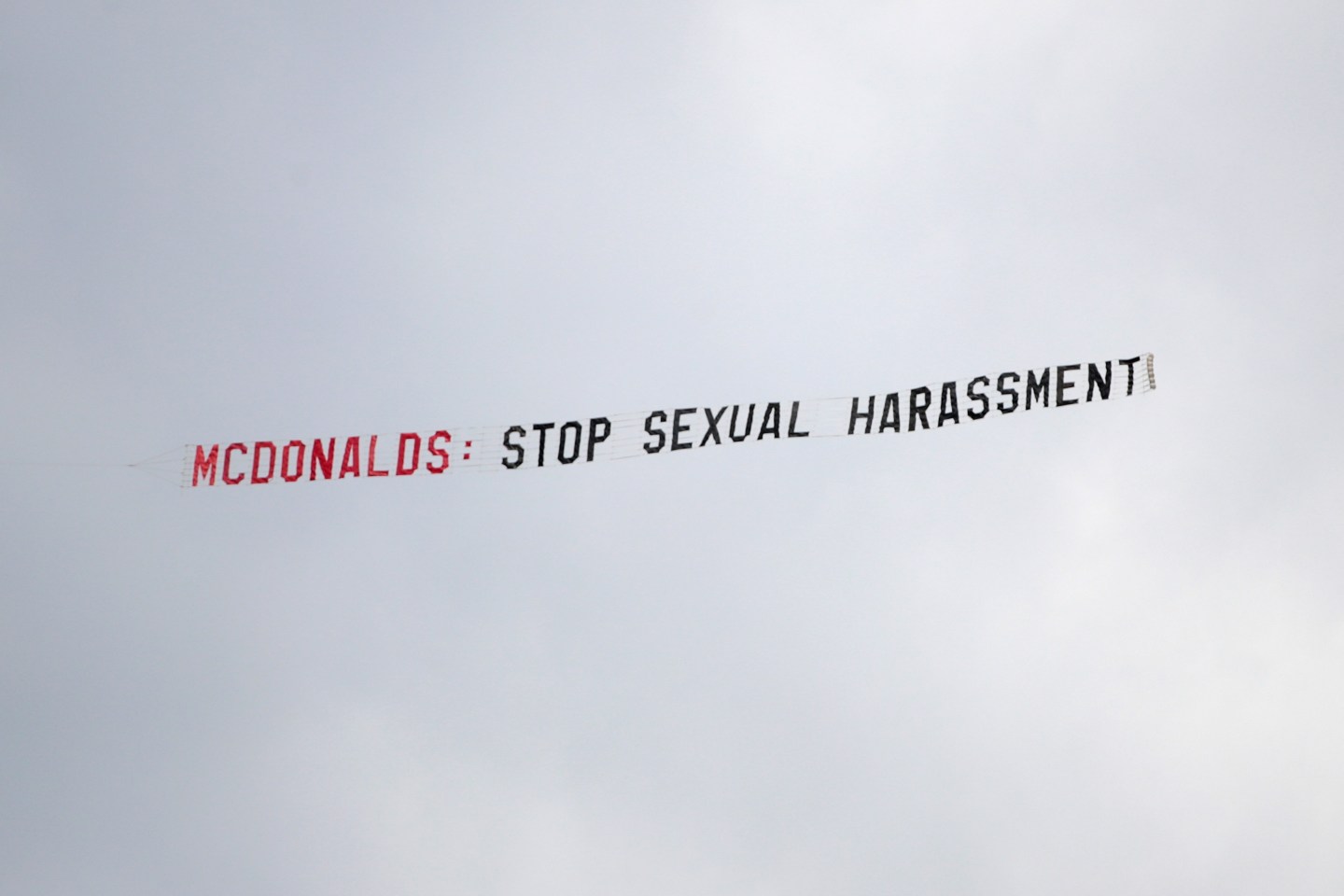 CHICAGO, IL - SEPTEMBER 18: A plane carries a banner past the corporates headquarters of McDonald's as workers, joined by other activists, protest sexual harassment at the fast-food chain's restaurants outside of the building on September 18, 2018 in Chicago, Illinois. Similar actions which took place around the country and were touted as the first-ever nationwide "strike" against sexual harassment in the fast food industry. According to a recent study forty percent of female fast-food workers experience unwanted sexual behavior on the job. (Photo by Scott Olson/Getty Images)
Scott Olson—Getty Images

U.S. senators including a quartet of Democratic presidential candidates are calling out McDonald’s over its handling of sexual harassment.

In a letter being sent Tuesday to company Chief Executive Officer Steve Easterbrook, a group of eight senators led by Tammy Duckworth of Illinois, the home state of McDonald’s Corp., decry “unsafe and intolerable” conditions and “unacceptable” behavior in the chain’s restaurants. The group includes 2020 contestants Bernie Sanders of Vermont, Elizabeth Warren of Massachusetts, Kamala Harris of California and Amy Klobuchar of Minnesota.

The missive follows a letter Easterbrook sent last month to Duckworth in which he said McDonald’s had improved its harassment policy and was committed “to ensuring a harassment and bias-free workplace.” The CEO’s letter said the chain was offering a third-party hotline and training on harassment and discrimination, sending “a clear message that we are committed to creating and sustaining a culture of trust where employees feel safe, valued and respected.”

The company’s handling of harassment has been criticized by groups including the National Organization for Women and the union-backed Fight For $15, and by workers who have brought more than 50 lawsuits and Equal Employment Opportunity Commission complaints over the past three years. The complaints, some of which were filed last month, accuse the company of failing to prevent misconduct including groping, inappropriate comments from supervisors, and retaliation for speaking up.

In Tuesday’s letter, the group of senators write that despite recent assurances from McDonald’s, “we remain troubled that the procedures, policies and activities outlined fall short of providing a safe and respectful work environment for all workers who wear the McDonald’s uniform.”

They fault McDonald’s for “sending the wrong message about its priorities” by merely “encouraging” its franchisees to adopt new policies rather than requiring that they do.

“McDonald’s already places enormous requirements on its franchisees, including down to granular tasks and food preparation techniques,” the senators write.

A McDonald’s representative referred an inquiry to the National Franchise Leadership Alliance, an elected body representing franchisees. “We take seriously our responsibility to ensure that individuals who report harassment or retaliation are heard and protected,” NFLA officer Joe Jasper said in an emailed statement. “We will continue to listen and we will continue to act in pursuit of a world where no level of harassment is tolerated.”

The scope of the company’s responsibility for its franchised stores, which make up more than 90 percent of its U.S. operation, has been an ongoing flashpoint between McDonald’s and labor advocates. The advocates have urged the government to deem the company a “joint employer” legally accountable for wrongdoing such as alleged union-busting in its restaurants. McDonald’s has denied wrongdoing and maintained it isn’t a joint employer.