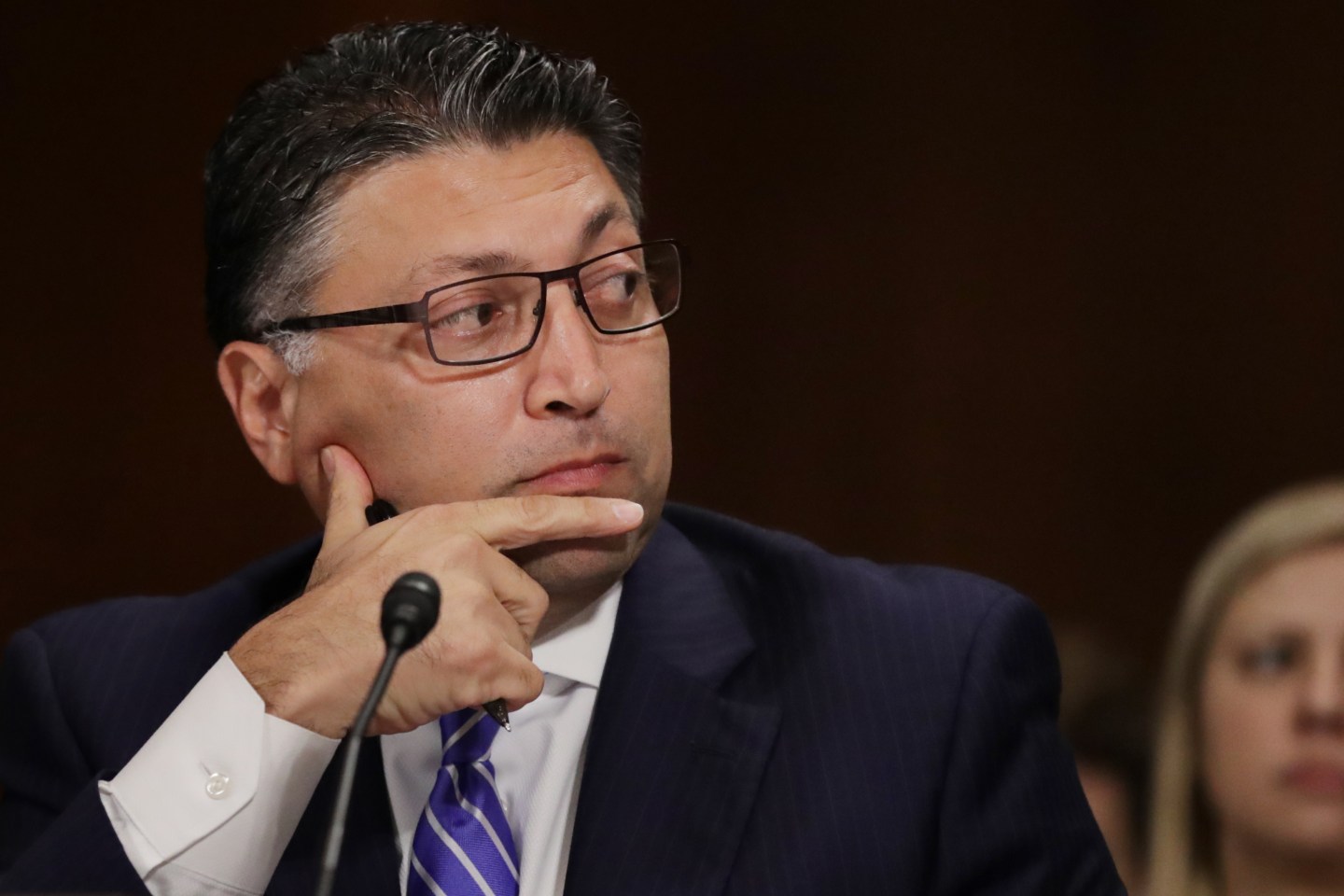 WASHINGTON, DC - OCTOBER 03: U.S. Assistant Attorney General for Antitrust Makan Delrahim testifies before the Senate Judiciary Committee during an oversight hearing on the enforcement of antitrust laws in the Dirksen Senate Office Building on Capitol Hill October 03, 2018 in Washington, DC. The committee continues to be the focus of many in Washington after it requested that the FBI conduct a supplementary investigation into sexual assault allegations against Supreme Court nominee Judge Brett Kavanaugh. (Photo by Chip Somodevilla/Getty Images)
Chip Somodevilla Getty Images

The Justice Department’s antitrust chief came out swinging against Google and Amazon on Tuesday, arguing big technology companies are “digital gatekeepers” that may struggle to defend themselves by arguing their products are free or really cheap.

Makan Delrahim, who recently launched a probe of the industry, compared the digital giants to previous companies that the U.S. government broke up, such as Standard Oil, and defended the power of antitrust laws to police anticompetitive conduct in the tech sector, such as agreements to bundle products.

“The current landscape suggests there are only one or two significant players in important digital spaces, including internet search, social networks, mobile and desktop operating systems, and electronic book sales,” Delrahim said in a Tuesday speech.

The DOJ recently took antitrust oversight of Google and Apple Inc., while the Federal Trade Commission agreed to scrutinize Amazon and Facebook Inc.

Alphabet Inc.’s Google loomed large over Delrahim’s speech — first as a potential beneficiary of the U.S. government’s antitrust case against Microsoft Corp., and then as a company that pursued potentially problematic agreements itself in the search market.

Delrahim described “coordinated conduct that creates or enhances market power,” citing a proposed 2008 agreement between Google and Yahoo to have the former power search ads for the latter. The department told the companies it would file suit against the agreement and the companies backed away, Delrahim said.

The European Union charged Google with antitrust violations for agreements that forced phone makers to preinstall Google apps in return for using the Android operating system for free. Google is appealing. Apple and Google are both facing growing complaints about the fees that they charge developers on their mobile app stores.

When “a dominant firm uses exclusive dealing to prevent entry or diminish the ability of rivals to achieve necessary scale,” that can limit competition, Delrahim explained. Microsoft was accused of using dominance of PC operating systems to quash competition in the web browser market by bundling its Internet Explorer product. The company was ultimately forced to offer rival browsers with the Windows operating system.

Delrahim played a cameo role in the Microsoft case, which he said arguably paved the way for companies like Google, Yahoo, and Apple Inc. to enter the market with their own desktop and mobile products. During the case, he served as counsel to then-Senator Orrin Hatch, who was Microsoft’s chief legislative antagonist. Delrahim quoted Hatch on Tuesday, noting that robust antitrust enforcement to preserve competition in technology was preferable to later regulation.

Many U.S. antitrust experts have dismissed calls for a crackdown on tech companies, arguing that there’s no consumer harm in their conduct because the businesses offer free or cheap services and products. Delrahim dismissed that line of thinking as blinkered.

“The antitrust division does not take a myopic view of competition,” he said. “Price effects alone do not provide a complete picture of market dynamics, especially in digital markets in which the profit-maximizing price is zero.”

Delrahim argued that “harm to innovation” is also an important dimension of competition that can have far-reaching effects.

“Consider, for example, a product that never reaches the market or is withdrawn from the market due to an unlawful acquisition,” he added, immediately after noting low prices or free services from Google and Amazon.com Inc. “The antitrust laws should protect the competition that would be lost in that scenario as well.”

Delrahim said that lack of competition can degrade product quality, citing privacy lapses and free speech questions as examples. Tech platforms such as Google and Facebook Inc. have come under fire for mishandling of these issues.

“By protecting competition, we can have an impact on privacy and data protection,” he said.

The acquisition of startups is a common strategy by tech giants, but some some critics say this can block the rise of potential competitors. Delrahim said he might not be able to define when such purchases are problematic.

—Uber’s CEO has absorbed the COO role for more control

—Google is changing its search results. Here’s what to expect