In Hindsight: How Warby Parker Got Its Start 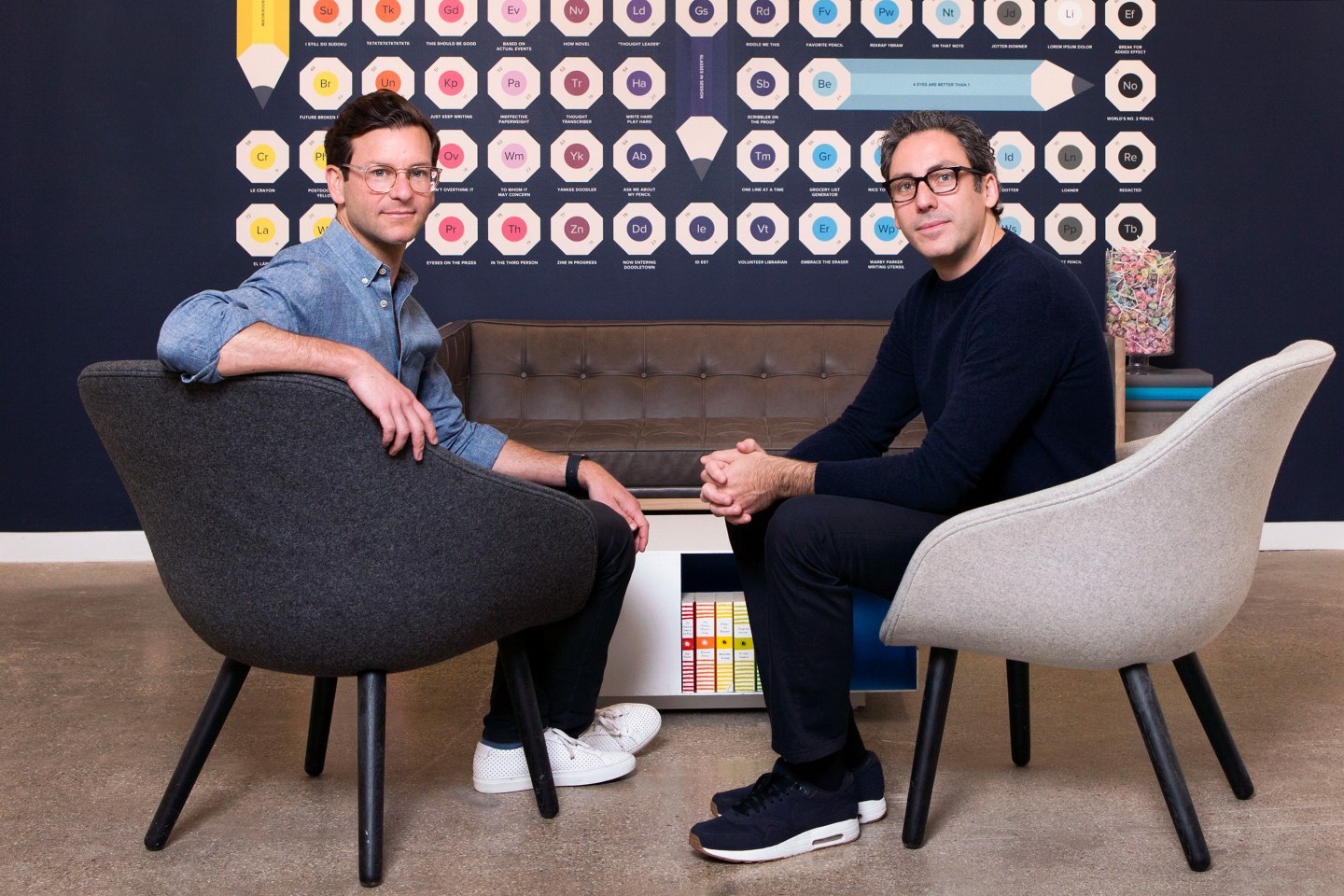 Dave Gilboa and Neil Blumenthal are cofounders and co-CEOs of Warby Parker—the eyewear company that disrupted the industry by drastically lowering prices for stylish frames. It now operates more than 90 physical stores in the U.S. and Canada and is reportedly valued at $1.7 billion.

Dave Gilboa: Both my parents are doctors. I wanted to make a positive impact on the world, and I thought it would be helpful to learn about business. But after working in financial services for a while, I decided to go simultaneously for a master’s in biotechnology at the University of Pennsylvania and an MBA at Wharton. I thought I’d find a scientist working on something great and help to commercialize it.

Neil Blumenthal: My mom was a nurse, and my dad was a CPA. I went to a small Quaker school in Manhattan that was very mission-driven. I ended up working for a nonprofit that trained women in foreign countries on how to start their own businesses selling eyeglasses to people in need. People under­estimate folks with a nonprofit background, and I thought that having an imprimatur from Wharton would help my career. That’s where I met [cofounders] Jeff Raider, Andy Hunt, and Dave, and we became best friends.

Gilboa: In the summer of 2008, before starting school, I took a few months to backpack around the world and lost my glasses on a plane. I went most of the first semester without glasses because I was shocked at the cost. I could buy a new phone for $200, but a pair of [designer] glasses cost $700. I started complaining to anyone who’d listen that I couldn’t believe glasses were so expensive.

Blumenthal: Andy asked, why aren’t people buying glasses online? I knew the margins were big and knew where we could get glasses produced.

Gilboa: So we agreed to meet at a local bar one night to kick around ideas, and when we got home at 2 a.m., one of us sent out a three-page email about the business idea. The rest of us responded and were really excited from the get-go.

Blumenthal: The biggest challenges were how could we move fast enough, thoughtfully enough, and balance our priorities. For a fashion accessory and health care product, we wanted to have a quality product and a brand that would influence culture.

Gilboa: Each of us took the lead on something. I took point on building the website, setting up our supply chain, hiring our first employee, setting up a phone system, and the customer service system.

Blumenthal: I worked on branding, looking at our values and mission. We spent a lot of time getting feedback from customers and focus groups. We wanted to understand the business model of Luxottica [the 800-pound gorilla of the eyewear industry] and the large optical retailers. We were scared and awed. But we knew we could lower the cost of a pair of glasses from $500 to $99.

Gilboa: The four of us each put in $30,000, so that we’d have equal stakes. We launched in February 2010 while we were still in school. The process of starting a business was all-consuming. I had to drop my second degree program.

Blumenthal: We thought that we’d have to beg friends and families to buy glasses from us.

Gilboa: We spent all our money on getting the website built and the initial inventory. We hired a fashion publicist because we knew we needed to get into established publications to develop credibility and relationships. We ended up getting articles in GQ and Vogue, and social media picked us up.

None of us were qualified to build the website, so we solicited proposals and got a handful of bids from agencies. We chose the cheapest option, but a few months in, we realized it was a mistake. Their execution wasn’t what they promised, so we ended up firing them.

Now we develop most of the technology we use in-house to ensure we maintain as much control over the customer experience as possible. We’ve developed our website, a point-of-sale system that we call POE (or point of everything), and both of our apps internally.

Blumenthal: GQ referred to our Home Try-On frames, but within 48 hours of launch, all our glasses were out with customers, so we had to suspend that. We hit our first-year target in three weeks and ran out of inventory. People started calling to complain. We would apologize profusely and explain that the company just got started. We found that the more vulnerable and transparent you are, the deeper the relationship you build with customers.

Gilboa: The customers became champions of the business. They saw that we tried to make them happy. With 2,000 employees now, that’s a lesson we continue to practice in our corporate culture.

Blumenthal: Once we graduated, Jeff went back to the private equity fund he had worked for, then went on to found Harry’s. Andy went on to start Elephant, his own venture capital firm. Warby Parker moved to a loft space in New York, and customers came to try on glasses there. We sold millions of dollars’ worth of glasses through our office and a pop-up store in SoHo, which gave us the confidence to sign a long-term lease for our first store in April 2013.

Gilboa: We’re still at the top of the first inning. As we open more stores, we’re hiring optometrists to make it easy for people to get their prescriptions. We’re using telemedicine so people can do vision checks from home. We’ve expanded our social mission. Five million people around the world have gotten free glasses through our Buy a Pair, Give a Pair program, and we’re now giving free eye exams and free glasses to students in New York City and Baltimore.

Blumenthal: The best businesses solve real problems. We’ve created an example of a business that can scale, be profitable, and do good in the world without charging a premium for it.

A version of this article appears in the June 2019 issue of Fortune with the headline “Warby Parker in Hindsight.”

—How this NYU grad landed an entry-level job at Google