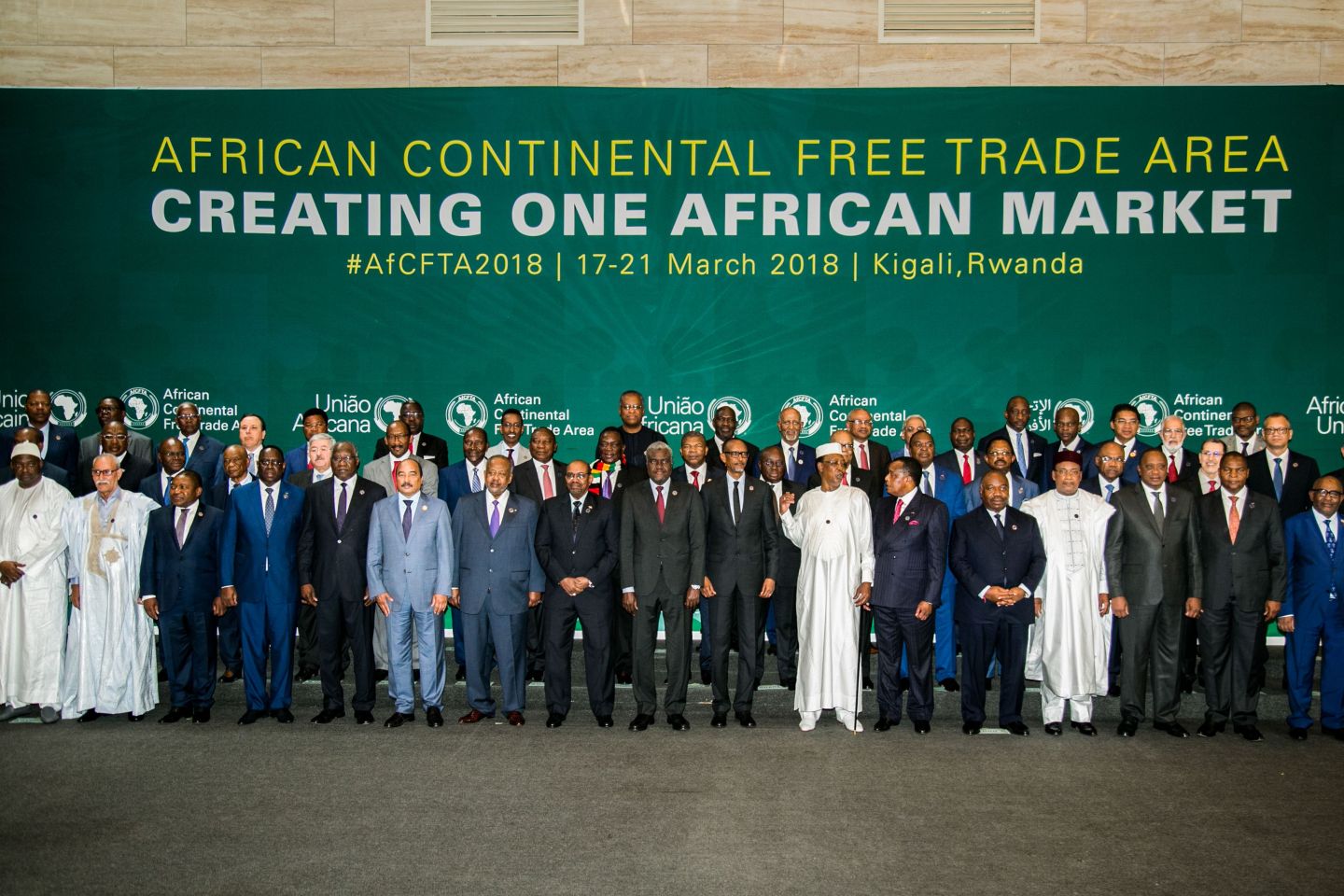 The U.S. ditched the Trans-Pacific Partnership, while across the Atlantic, the U.K. is trying to extract itself from the European Union and its single market.

But while free trade is under threat in much of the world, African countries are heading in the other direction: the continent is on track to create the largest free trade agreement by population that the world has seen since the 1995 creation of the World Trade Organization. That organization has 164 member countries.

On May 30, the African Continental Free Trade Area (AfCFTA) will become a reality. All but three of Africa’s 55 countries have signed up, creating a free trade area that covers more than a billion people and a collective GDP of over $2 trillion, and includes most of Africa’s largest economies, including South Africa and Egypt. If hold-outs Benin, Eritrea and Nigeria—Africa’s largest economy—join in, that’s a total of 1.2 billion people and $2.3 trillion in GDP.

By way of comparison, NAFTA and the EU-Japan free trade agreement each cover a collective GDP of around $22 trillion. But even when added together, they don’t cover as many people as the AfCFTA will if every African nation joins.

Here’s what you need to know about the deal that could transform Africa’s business landscape.

Trade within Africa is in a dire state. A mere 17% of African countries’ exports go to other African countries—compare that with intra-regional trade levels of 59% in Asia and 69% in Europe. That means Africa doesn’t feature much in the way of cross-border value chains.

Why? There’s currently a mess of fragmented tariffs and trade regulations. As Africa’s richest man, the Nigerian billionaire Aliko Dangote, recently complained, a Dangote Industries cement factory that’s a mere 25 miles from the border with Benin finds it difficult to sell its wares into that country, because of Benin’s decision to import Chinese cement instead.

Once the AfCFTA comes into effect, the signatories will need to drop 90% of their tariffs for imports from other African states. According to the United Nations, this could boost intra-African trade by 52.3%. And once countries drop their remaining tariffs, which they will be allowed to maintain for a decade in order to protect key industries, the U.N. says intra-African trade will double.

“When you look at the African economies right now, their basic problem is fragmentation. They’re very small economies in relation to the rest of the world. Investors find it very difficult to come up with large-scale investments in those small markets,” said Albert Muchanga, the African Union’s trade commissioner. “We’re moving away from fragmentation, to attract long-term and large-scale investment.”

Another good reason to boost intra-African trade is that it should create more jobs in more diverse industries, from services to manufacturing. Trade with outside countries tends to rely on sending commodities such as metals and timber to overseas factories—meaning fewer jobs at home, plus over-exposure to commodity prices.

The African Continental Free Trade Area has been a flagship project of the African Union’s “Agenda 2063” development drive for five years now, but it got a major push forward under the AU chairmanship of Rwandan President Paul Kagame last year. Kagame got almost every African country to sign the deal in March 2018. Just over a year later, the 22nd of those countries—Gambia—ratified the deal, meaning the agreement can now enter into force.

Setting up a free trade area does not magically make trade happen. Indeed, there are many obstacles to overcome before that dream becomes reality in Africa.

Problem number one: infrastructure. The physical remnants of Africa’s colonial past continues to hold back trade.

“[Colonial infrastructure] was organized to take the commodities from inland and channel them to the ports, or on to the colonial country for processing. You have very little infrastructure that is meant to do the interconnection across countries and regions,” said Abdoul Salam Bello, a World Bank advisor and Atlantic Council visiting fellow.

According to the African Development Bank, the continent needs $130 billion to $170 billion in infrastructure financing per year, and there’s a shortfall of $68 billion to $108 billion. “This is a challenge, but also an opportunity,” said Bello, who said the creation of a common market could improve the availability of long-term financing in Africa.

Countries will need to fix their corporate laws so businesses can operate across borders with minimal fuss. Then there’s the skills issue, which will come to the fore as companies try to build international value chains and countries industrialize to make this possible. In Ethiopia, for example, the government is pushing to boost manufacturing’s share of the economy from 5% to 20% by 2025, and this has meant working with industry to train the necessary workforce.

“Some other countries don’t have this strategic shift of the economy toward industrialization,” said Bello. “It speaks to research and development. You need scientists; you need engineers.”

Nigeria remains the biggest absence in the new trade area—and a large one, too, as Nigeria accounts for a sixth of Africa’s GDP. It originally pulled out of talks because, per President Muhammadu Buhari, the agreement could “undermine local manufacturers and entrepreneurs, or… lead to Nigeria becoming a dumping ground for finished goods.”

The fear here was that cheap overseas goods could flow into Nigeria via other African countries. Nigerian manufacturers backed Buhari’s protectionist stance.

However, South Africa—Africa’s second-biggest economy—then signed up to the free trade deal, and Buhari changed tack. He told reporters in December that he would sign it soon, and would have already done so if it weren’t for the fact that he is “a slow reader.”

Buhari still hasn’t signed, though. According to Bello, the Nigerian private sector is still concerned about protecting local manufacturing. Muchanga said the Nigerian Chamber of Commerce was “on board,” but he didn’t know when the country would sign the agreement.

The main point of the AfCFTA is to benefit Africa and Africans, but that doesn’t mean it doesn’t create opportunities for outsiders.

“Some companies hardly go to Africa because they find the market too small for them,” said Bello. With the new free trade area, that could change—a big U.S. firm could for example set up shop in a major country such as South Africa or Ethiopia, knowing it could use that as a base to expand into other African countries as well.

Over time, if all goes to plan, the AfCFTA will also lead to new trade agreements with countries outside Africa—but this time with Africa maintaining a united front, much as the European Union does today.

That would mean setting up a full-blown customs union—something Muchanga said will happen “when the member states have agreed” it should—and perhaps even a common currency; an idea that is already gathering steam at a regional level in West Africa and East Africa.

“The purpose is not to create a copy-and-paste of the European common market,” said Bello. “It has to take on board African issues and context. But that doesn’t mean we have to reinvent the wheel.”