Murals Are the Must-Have Accessory for New Seattle Hotels 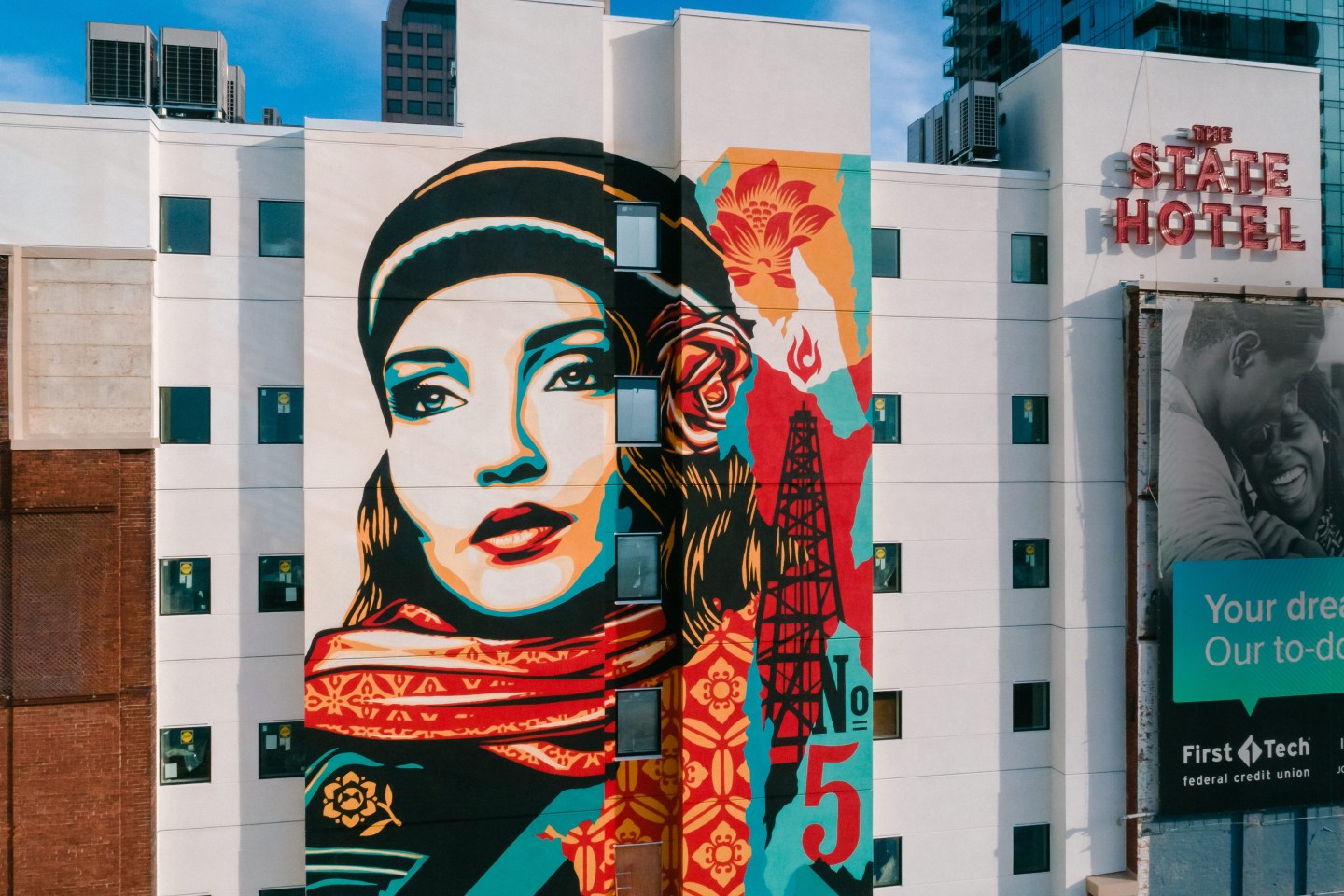 After years of room shortages in high season, Seattle’s recent boom has brought a half-dozen major new hotels to the city since last summer, alleviating the competition for space—at least a little.

But the glut also pushes hotels to go above and beyond to impress locals and visitors, and that’s adding some color and art to the city. As each of the new hotels open, they aim to cement their place in a skyline full of competitors, to demonstrate their worthiness—that they’re a part of the city and they support Seattle. Lately, that means putting up a mural.

At the State Hotel, which opened in March on 2nd Avenue near Pike Place, General Manager Rob Nichols says his team wanted to the hotel to be “an approachable place, something the city and its people can be proud of.” So they had renowned artist Shephard Fairey (the artist behind the iconic Obama “Hope” poster) paint an eight-story mural on the outside of the hotel. “You’ve got this old historic building overlooking the Pike Place Market, this beautiful canvas to utilize,” says Nichols.

The hotel allowed Fairey the freedom to come up with his own design, called Fire Sale, which depicts “the challenges any individuals faces while pushing for environmental and climate responsibility,” according to the artist. A woman’s face, staring out from under her hat and a flower, stands out from the skyline to people arriving into the city by ferry or looking up from the streets below. “It was an opportunity to showcase this amazing muralist to a large audience,” explains Nichols, which he says ties into how the hotel supports local art in guest rooms and the lobby—including the huge wall in the restaurant painted by Seattleite Kyler Martz.

It’s a slightly different motivation than what brought The Sound Hotel in Belltown to commission its mural. In preparation for their February opening, the management realized they had a few rooms with a problem: some had absolutely terrible views. “Oh my God, what are we going to do here?” recalls David Watkins, the hotel’s general manager. “It’s so dark, and up against a wall.”

The blank wall in a dark outdoor alcove faced a handful of rooms, but belonged to the iconic Cinerama movie theater next door. So they tried to figure out how to activate the dull space—eventually getting in touch with artist Jeff Jacobson, also known as “Weirdo.” The hotel got developer Vulcan Real Estate—owners of Cinerama—to let them paint the space and then worked with the artist to create something that represented the city.

The result is a colorful forest scene, woven into the image of a large guitar: “A multi-dimensional view of the Pacific Northwest,” the artist described on his Instagram. Unlike the Fairey mural, projecting over the entire city, this one is like a sweet secret, nestled inside the hotel for customers in the know.

A similarly small audience will get to see the new mural going up in the tasting room of the Hyatt Regency in the Denny Triangle that opened at the end of last year. The sixth-floor space set to host the artwork is a private dining area offering catering and tasting menus—a “chef’s playroom,” describes the chef in question, John Pivar.

The Hyatt is having noted Seattle sketcher Patrick Nguyen (also known as “Dozfy”) create a scene—featuring the skyline, the Space Needle, seafood, and other local products—and paint them onto a 22-foot wide wall. Pivar sees it as a starting point for making conversations happen. “You walk in and see that,” he says, adding it puts customers into the mindset of who they—the hotel and the restaurant—are. “Proud to be Seattle, loving the fact that this area has so many products to offer.”

Whether they go big, like the State, let people in on a secret like the Sound, or just try to get people talking like the Hyatt Regency, the main point with these murals, as Pivar says, is that they make “a really big statement without having to say a lot of words.”

—What it’s like to stay at a remodeled Trump hotel