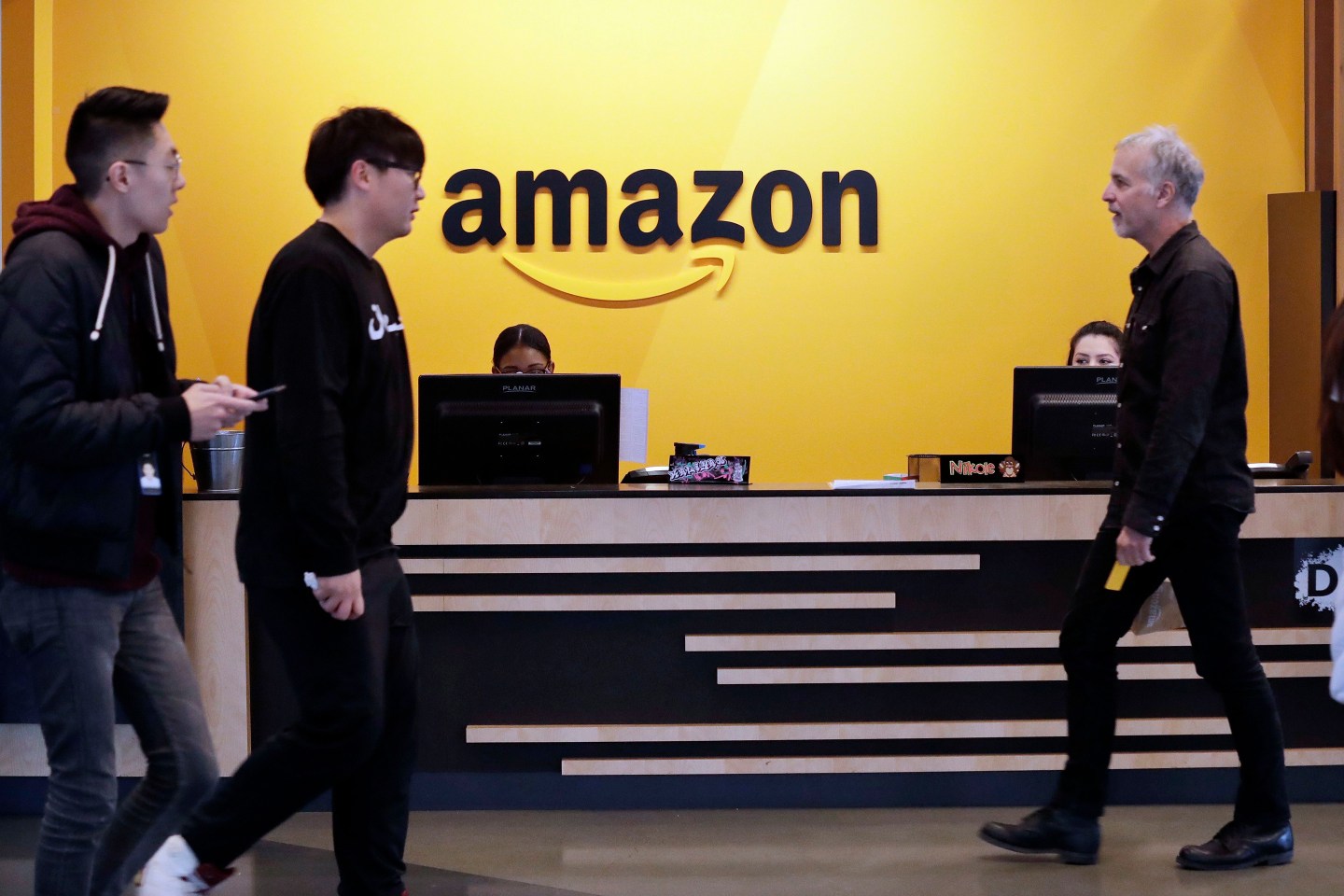 Mandatory Credit: Photo by Elaine Thompson/AP/REX/Shutterstock (9977727a) Employees walk through a lobby at Amazon's headquarters, in Seattle. Amazon, which is growing too big for its Seattle hometown, is spreading out to the East Coast. The online shopping giant ended its 14-month-long competition for a second headquarters Tuesday by selecting New York and Arlington, Va., as the joint winners Amazon HQ, Seattle, USA - 13 Nov 2018
Elaine Thompson—AP/REX/Shutterstock

The amended complaint, made public on Tuesday, claims Deap Ubhi, a former employee at a high-level Defense Department technology unit, helped design the cloud contract in a way that was favorable to Amazon after receiving “significant” job and bonus offers from the e-commerce giant.

Oracle’s latest court action comes weeks after the Pentagon announced it had eliminated Oracle and International Business Machines Corp. from the bidding because they didn’t meet the minimum criteria, leaving Amazon and Microsoft Corp. as the last remaining competitors.

The Pentagon, which announced the so-called JEDI competition in March of last year, doesn’t expect to award the contract before July 19.

Ubhi, who had worked at Amazon before joining the government, helped craft the Joint Enterprise Defense Infrastructure, or JEDI, procurement for weeks after accepting a job offer in October 2017 from Amazon Web Services, the company’s cloud unit, according to the lawsuit. Ubhi then made up an “elaborate lie” about an Amazon offer to buy his startup company, Tablehero, when he “belatedly” recused himself from working on the contract, the lawsuit alleges.

The lawsuit also contends that an unnamed former official connected with the Navy participated in the JEDI contracting process even after accepting a position with Amazon Web Services.

An Amazon representative didn’t immediately respond to requests for comment. The Defense Department declined to comment. Efforts to reach Ubhi through multiple emails and by telephone were unsuccessful.

Oracle’s lawsuit also made conflict-of-interest allegations about Anthony DeMartino, former deputy chief of staff in the secretary of defense’s office. DeMartino had previously consulted for Amazon Web Services before assuming his role at the Pentagon.

In November, the U.S. Government Accountability Office also rejected Oracle’s conflict-of-interest allegations in a separate protest. The watchdog agency said the evidence it reviewed indicated that neither DeMartino nor Ubhi had substantive input into the contract’s terms or the procurement process.

Tech companies including Oracle banded together in an informal coalition last year to urge the Defense Department to split the contract among several suppliers.

They said the winner-take-all approach would lock the Pentagon into a single vendor and would heighten security risks. The department has said that making multiple awards under current acquisition law would be a slow process that could prevent it from quickly delivering new capabilities.

The JEDI contract could threaten the growth of a longstanding business that IBM and Oracle have with the Defense Department as it seeks to move its legacy technologies into a commercially-operated cloud system. Both companies were late entrants into the cloud market and have struggled to catch up to Amazon in the private and public sectors.

Amazon was widely seen as the frontrunner for the cloud contract because it previously won a $600 million deal cloud deal from the U.S. Central Intelligence Agency and obtained higher levels of federal security authorizations than its peers.

Oracle Executive Vice President Kenneth Glueck, who leads the company’s Washington lobbying operation, said in a recent interview with Bloomberg News that the company will continue to challenge requirements for the contract in conversations with lawmakers on Capitol Hill.

“You read the RFP, and it just screams Amazon,” Glueck said in an interview April 26, referring to the Defense Department’s request for proposals. “The RFP emphasizes all the things Amazon is very good at” and “completely de-emphasizes the things they’re not very good at.”