What Is Ranked-Choice Voting? An Exercise in Representative Democracy, Reformists Say 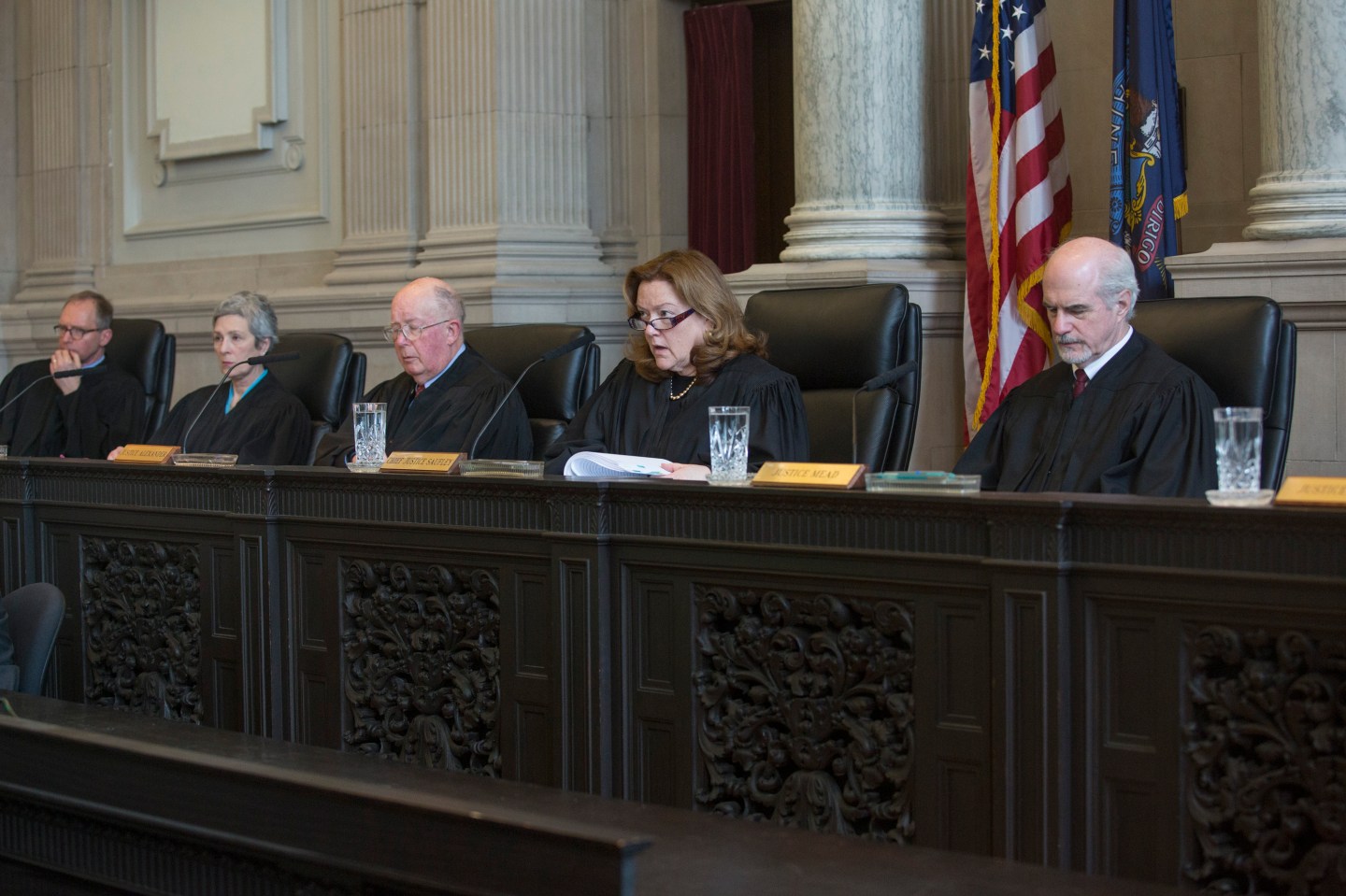 People around the country are imagining new ways to decide their elected officials, especially in recent years. Some voting rights advocates have been working to overhaul the Electoral College, while others also have their sights set on a new method of voting.

Voting reformists are organizing to set up a system of ranked-choice voting that would guarantee every vote counts and that advocates argue will transform U.S. politics.

Adam Friedman, the executive director of Voter Choice Massachusetts, told Fortune that ranked-choice voting could prevent candidates from winning elections without broad public support. He pointed to the 2016 presidential election, during which Donald Trump won the Republican primary, but not with a majority of the vote.

“Because there were so many options to choose from, it fragmented the vote and split up the majority,” Friedman said.

But what is ranked-choice voting, and how would it work? Here’s what you need to know.

What is ranked choice voting (RCV)?

Ranked-choice voting is not a new concept. The system was first invented in the 1850s and was used in European elections, and later used in state-level elections in Australia. U.S. cities started implementing it in the early 1900s.

As the name suggests, ranked-choice voting is a system that allows voters to tally their preferred candidates and rank them according to their first choice, second choice, and so on.

The process could include multiple rounds to narrow down the candidate pool, unless a candidate wins the majority with more than 50% of the vote in the first round.

If no one wins a majority, the candidate tallied with the fewest votes is eliminated from the race. In that case, any votes that were cast for the eliminated candidate would then be re-allocated to a voter’s second choice candidate. The process continues until one candidate reaches the majority threshold, making them the winner of the race.

According to advocates, not only does this system ensure that every vote counts, it also keeps candidates and voters engaged with one another and opens up the political race.

“Ranked-choice voting helps people who want to run but are discouraged from running maybe because they will split the race,” Maria Perez, a campaign manager with Common Cause New Mexico, told Fortune. “That’s not democratic. People who want to run should run and have a voice at the table.”

The city of Santa Fe used ranked-choice voting for the first time last year in its mayoral and city council elections, where it was largely successful.

“Voters were super engaged, there was a good turnout, and a good shift in how candidates were campaigning,” said Perez.

According to a survey from FairVote New Mexico, nearly 62% of voters ranked all five candidates in the city’s mayoral race, and voter turnout was up nearly 10% from the previous election in 2014.

Moving forward, ranked-choice voting could be one way of ensuring that every vote counts in the upcoming 2020 Democratic primaries.

As it stands, the rules of the Democratic National Convention on delegate allocation in the primaries would make it so that thousands of primary voters “have no influence in the selection of the 2020 presidential nominee,” Adam Eichen, an activist and author, argues in In These Times.

This is because all 21 of the Democratic candidates running for president would need to win at least 15% of the vote in a given state to earn any delegates, and in a race with so many contenders, most candidates are not likely to meet the threshold. “As such, voters who support these candidates will have their votes effectively wasted,” Eichen wrote.

In a ranked-choice voting system, that would change.

Candidates would face elimination from the bottom up, but candidates would also need to engage with voters outside their own base to win second- and third-choice votes.

“The conversation changes for people running and they end up engaging more with voters’ interests,” Rob Richie, the president and CEO of FairVote, told Fortune. “It creates an incentive to stay positive, stick to issues, and find common ground that appeals to the majority of voters.”

Are there cities and states that have a RCV system in place?

Yes, actually. As of this year, cities in 21 states have adopted a ranked-choice voting system in some form, including for military and overseas voters to participate in runoff elections, like in Alabama and Arkansas. It’s been used in local elections in cities in Colorado, Florida, and California; and in congressional and state-level elections in Maine.

In 2016, Maine residents voted in favor of installing the system, which it implemented in June 2018. That fall, the U.S. saw the first ever ranked-choice federal election in Maine’s Second Congressional District in the 2018 midterms.

But the state also had its fair share of clashes over the new system. After Republican incumbent Bruce Poliquin lost in the race to Democrat Jared Golden, he demanded a hand recount of votes.

Prior to the race, last may, Jason Savage, the executive director of the Maine GOP filed a lawsuit in the U.S. District Court in Bangor to stop the new system from being implemented, arguing that the First Amendment protects the party’s right “to select our nominees the way we choose, and that will be the traditional method.”

Despite the disputes over ranked-choice voting in Maine, the state implemented the system for the first time last fall.

Richie explained that one challenge of implementing a ranked-choice voting system for voters and representatives alike is the transition time, which “can create some ill will.” In Maine, for example, Poliquin lost the election, “so he resents the system,” said Richie.

Ranked-choice voting has also gained some traction in caucus states. A presidential caucus is different than a primary because it requires party members to hold a meeting where they can debate candidates before casting a vote by show of hands.

Iowa’s Democratic Party in February proposed using ranked-choice voting for people who can’t attend the caucus in person, which the state will implement next year. Meanwhile Nevada, Hawaii, and Alaska all proposed integrating the same system into their delegate allocation processes.

What do opponents of RCV think?

Opponents of RCV say it’s flawed for a number of reasons. Some argue that a ballot with multiple candidates can be exhaustive and voters won’t rank everyone.

Others have said it’s too complicated of a system and voting should be easy, or that it’s a “project of the ideological left.” Some have also argued that the system promotes negative campaigning—of which there is currently no shortage.

“We have a very negative and contentious process that gets into the realm of attacks on people’s character rather than policies and issues,” said Friedman.

Proponents say it’s not partisan, but about representative democracy.

“Over decades and decades the political system has been deteriorating,” said Perez, who argued that politicians have become more sympathetic to lobbies than voters. “People are waking up to this and seeing that it’s really bad, and it’s going to kill us and our communities.”

While these new voting processes are gaining traction locally and at the state-level, political leaders are watching.

Several 2020 Democrats have backed the initiative to abolish the Electoral College. Massachusetts Sen. Elizabeth Warren said it was one way to make sure that every vote counts, while Indiana’s Pete Buttigieg and Beto O’Rourke of Texas both agreed it’s something worth discussing.

At least one Democratic candidate also has ranked-choice voting on their radar. Former tech executive Andrew Yang told the Washington Post that he supports making changes to the presidential election process, “including how electors are apportioned and implementing ranked-choice voting.” He has even included the issue in his 2020 platform.

While it won’t be possible to implement this system nationwide before the start of the 2020 Democratic primaries next year, advocates are laying the groundwork now for what could be a significant change to the election process.

“Ranked-choice voting is not so much an overhaul, but an addendum to the ballot,” said Friedman. “Voters can still do what they do now, but they get more power.”