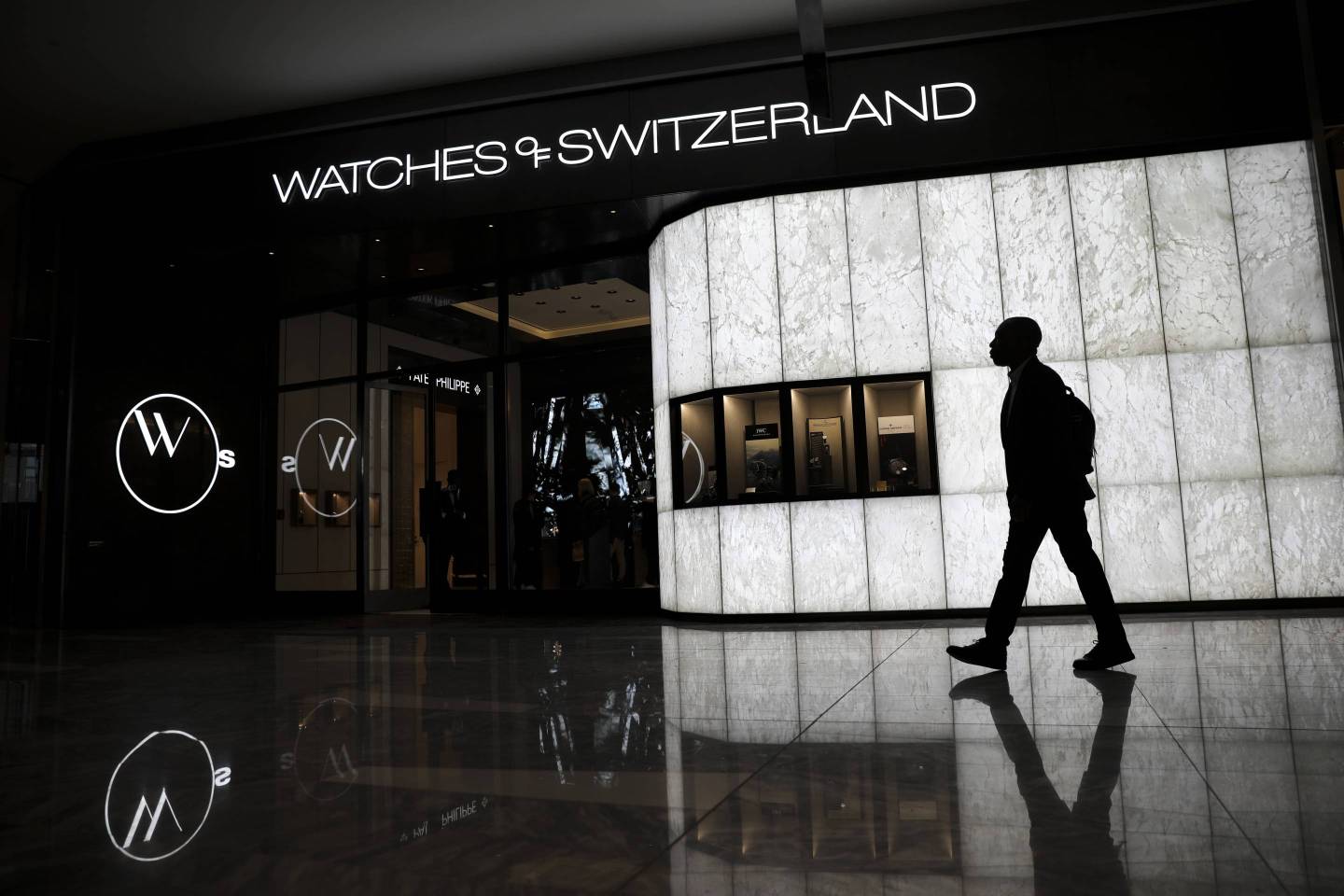 NEW YORK, NY - MARCH 15: A man walks past a Watches of Switzerland store at 'The Shops' during the grand opening of phase one of the Hudson Yards development on the West Side of Midtown Manhattan, March 15, 2019 in New York City. Four towers, including residential, commercial, and retail space, and a large public art sculpture made up of 155 flights of stairs, called 'The Vessel,' will open to the public. The developer of the project, Related Companies, calls it the most expensive endeavor in the city since Rockefeller Center. (Photo by Drew Angerer/Getty Images)
Drew Angerer Getty Images

Watches of Switzerland Group Ltd., the U.K.’s biggest seller of luxury timepieces, said it’s considering an initial public offering in London that could help fuel expansion into the U.S. market.

The move would allow private-equity company Apollo Global Management to reduce its stake in the retailer, which handles about half of Rolex’s U.K. sales. It also could give impetus to the company’s expansion in North America, where it has become the largest luxury watch seller in the southeastern U.S.

While the bulk of the retailer’s revenue comes from the U.K., Watches of Switzerland considers its market in the U.S. underdeveloped due to lack of investment. It recently opened a store in the New York retail complex Hudson Yards. The company said it believes its newcomer status gives it an advantage in that market.

The company sees growth opportunities in both the U.K. and U.S., Chief Executive Officer Brian Duffy said in a Bloomberg TV interview.

Watches of Switzerland’s sales have expanded at an average rate of 18% over the past five years, outperforming most rivals as the biggest Swiss watchmakers increasingly try to eliminate their reliance on middlemen. Cartier, Audemars Piguet, and Vacheron Constantin have found they can enjoy more of the profit themselves by selling timepieces in their own boutiques.

“The luxury market in the U.K. has been consistently good,” Duffy said.

Watches of Switzerland is trying to carve out a bigger role for brands that still are interested in selling through third parties, including Rolex, and says it’s got a technological edge over smaller independents. Still, Switzerland’s total watch exports have been slowing lately after growth of 6.3% in 2018, according to trade group data.

The company’s full-year revenue rose 9.2% on a like-for-like basis to 773 million pounds ($1 billion). CEO Duffy said in January that an IPO was one option Apollo was considering, after acquiring the retailer six years ago.

The offer would consist of new and existing shares, and Apollo plans to keep a controlling stake, the retailer said Thursday. The company said it expects at least 25% of its shares will be freely traded on the market.

Watches of Switzerland’s 252 million pounds ($193.74 million) of bonds rose to a record 105 pence ($1.37) as the company said the IPO would enable it to cut debt. The notes, which were issued last year, have recovered from a low of 92 pence ($1.2) in January, data compiled by Bloomberg show.