As the U.S. and EU Trade Tariff Threats Over Boeing and Airbus Subsidies, a Chinese Upstart Looms 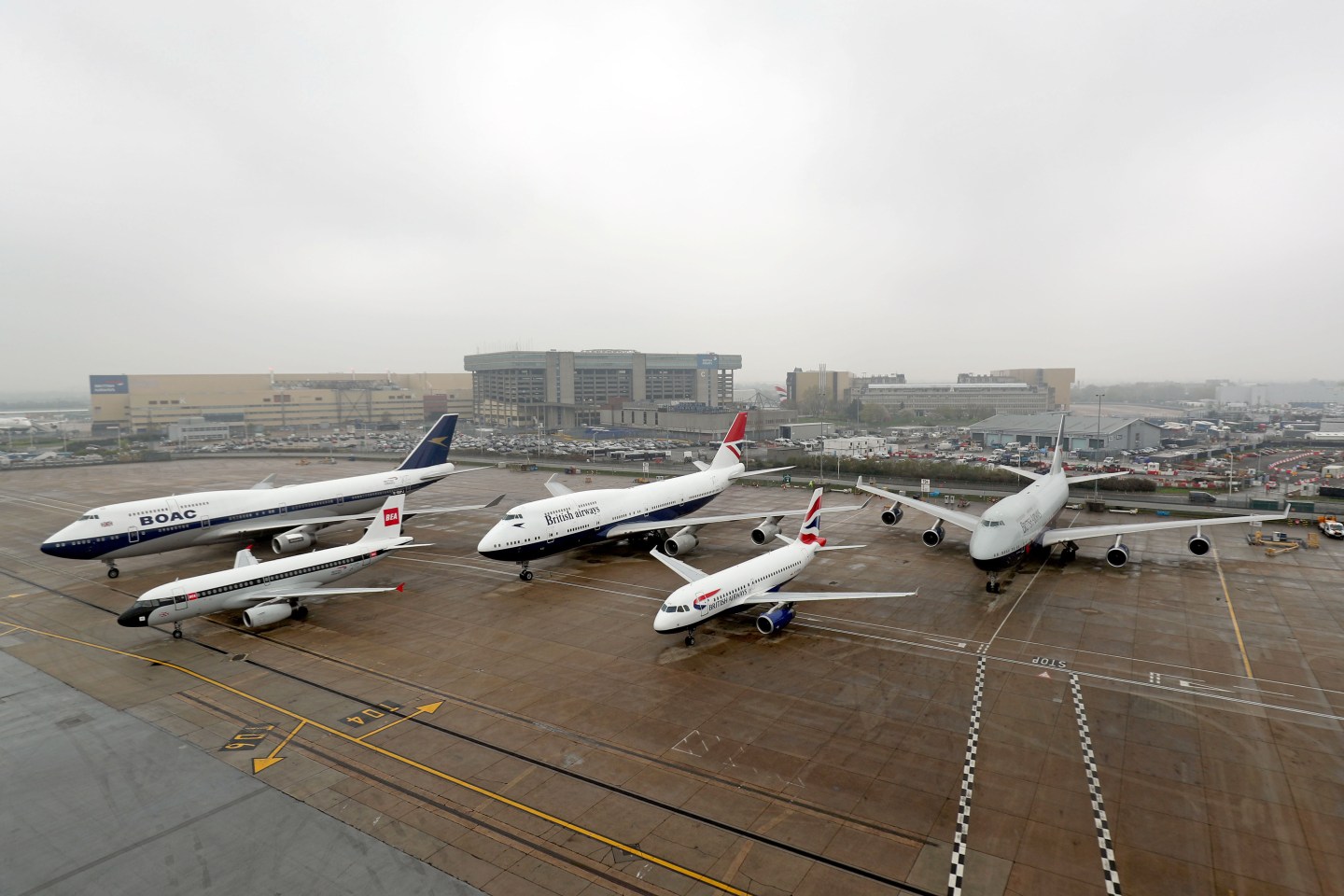 The European Union on Wednesday unveiled a list of $20 billion worth of U.S. imports that it might hit with tariffs in retaliation for tariff threats made last week by the U.S. If the EU goes ahead with the tariffs, on goods such as suitcases and tobacco, the figure will probably end up around $13.5 billion at most, but that will still sting.

This may seem like a rapidly escalating situation that came out of nowhere, but it represents the endgame of a dispute that goes back around 14 years. At the heart of it: planes made by Boeing and Airbus, the duopoly that controls 99% of the global market for large commercial aircraft. And to be exact, the government subsidies that allow Boeing and Airbus to build their planes are at issue here. Boeing gets federal and state subsidies in the U.S., while Airbus is the beneficiary of subsides from the EU and its national stakeholders, France, Germany, Spain and the U.K.

That the U.S. and EU bolster their respective aerospace giants is a basic fact of the industry at this point. Yet the firms’ fierce rivalry and the enormous market share at stake means the U.S. and EU have challenged the other’s state-sponsored support—It’s fundamentally unfair! It’s market-distorting!—for well over a decade.

Both sides’ claims have been at least partially upheld by the World Trade Organization, and those victories mean that each has the opportunity to hammer the other with tariffs. In other words: it’s payback time.

But as the U.S. and EU trade threats on behalf of their industrial champions, an upstart aerospace firm could pose a threat to Boeing and Airbus’s long-term lock on the market. And it’s not wasting time worrying about subsidies; in fact, it’s welcoming state aid from an enthusiastic booster: China.

The U.S. launched its case against state support for Airbus’s plane-building programs in 2004, targeting things like R&D funding and so-called “launch aid”—loans that only need to be repaid when the beneficiary hits delivery targets. The WTO was receptive to the argument, agreeing in 2010 that Airbus’s A380 program had received $18 billion in prohibited subsidies from Germany, Spain and the U.K. Afterwards, the EU claimed it had halted the illegal subsidies, but last year the WTO said it hadn’t.

That ruling means the U.S. gets to hit the EU with retaliatory tariffs of a size to be determined by a WTO arbitrator later this year. When the U.S. last week published its list of $11 billion worth of EU goods on which it might slap a duty, covering everything from planes to seafood and tweezers, that was essentially a wish list.

Meanwhile, the EU’s counter-case against the U.S. began in 2005 with a complaint about federal, state and local government subsidies for Boeing. At issue: tax breaks and infrastructural subsidies, plus the benefits Boeing gets from its R&D and intellectual property deals with NASA and the Defense Department.

Again, the WTO played ball, ruling in 2012 that Boeing had received at least $5.3 billion in illegal funding that helped get the 787 Dreamliner airborne. The U.S. fixed all but one of those issues; a tax break from Washington state worth around $100 million a year was still in effect, according to a WTO ruling last month. That finding is why the EU wrote its own tariffs wish list on Wednesday—again, the WTO arbitrator will determine an acceptable amount.

If the tit-for-tat nature of this dispute has you scratching your head, rest assured you’re not alone.

“It is true that all of the big aircraft manufacturers in the world are heavily subsidized,” said Simon Lester, the associate director of the Cato Institute’s Herbert A. Stiefel Center for Trade Policy Studies. “The issue is that the various companies think their competitors’ subsidies are somehow worse or more unfair.”

Airbus did receive more illegal subsidies than Boeing did, and without that aid it wouldn’t have had the incentive to “go ahead with a product that might not sell,” Lester said. However, he said other subsidies brought up in the cases were also market-distorting, including Boeing’s tie-ins with the U.S. military.

Aviation analyst Shukor Yusof of Endau Analytics in Singapore said it was “a bit rich” for one company to accuse the other of receiving unfair advantages. “The bottom line is that both manufacturers get help from their governments, or in Boeing’s case from the state of Washington,” he said.

Of course, the tariff threats and counter-threats also come at a pivotal time for both companies. Boeing will likely take a big financial hit due to grounding of its entire 737 Max fleet, following two fatal crashes in recent months. Airbus, meanwhile, is abandoning the A380 due to poor sales and, on Monday, it also entered a new era with sweeping leadership changes—Yusof said this could open the way for a new strategy whereby Airbus weans itself off state subsidies and becomes “more commercially competitive.”

Airbus did not respond to a question regarding how it would fare without the illegal subsidies. As for Boeing, a spokesperson for the American manufacturer said it could not “speculate as to financial impacts” of the withdrawal of the Washington tax break.

While Boeing, Airbus, and their respective state sponsors trade punches, there’s a looming risk they could all get blindsided from behind.

In fact, France has warned against any escalation of the trans-Atlantic subsidies argument, with Finance Minister Bruno Le Maire saying last week that it could “play into the hands” of a potentially significant competitor to both companies: the Commercial Aircraft Corp of China, or Comac.

Comac, in partnership with Russia’s United Aircraft Corp, recently unveiled proposals for a long-haul widebody jet. It is already selling smaller models to Chinese carriers such as Chengdu Airlines, and trying to target some emerging markets such as Ghana with those regional planes. And all with the Chinese government’s support.

“With Comac, unlike Boeing and Airbus, the Chinese have made no bones about supporting and developing Comac,” said Yusof. “They’re not even making any attempt to hide the fact that they’re supporting it with money and resources.”

Lester suggested that the Boeing-Airbus dispute could be in part an attempt to establish ground rules about subsidies that might, in the future, be wielded against the Chinese upstart.

However, that tactic is unlikely to be necessary for a long while yet. Comac’s planes are as yet not certified by the U.S. Federal Aviation Administration (FAA) or the European Aviation Safety Agency (EASA,) which severely limits where they can fly.

“There will come a time, in 20 years at least, when they will come up to speed, but… I do not think the Chinese will be able to catch up in the near future or even in the midterm future,” said Yusof.

Of course, when it comes to trade, the U.S. and EU aren’t just arguing about plane subsidies right now. The U.S. has hit the EU with steel tariffs and is threatening to do the same to imports of European cars. The EU has threatened to lob massive tariffs in the other direction, by way of retaliation. The EU on Monday also gave its negotiators the green light to start talking to their American counterparts about a new trade deal.

“The EU has taken advantage of the U.S. on trade for many years. It will soon stop!” President Donald Trump tweeted last week, when the U.S. published its tariff proposals.

EU Trade Commissioner Cecilia Malmström, meanwhile, was a tad more measured on Wednesday. “We must continue to defend a level-playing field for our industry, but… we do not want a tit-for-tat. The EU remains open for discussions with the U.S., provided these are without preconditions and aim at a fair outcome.”

Is there a risk of the subsidies dispute becoming just another facet of the wider negotiations? Not according to Lester, who says the subsidies issue is effectively contained within the WTO ecosystem.

“Trade officials on both sides realize that Trump’s threat to impose tariffs in response to Airbus subsidies is just playing within the rules,” said Lester. “In a year or two, the EU will be able to retaliate against the Boeing subsidies. Everybody who matters, everybody’s who’s in charge, understands that Airbus and Boeing is self-contained and won’t affect other U.S.-EU trade issues.”

“They can come to some form of agreement before it finally gets to the crunch,” said Yusof. “The relationship between the U.S. and EU is so intricate, and any negativity surrounding this would have a major impact on other parts of their relationship.”