10 Books in Business and Journalism You Should Read This Spring 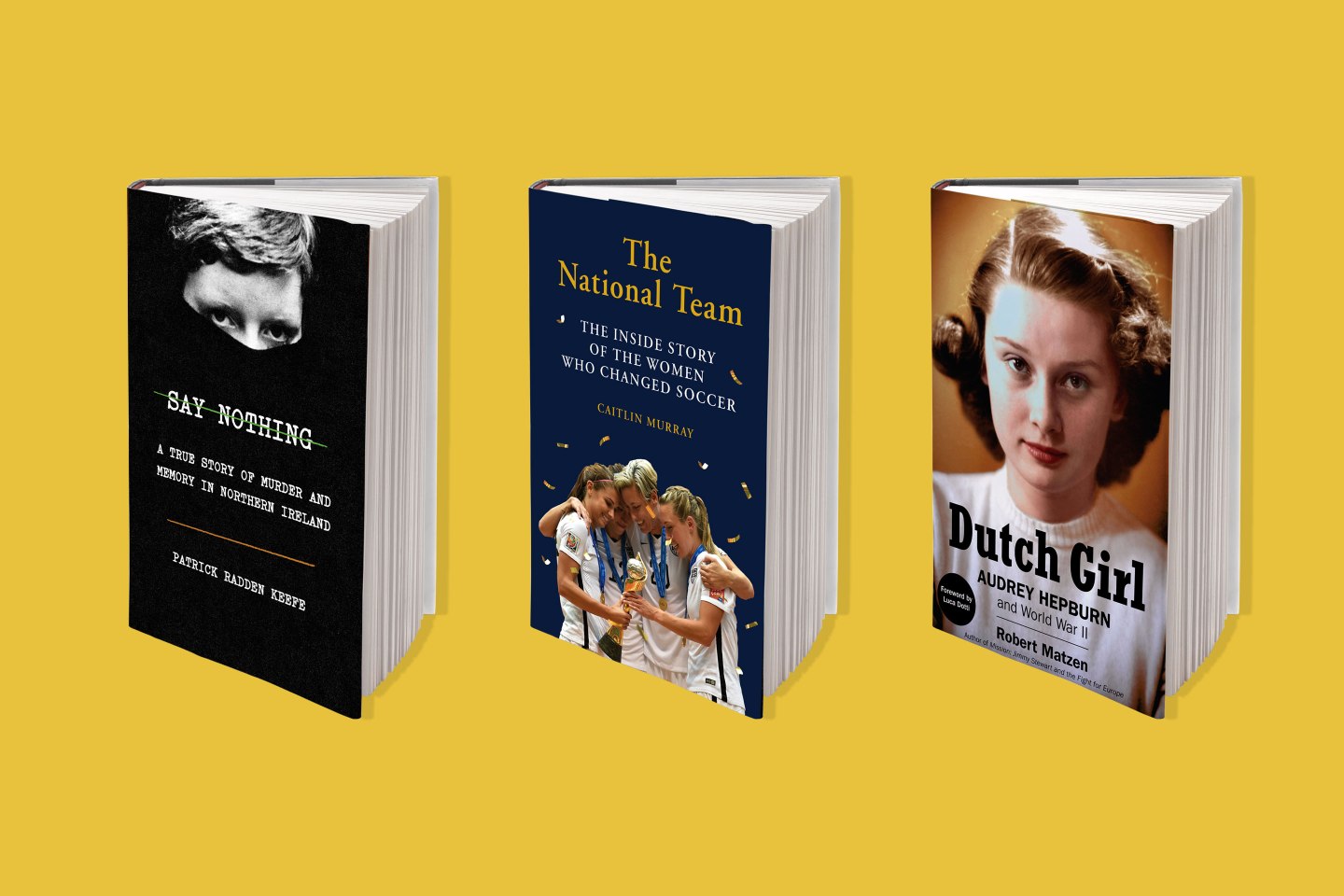 Say Nothing, The National Team and Dutch Girl should be on your reading list.
Doubleday; Abrams, GoodKnight Books

The days are longer and the sun is out later, and while that might seem like a prime time to get out of the house, that doesn’t mean you have to leave your books at home. This spring is already fruitful for the publishing industry, still riding the success of semi-recent releases like Michelle Obama’s memoir Becoming and Delia Owens’s novel Where the Crawdads Sing. Looking forward, there are a number of new noteworthy nonfiction releases in the names of business and journalism that are well worth your consideration.

Doing Justice: A Prosecutor’s Thoughts on Crime, Punishment, and the Rule of Law by Preet Bharara

Before he was one of the first of many to be fired by President Trump, it’s hard to say how many people knew the name Preet Bharara outside of New York City or legal circles, or even just New York legal circles. But the former U.S. Attorney for the Southern District of New York has since taken on the unofficial mantle as one of the esteemed critics of the current administration, frequently sharing candid takes on MSNBC and becoming prolific on Twitter, gaining more than a million followers. However, even with recent events in mind, Bharara’s book relies on his previous case histories and legal career to do the talking in their own right, letting the reader draw for themselves the lessons and conclusions about the state of the U.S. legal system and where it could go next.

Just two years in to the Trump administration, and there doesn’t seem to be any shortage of material for book after book about the current White House. (One can only imagine how many there will be after Trump’s exit, whether that’s in two years or six years.) The family Trump, in particular, generates the most fascination, not only with readers but clearly with journalists and authors themselves. Honing in on two of the most mysterious characters in House Trump, Vicky Ward picks up somewhat where Vanity Fair‘s Emily Jane Fox left off in last year’s Born Trump, which spent time with each member of the immediate family. Like with any unauthorized book, there were denials and backlash from Jared and Ivanka, through their attorneys. But like with many of the books that have come out about administration officials, many of the stories in Ward’s book have lined up with previously published accounts in most major mainstream outlets. Either way, it’s a juicy read.

Say Nothing: A True Story of Murder and Memory in Northern Ireland by Patrick Radden Keefe

To say this is a book about The Troubles is much like the use of the term “The Troubles” in itself: an oversimplification. New Yorker staff writer Patrick Radden Keefe does a masterful job of weaving together a myriad of narratives, themes, and characters to formulate a single book that is part history, part journalism, and part murder mystery. Even the title, Say Nothing, has a dual meaning: partially lifted from a Seamus Heaney poem and also a mantra for survival in Northern Ireland during three decades of terror and bloodshed. And yet, amid all of the heaviness and historical details, the book never feels overwhelming because it stays rooted among a core cast of characters. The narrative flows so fluidly that it almost feels like you’re reading a treatment for a screenplay to the next great HBO drama. Keefe manages to pull of this task—and possibly even solve one of the mysteries that propelled him to write this book—while maintaining a dedication to journalism and neutrality over a topic that is largely absent of any kind of neutral ground.

The National Team: The Inside Story of the Women Who Changed Soccer by Caitlin Murray

Currently the reigning World Cup and Olympic champions, the U.S. Women’s National Soccer Team has garnered headlines for a less-than-celebratory reason but no less important: a gender discrimination suit against the United States Soccer Federation. Filed in federal court in March, the lawsuit covers 28 members of USWMT, is seeking class action status, and hopes to add in anyone who has played for U.S. Women’s Soccer since February 2015. Citing “institutionalized gender discrimination,” issue covered in the suit range from disparate pay, training conditions, medical treatment, and transportation versus the coverage and services provided by U.S. Soccer to the men’s team. Amid all this is veteran sports writer Caitlin Murray’s new book about the Women’s National Team, offering a deeper dive at both the conditions the players have endured in spite of their constant success, whether it being historic TV ratings, multiple World Cup and Olympic wins, and record revenue generated for U.S. Soccer and FIFA. A contributor and correspondent for The New York Times, ESPN, Fox Sports, and The Guardian, Murray conducted more than 100 exclusive interviews for this book, including with some of the team’s most beloved and famous players, such as Alex Morgan, Carli Lloyd, Brandi Chastain, and Hope Solo.

Ladies Who Punch: The Explosive Inside Story of The View by Ramin Setoodeh

CNN’s Brian Stelter already cracked the shiny veneer of network morning news programs with his 2013 book Top of The Morning. Now Variety’s New York bureau chief Ramin Setoodeh is here to do the same with the somewhat less shiny, but more puffed up veneer of late morning TV: specifically ABC’s long-running talk show The View. After going to air first in 1997 with an ever-revolving door of hosts since, there is no shortage of material for Setoodeh to draw upon, and it doesn’t hurt that most of the tea came directly from the ladies of The View themselves in interviews for this book—some of whom have said publicly since that they regret doing. Maybe that’s because they didn’t expect the book to explode the way it did since being published on April 2. If you’re hoping to save one book for a beach or airport read this summer, this would be it.

The Players Ball: A Genius, a Con Man, and the Secret History of the Internet’s Rise by David Kushner

Save Me the Plums: My Gourmet Memoir by Ruth Reichl

Whether it’s a New York Times review of a restaurant rated three stars by Michelin or even just a 240-character tweet, no one writes quite like Ruth Reichl. The beloved food writer—who has served as a critic at the Los Angeles Times and the New York Times and penned more than half a dozen books (memoirs, cookbooks, and a novel)—is now shining a light on a time in her career that fans might be most curious about: her tenure as the last editor of Gourmet magazine. When Condé Nast shuttered the venerated title in 2009, it shocked nearly everyone, from readers to restaurant managers to other members of the media. But as she has since admitted in interviews and details in Save Me the Plums, no one was more shocked—or broken-hearted—than Reichl herself. As someone who has read all of Reichl’s books to date (and routinely tunes in to watch her guest appearances on shows like Top Chef or interviews with various food media podcasts), I’d recommend anything Reichl writes—even if you’re not interested in food media—as her work has always been a true literary feast for the reader.

Caterers are often the most overlooked, and worse, poorly treated people at the party. Frankly, the way they’re treated often escalates based on how big or fancy the fête actually is. The Lee Brothers of South Carolina reveal much more than you could have imagined about what goes on behind the scenes in the catering business, which can be more wild than an event they’re serving. Dealing with early (and late) hours, tight budgets, demanding clients, extreme weather conditions—all while having to maintain a smile and a mantra of serving the customers. Catering can be a thankless job, but this book might make you reconsider how to conduct yourself next time you attend a catered event.

There are few in Tinseltown who have been written about as much as Audrey Hepburn. The actress and humanitarian has long captured the public’s fascination across generations, even long after her death in 1993. But a new book from documentary filmmaker and Hollywood biographer Robert Matzen takes a look at a specific period in Hepburn’s early life that few are familiar with: the five years she spent in the Nazi-occupied Holland during World War II. This latest Hepburn biography is strengthened through a number of interviews of those closest to the late star, including her sons Sean Ferrer and Luca Dotti. Among the harrowing and tragic incidents shared in the new book include details about her participation in the Dutch Resistance, working as a doctor’s assistant during the battle of Arnhem, the execution of her uncle, and the Dutch famine of 1944 and 1945.

Bitcoin Billionaires: A True Story of Genius, Betrayal, and Redemption by Ben Mezrich

Readers of 2009’s The Accidental Billionaires (or even viewers of the film adaptation The Social Network) might have thought that brothers Tyler and Cameron Winklevoss got a short shrift—both in what happened at Facebook and having a smaller slice of the narrative. Now author Ben Mezrich is back to give the entrepreneurial twins, colloquially known in the tech world as the “Winklevii,” the lead roles in a new book about their lives and work after the late-aughts legal battle with Mark Zuckerberg. Cryptocurrency followers should already be familiar with the pair’s digital currency fund as bitcoin has blown up and gone haywire over the last few years. But Mezrich’s account of their last decade is gripping from the opening pages, setting it up supremely to be optioned by Hollywood producers. The narrative flourishes can be a bit much from time to time, as Mezrich tends to go overboard in describing how even a basic San Francisco law office looks (“eggshell-colored walls and industrial-beige carpets”). And that’s just page one. Those distractions aside, Mezrich has produced another page-turner. And yes, while it is about a pair of tech bros who came already from a privileged background and have still become wildly successful, it’s hard to imagine this will be the last installment about the Winklevoss twins given the unpredictability of both the crypto markets as well as the brothers’ extreme ambition.