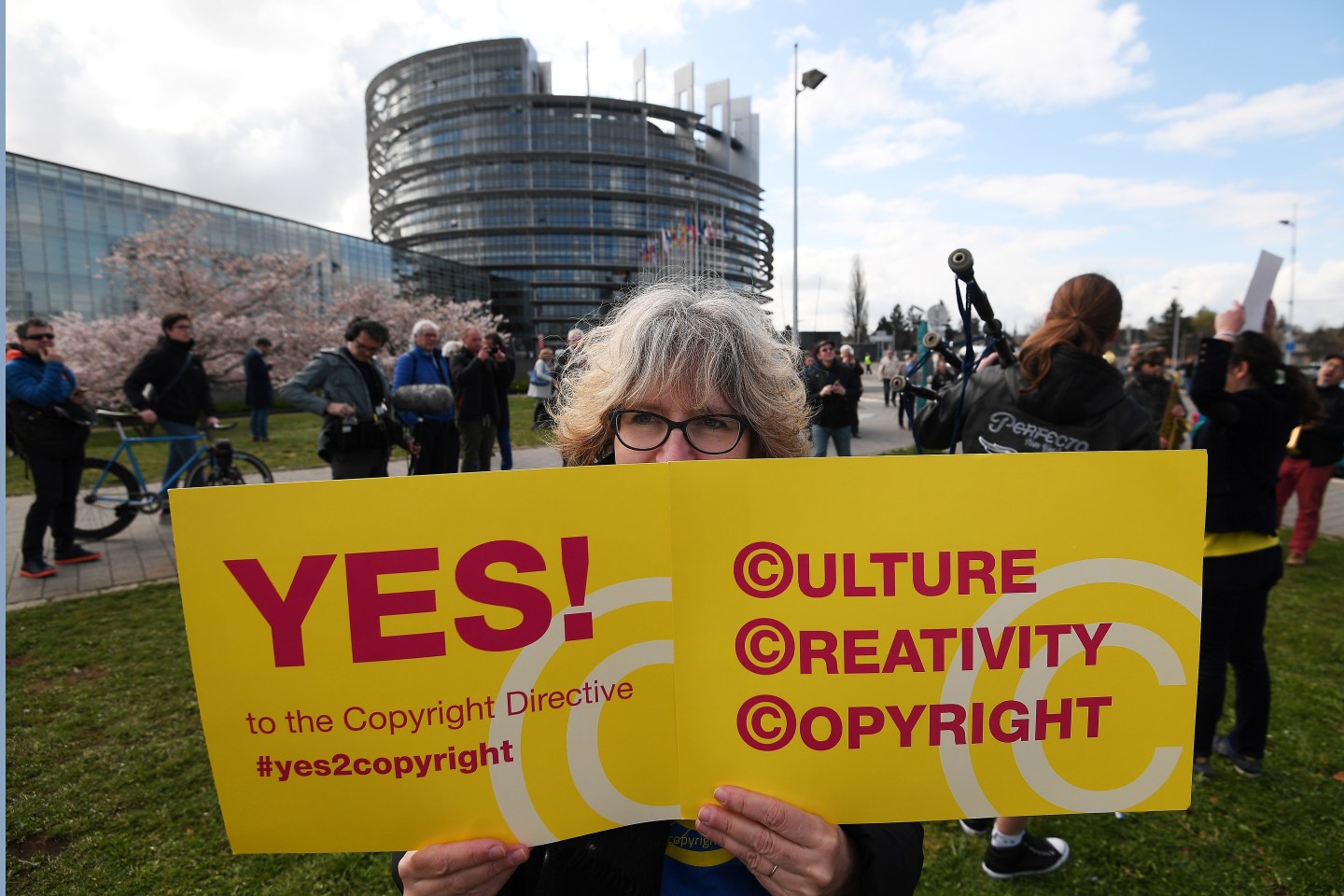 People take part in a demonstration in favour of the new copyright directive ahead of the vote on copyright in the Digital Single Market at the European Parliament on March 26, 2019 in Strasbourg, eastern France. (Photo by FREDERICK FLORIN/AFP/Getty Images)
Frederick Florin—AFP/Getty Images

The European Union will make online platforms liable for copyright infringements perpetrated by their users, in a move that will likely force all but the smallest platforms to install filters to spot potential infringements in the content uploaded to their sites.

The measure was cleared by the European Parliament on Tuesday, as it approved the first update to the EU’s copyright rules since the turn of the century by 348 votes to 274. This was the last vote on the Copyright Directive, which will now have to be implemented in the laws of each EU member state by 2021.

Digital rights campaigners bitterly fought against this part of the law, which is widely known as Article 13 although it was renamed as Article 17 of the Copyright Directive not long before the final vote.

Voting on individual amendments (like the proposal to delete #Article13) was rejected by a majority of just 5 votes. #SaveYourInternet pic.twitter.com/RprPoiH3dZ

Many players opposed Article 13—several Wikipedia sites went dark in protest last week; thousands of people marched against the measure in Germany; more than five million signed a petition against it; and the United Nations’ free-speech rapporteur, David Kaye, repeatedly warned that it would harm free expression. Technical experts warned that filtering technology is not yet mature enough to accurately spot copyright infringements without also blocking some legitimate uploads.

“Despite the warnings and concerns of academics, privacy bodies, U.N. representatives and hundreds of thousands of consumers across Europe, the European Parliament has given its go-ahead to a very unbalanced copyright law,” said Monique Goyens, director general of the European Consumer Organisation (BEUC.) “Consumers will have to bear the consequences of this decision. Their concerns had been voiced loud and clearly but MEPs chose to ignore them.”

Julia Reda, the Pirate Party MEP who spearheaded the fight against Article 13, told Fortune that the vote was “a severe blow to freedom of expression and diversity of voices online,” and the European Parliament had ignored expert advice. “The fact that the motion to amend the deal and possibly delete the most controversial upload filter provision was rejected by only 5 votes shows that the agreement remains extremely divisive,” she added.

Tech firms such as Google also campaigned against it, as did Mozilla, the maker of the Firefox browser.

“We fully expect copyright to return to the political stage. Until then we will do our best to minimize the negative impact of this law on Europeans’ internet experience and the ability of European companies to compete in the digital marketplace,” said Mozilla’s head of EU policy, Raegan MacDonald.

Google also had reason to oppose another contentious part of the new law: Article 15 (previously titled Article 11,) which introduces so-called ancillary copyright across the EU. This essentially means press publishers will be able to demand licensing fees when services such as Google News reproduce snippets of text from their articles.

The idea has been tried in both Spain and Germany before, and failed both times. In the case of Germany, where publishers such as Axel Springer lobbied for the law, Google responded by no longer reproducing snippets of their article text in its search results, rather than paying to do so. The publishers capitulated and allowed Google to reproduce their snippets without paying. In Spain, the ancillary copyright law forced publishers to demand payments, so Google shut down its News service there.

The new EU-wide law is closer to the German model than the Spanish. However, Google has repeatedly floated the idea of shuttering Google News across Europe if it passed.

Google said in a statement that the directive passed on Tuesday had been improved in its final staged but “will still lead to legal uncertainty and will hurt Europe’s creative and digital economies.”

“The details matter, and we look forward to working with policy makers, publishers, creators and rights holders as EU member states move to implement these new rules,” said a spokesperson.

The music industry was one sector reacting positively to the news. “This is a landmark day for Europe’s creators and citizens, and a significant step towards a fairer internet,” said Helen Smith, the head of the Independent Music Companies Association (Impala.) “Platforms facilitate a unique relationship between artists and fans, and this will be given a boost as a result of this directive. It will have a ripple effect world wide.”

There was so much interest in Tuesday’s vote that the European Parliament’s livestream kept collapsing. It was, ironically, only consistently viewable on YouTube.

On Monday, Germany’s FAZ newspaper reported that Germany and France struck a deal, under which the former would lend its support to the Copyright Directive if the latter supported a loophole in the new EU Gas Directive allowing the German-backed Nord Stream 2 gas pipeline to Russia to go ahead.