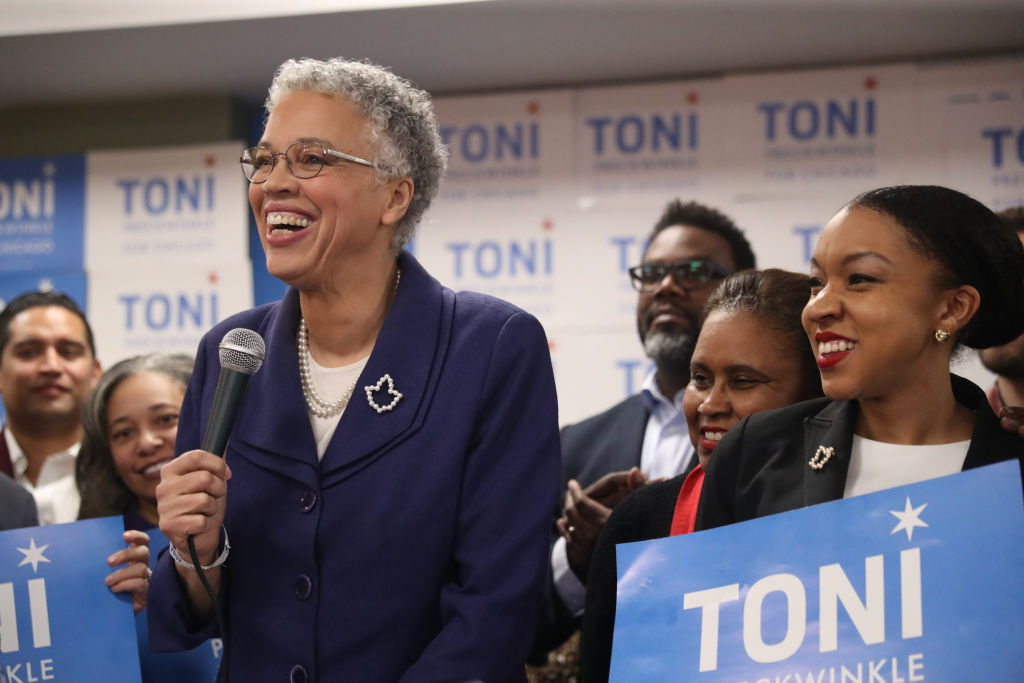 Chicago’s legendary Daley political machine failed to deliver victory in Tuesday’s mayoral election as Bill Daley conceded the race to two black women who will make history when one of them becomes mayor after an April runoff.

Former federal prosecutor Lori Lightfoot and Cook County Board President Toni Preckwinkle claimed the two top spots and Daley, the son and brother of two past Chicago mayors and a chief of staff to former President Barack Obama, finished third in a field of 14 candidates.

Chicago will now have a choice between two women, one of whom will become the first black female mayor of the nation’s third-largest city.

“This, my friends, is what change looks like,” Lightfoot told cheering supporters Tuesday night. She thanked those who decided to “stand with our campaign against the machine.”

The election returns seemed to reflect a move by the Democratic-dominated city to the left — like the rest of the party nationally — and Daley’s establishment background set up serious hurdles in his quest to add to the 43 years that his father and older brother ran the city.

The field of candidates to replace retiring Chicago Mayor Rahm Emanuel was the most-crowded mayoral ballot in the city’s history, assuring that no one would secure the 50 percent needed to avoid a runoff.

The winner on April 2 will inherit control of a city with deep social and financial problems, including a high murder rate, population decline and massive pension shortfalls.

The city’s four pensions are underfunded by a combined $28 billion. While Emanuel has taken steps to shore up the retirement system by raising property and utility taxes and boosting the city’s contributions, it hasn’t been enough. The pensions are still only 27 percent funded, and Chicago must come up with an additional $1 billion by 2023 to cover mandatory payments.

Lightfoot, who served as president of the Chicago Police Board and the city’s Police Accountability Task Force, has presented herself as an independent reformer who would challenge Chicago’s storied reputation for corruption. If elected, she would also be the city’s first openly gay mayor, which she alluded to in her election-night speech.

She announced her candidacy in May 2018, before Emanuel had dropped his bid for a third term. Lightfoot has been highly critical of the police department’s reform efforts in the wake of the 2014 fatal shooting of black teenager Laquan McDonald in a tragedy that attracted national attention and brought calls for Emanuel’s resignation.

Preckwinkle, who has strong backing from organized labor, told her supporters that “our fight is far from over and there is a lot more work to do,” adding that “history is being made.”

She immediately sought to undermine Lightfoot’s reformer credentials. “While my opponent was taking multiple appointments in both the Daley and Emanuel administrations, I fought the power elites who have been trying to hold this city back,” Preckwinkle said.

Daley, a one-time JPMorgan Chase & Co. executive who also was a Commerce Secretary under former President Bill Clinton, was by far the biggest campaign spender in the race. Daley’s family and business connections helped him raise nearly twice as much as Preckwinkle, the second-highest fundraiser. He pulled in at least $8.7 million, including $2 million alone from billionaire hedge fund founder Ken Griffin, according to records with the Illinois State Board of Elections.

He thanked Griffin as he conceded. “I’m here tonight with an outcome none of us had wanted, but because we respect the democratic process, we all must accept it and we will move on,” Daley said.

The race had been embroiled in recent weeks by fallout from a federal corruption charge leveled in January against Alderman Ed Burke, who was forced to resign his powerful post as Finance Committee chairman after prosecutors alleged he pressured executives of a fast-food restaurant chain to become clients of his tax-specialty law firm in exchange for a remodeling permit in his ward.

Several of those running for mayor have been tainted by ties to Burke, who has pleaded innocent. Preckwinkle has been the most closely linked to Burke. The federal complaint alleges he pressured company executives to donate $10,000 to an unnamed politician, later identified as Preckwinkle. He’d also held a fundraiser for her in his home during her campaign for county office.