On Trade, Trump and Alexandria Ocasio-Cortez Share Some Common Ground 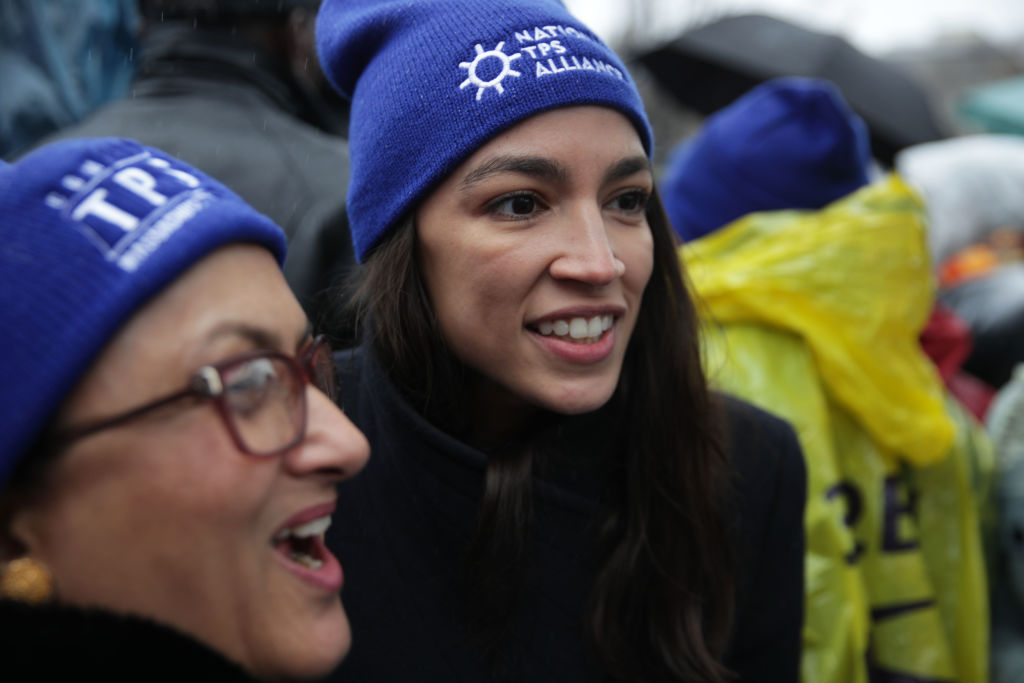 On the face of it, self-declared socialist Alexandria Ocasio-Cortez and Donald Trump have little in common when it comes to economic policy. He’s been cutting taxes. She wants the rich to pay more. He wants more coal-fired power plants. She has plans for a Green New Deal. And then there’s trade. Trump has lately taken to declaring himself the bulwark of American free enterprise against a socialist onslaught personified by the headline-grabbing phenomenon that is Ocasio-Cortez. But many analysts see an uncomfortable truth for the president.

On trade, Trump behaves more like a state-interventionist than a laissez-faire guy. And he has more in common with the New York congresswoman, who like many progressive Democrats argues for stronger trade rules to protect American jobs, than with the standard-bearers of his own Republican party.

Nobody’s arguing that Trump or his trade policy meet the dictionary definition of socialism, with its all-encompassing embrace of state planning. But what about a lite version, which demands a greater role for the state in managing trade flows and intervening in corporate decisions?

“It’s undoubtable that U.S. trade policy in the last two years has moved toward that type of socialism,’’ says Scott Lincicome, a scholar at the libertarian Cato Institute and one of the most voluble critics of Trump’s trade policy on social media. In his State of the Union address last week Trump declared that “America was founded on liberty and independence, and not government coercion, domination, and control.” That glossed over the coercion deployed by the president himself, and his trade hawks, in the name of fixing what they see as a broken international order.

Trump has harangued companies in a way few American presidents have matched, telling them to invest more in the U.S. and keep plants open instead of offshoring them.

He’s also reached deeper inside the boardroom than recent U.S. governments have been comfortable doing. Writ large, his trade war with China is designed in part to force corporations to rethink — and preferably repatriate — supply chains that run via America’s biggest economic rival.

Outside of protected industries like steel, big business has consistently dismissed Trump’s tariffs as an act of economic self-harm –- though its wider attitude to the trade talks isn’t always so clear-cut. Much as they bristle at intervention in their own affairs, many companies happily support the use of American state power to export strict intellectual property laws, and prise markets open.

It’s not just in America where Trump is carving out a bigger role for government. He’s effectively doing the same in China –- sometimes in the same breath as demanding the opposite.

In the current talks, for example, Trump is pushing for structural changes aimed at encouraging China to behave more like a market economy. But he’s also insisting on more Chinese purchases from America — everything from soybeans and natural gas to airplanes. That’s tantamount to a bigger role for the Chinese state, and the companies it owns -– which are among Trump’s targets.

“The level of hypocrisy is breathtaking,’’ says Mary Lovely, an economics professor at Syracuse University. Worse, “the Chinese have no trouble with that — because they’re a socialist market economy.’’

Trump’s micro-managing of trade flows extends far beyond China. South Korea evaded his steel tariffs last year by agreeing to an elaborate system of product-specific quotas, something Trump has been pushing other allies to sign up to as well.

New auto tariffs under consideration are designed to make foreign companies invest more in U.S. factories. European and Japanese officials privately express concerns that the administration wants to force them into strict quotas, which could be more burdensome and harder to unwind than tariffs. Or that the U.S. will insist on extending rules, like those included in the renegotiated Nafta, that mandate more production in North America and set specific wage requirements.

“We libertarians think everything’s socialist,’’ Lincicome says. But Trump’s accumulating record on trade amounts to “extensive economic planning,’’ he says. “It’s not what companies would do in an open-market situation.’’

‘Fight of Our Lifetime’

Even defenders of Trump’s broader strategy for the economy struggle with his approach to trade. Stephen Moore, a campaign adviser to the president and co-author of the book “Trumponomics,’’ says he’s repeatedly quarreled with Trump over steel and aluminum tariffs. “It’s just not good economic policy,’’ says Moore, though he’d prefer to label the president’s approach to trade as mercantilism rather than socialism.Either way, he’s willing to throw out the free-market playbook when it comes to dealing with China. “I’m all for that,’’ he says. “This is the fight of our lifetime, and we can’t afford to lose.’’

And Moore points out that, in his approach to China, Trump displays a healthy respect for some key capitalist metrics — which is why recent tremors among global investors, who fear an all-out trade war, have driven the president toward a deal.

Because Trump is like all good capitalists. “He likes a good stock market.’’