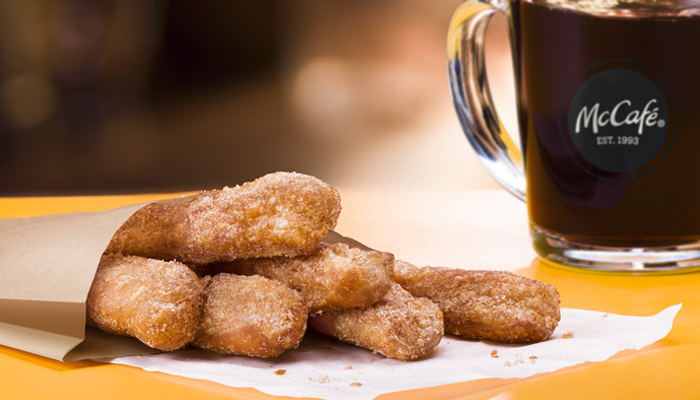 Someone wake up Grimace. It’s time to make the doughnuts.

McDonald’s is adding cinnamon sugar-dusted doughnut sticks to its breakfast menu, as it faces increased competition from other fast food chains. The long-rumored items will go on sale Feb. 20 for a limited time.

Technically called Donut Sticks, the addition is McDonald’s take on Dunkin’s popular “Donut Fries,” a limited-time menu item that made its debut at the competitor last July. Rumors about the menu addition began circulating toward the beginning of the year.

“We initially tested them in select Illinois restaurants in early 2018, and then again in October 2018,” said Linda VanGosen, McDonald’s vice president of menu innovation, in a statement. “We looked at several donut shapes, tested a variety of doughs and even worked to get the amount of cinnamon sugar just right for the recipe.”

McDonald’s success in the fast food breakfast arena has brought increased interest from a number of competitors, from Taco Bell to Whataburger. The company, in 2015, did away with limited hours for breakfast, offering everything from Egg McMuffins to pancakes all day. The move was even more popular than the chain had hoped, leading to it expanding its menu the following year.

Doughnuts are something new, though. The burger chain has largely steered clear of that menu item, given the strong position of Dunkin’, Krispy Kreme and others. Donut Sticks, for now, will be a limited time item, though if they boost breakfast sales (and coffee sales, a combination the company aggressively pitched several times in its announcement), it’s possible the company will make them either a recurring item (like the McRib) or a permanent one.