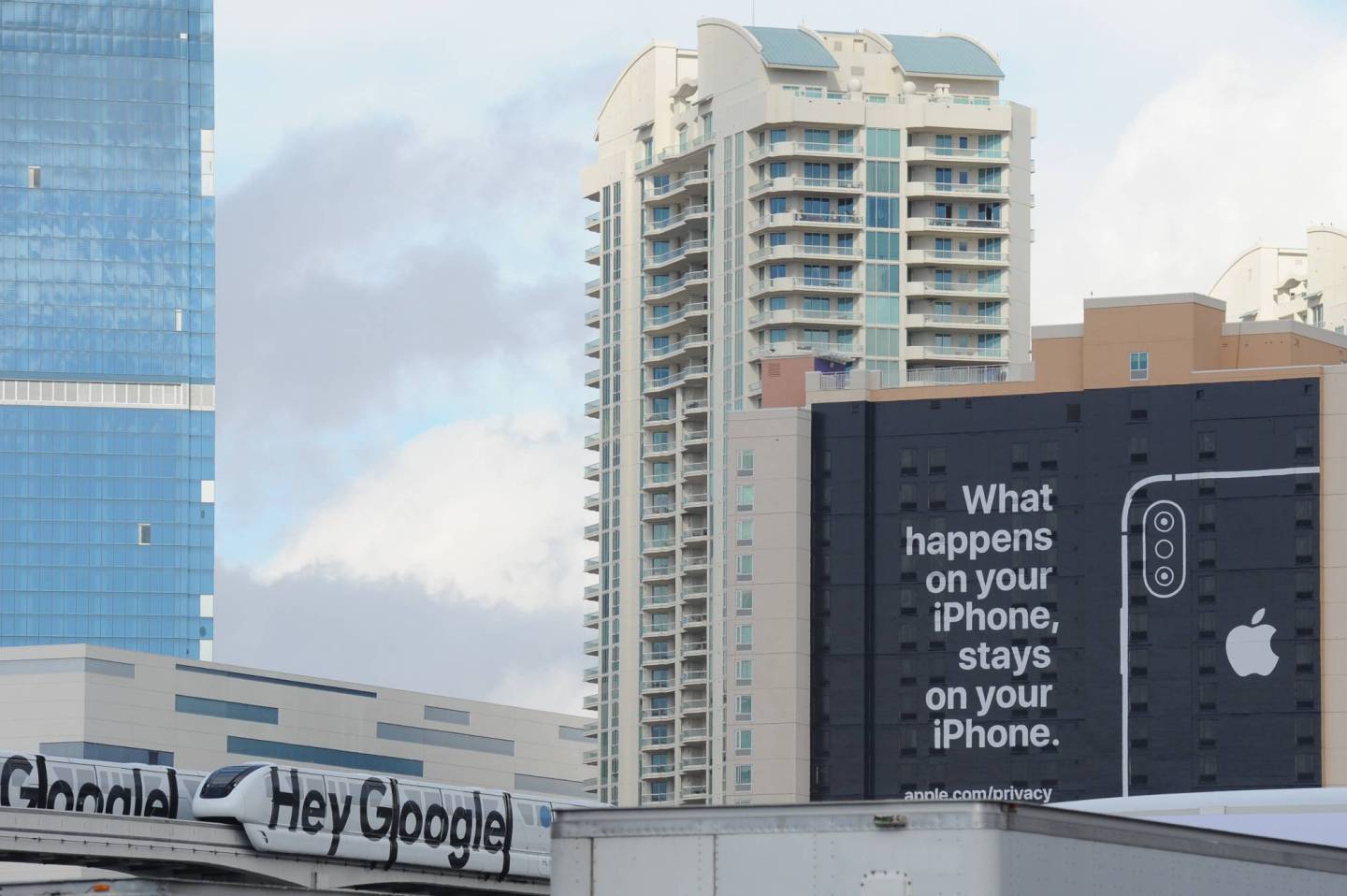 06 January 2019, US, Las Vegas: Monorain cars with the lettering "Hey Google" - the alarm word for the Internet company's language assistant - drive past an Apple banner advertising the protection of privacy on the iPhone. (to "Apple as CES fence guest with data protection advertisement" from 06.01.2019) Photo: Andrej Sokolow/dpa (Photo by Andrej Sokolow/picture alliance via Getty Images)
Andrej Sokolow—picture alliance via Getty Image

For students of Apple’s secretive ways, like me, the recent complaint filed in federal court in San Jose, Calif., against an Apple employee is like a decoder ring to a nonexistent text.

Apple is famously tight-lipped and zealous about ensuring its employees keep it that way. In my 2012 book I wrote about the lore inside the company that Apple security agents prowled a restaurant near headquarters, eavesdropping on employee conversation to make sure no one was dishing. It didn’t matter if the tales were true; workers thought twice before blabbing in public. I wrote about new-employee secrecy briefings, badges that worked only for doors employees were authorized to enter, and the anonymity that shrouded futuristic projects.

The criminal complaint filed Jan. 22 against a Chinese-born Apple employee named Jizhong Chen spells out in simple, declarative sentences the very secrecy techniques I’d only heard of before going through my reporting. Per the story we linked to on Thursday, Chen stands accused of stealing trade secrets from Apple’s hush-hush autonomous vehicle program known as Project Titan. Apple’s in-house investigators allegedly caught him taking photographs of his environs at Apple and also having stored sensitive documents on his personal computer.

To buttress its case of this employee’s alleged transgressions, the FBI agent spelling out the charges against Chen also details the lengths to which Apple goes to keep its secrets. The complaint explains Apple grants a limited set of employees “disclosure” on given projects, like the car initiative, and that an even smaller group of “core” employees have full access to project information. In the case of the auto project, just 5,000 of 140,000 Apple employees were disclosed on the project; only 1,200 were “core.” Chen was one.

Apple clearly has reasons for secrecy. The just-the-facts-ma’am nature of the document notes that Chen allegedly tried to peddle his Apple information to a Chinese competitor in hopes of getting a job there. The agent who wrote the complaint does not speculate if a company or a government sent Chen to Apple in the first place.

Wearing a different hat. After a seven-month search that felt a lot longer, Intel settled on a new CEO: former CFO and interim CEO Bob Swan. The seventh CEO in the chipmaker's five decade history, Swan is an outsider and a finance specialist at a company that has previously relied on deep insiders. Swan, after growing up as a kid in upstate New York, spent the first 15 years of his career rising through the ranks at GE. Let's hope Intel doesn't end up where GE is today.

Takes money to make money. On Wall Street, Amazon had great fourth quarter results but signaled it would spend more this year on warehouses and other infrastructure and warned of problems in India. That sent its stock price, up 20% over the past year, down 4% in premarket trading on Friday. In the fourth quarter, Amazon's sales rose 20% to $72.4 billion and profit of $6.04 per share was up 61%. Nintendo reported its revenue jumped 26% to $5.6 billion and profit increased 25% to $956 million last quarter. But it lowered expectations for 2019 sales of its Switch handheld game player to 17 million from 20 million.

Crunched. Cybersecurity researchers at Palo Alto Networks found a new exploit hackers could use to secretly mine digital currencies on target computers–and also steal passwords and other data. Dubbed CookieMiner, the attack affects Apple's Mac line of computers. “There is this fallacy that Macs can’t be compromised,” Jen Miller-Osborn, deputy director of threat intelligence, tells Fortune.

Back in play. The imbroglio over misuse of Apple's developer app platform widened on Thursday. After banning Facebook, Apple also withdrew Google's ability to use the channel meant to distribute apps to a company's own employees. But by the end of the day, Apple restored the rights. Both digital ad giants were using the platform to distribute to regular users special apps that likely didn't meet Apple's regular app store privacy rules.

Hoofing it. Heading top Barcelona in a few weeks, as I am, for the Mobile World Congress? A foolish rule imposed by the regional Catalan government there at the behest of taxi drivers has just prompted Uber to suspend service in the city. The rule mandates at least a 15-minute delay between a passenger booking a ride and being picked up. Back in America, Lyft and Juno filed a lawsuit challenging New York City's first-in-the-nation minimum wage for ride-sharing drivers (set at $17.22 per hour after expenses).

Throttled by the law. Supporters of the 2015 net neutrality rules repealed by the Trump administration's FCC get their day in court today. A three judge panel of the D.C. Court of Appeals hears arguments in the case, Mozilla Corp. v. FCC. You can listen in to the expected three hour debate starting at 9:30 a.m. ET.

If I told you, I'd have to kill you. Secretive security and data analytics startup Palantir is offering more generous bonuses and cutting the exercise price of employee stock options as it seeks to improve morale and retain top talent heading into an expected initial public offering later this year, Bloomberg reports.

As I.P.O. Approaches, Lyft’s Chief Is Nudged Into the Spotlight (New York Times)
When Logan Green, chief executive of the ride-hailing service Lyft, was asked which tech leaders he admired, he pointed to three men who had built their companies ruthlessly: Elon Musk, Mark Zuckerberg and Jeff Bezos.

How a Group of Daring Bootleggers Created NASCAR (Atlas Obscura)
While the story, like many family legends, is difficult to verify, it fits with many other accounts. The almost-friendly rivalry between cops and bootleggers was such that the Atlanta police were quoted as calling moonshiner Roy Hall a “genius at the wheel” because of his ability to outrun the law.

The Inevitable Aging of the Internet’s Famous Pets (The Atlantic)
How do owners—and fans—cope with celebrity animals’ later years?

So many great shows to watch, so little time–that's the entertainment dilemma of our day. And the problem's only going to get worse in 2019, with Apple, Disney, Comcast, and AT&T's WarnerMedia all prepping new services (frankly, I'm most excited about the Criterion Collection's upcoming plans). Elizabeth Winkler takes the lay of the land for the Wall Street Journal and sees a world where the different players have very different incentives. Take Comcast, for example:

For Comcast, however, the game isn’t only about trying to grab a slice of the streaming pie. Though Comcast is losing pay-TV customers, its internet business is booming. The streaming craze has made high-speed internet all the more valuable. But as Netflix and others raise prices, they put pressure on Comcast’s ability to raise prices in its broadband business, says Barry Nalebuff, professor of management at Yale University. Consumers will shell out only so much to be entertained. What better way to create price competition than launching a free streaming service?

What Is a Deepfake? Let This Unsettling Video of Jennifer Lawrence With Steve Buscemi’s Face Show You By Kevin Kelleher

How Quitting Facebook Could Change Your Life By Erin Corbett

There's a big football game or something coming up on Sunday night, though it's getting a bit blase for we New Englanders (maybe I should have made a bet with our Los Angeles-based editor Andrew Nusca). But those Super Bowl commercials? That's more enticing to me. Smithsonian has a great run down on the history of the Super Bowl ad spot. See how many you remember, including Apple's famous hammer throw.