I’ll Say It: Howard Schultz Running for President as an Independent Is a Good Idea 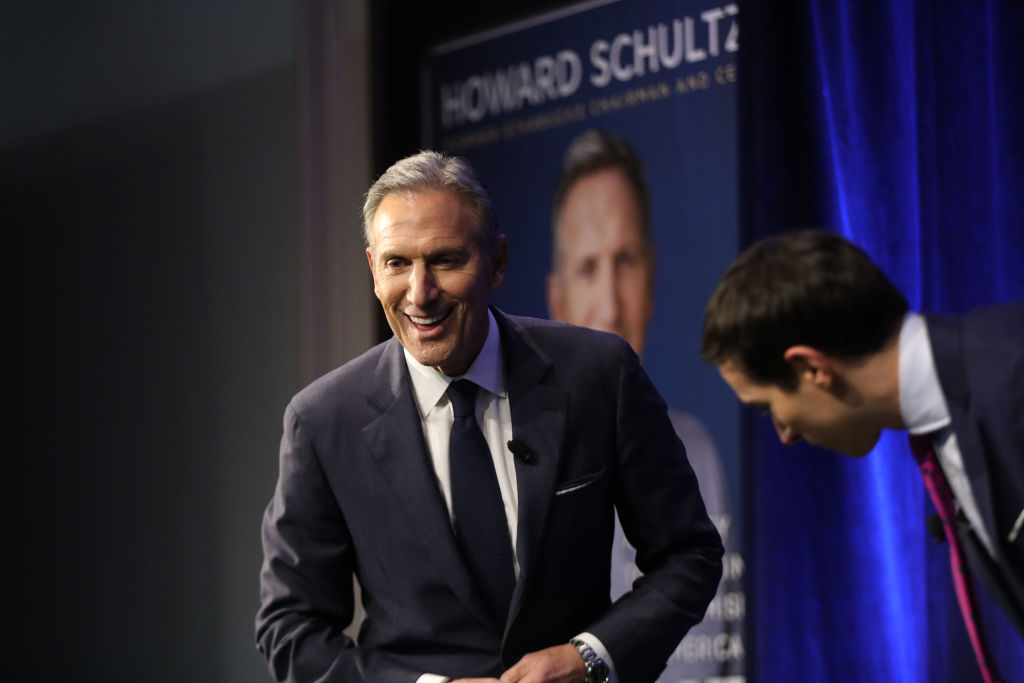 NEW YORK, NEW YORK - JANUARY 28: Howard Schultz, the billionaire former Starbucks CEO, speaks at a Barnes and Noble bookstore about his new book "From the Ground Up" on January 28, 2019 in New York City. Schultz said on Sunday in a "60 Minutes" interview that he is considering running for president in 2020 as a centrist independent. (Photo by Spencer Platt/Getty Images)
Spencer Platt—Getty Images

Should former Starbucks CEO Howard Schultz run for president as an independent? I’ve been stunned by the backlash this idea has gotten in the last three days. Everyone seems to be against it—not just liberals who fear he will be a “spoiler,” but also conservatives who dislike the leftward tilt of his centrism. Hecklers are haunting his book tour. Journalist Peter Goodman tweeted: “If there is a single person on planet earth who thinks Howard Schultz running for President is wonderful, they are keeping it well hidden.”

So let me step forward: I think it’s a good idea. Why? Not because running a string of coffee houses prepares you any better for the presidency than, say, building condominium complexes. And not because Schultz’s approach to solving our nation’s growing social divide (Talk to your barista!) is any more effective than President Trump’s (Close the borders!).

No, I think it’s a good idea because someone needs to challenge the two-party stranglehold on American politics. America’s biggest business competitiveness problem is its broken political system. As Harvard business professor Michael Porter and Katherine Gehl argued in this piece in Fortune, the two parties act like a classic duopoly, serving their own needs but not those of the country.

Could he become a spoiler, as Ross Perot was in 1992? That’s a question that doesn’t have to be confronted until post-Labor Day 2020. In the meantime, having an articulate businessperson making the case for a centrist political movement can only be a good thing. Businesspeople like to fix problems—problems that don’t seem to concern most politicians these days.

Moreover, there are signs that the country is—if not ready for it—moving in this direction. Nearly 40% of Americans identify as Independent, and while most of them consistently vote with one party or the other, their rejection of a party label is telling. Another encouraging data point: in the last election, voters in three states—Colorado, Michigan and Missouri—passed ballot measures to end partisan redistricting.

So my message to Schultz—or for that matter, anyone else considering an Independent run—is: go for it. A GOP wise man once told me that politics is a lot like golf—it generally works best if you stay near the center of the fairway. Today, most of the players are in the rough.