Why Politics Is Failing America 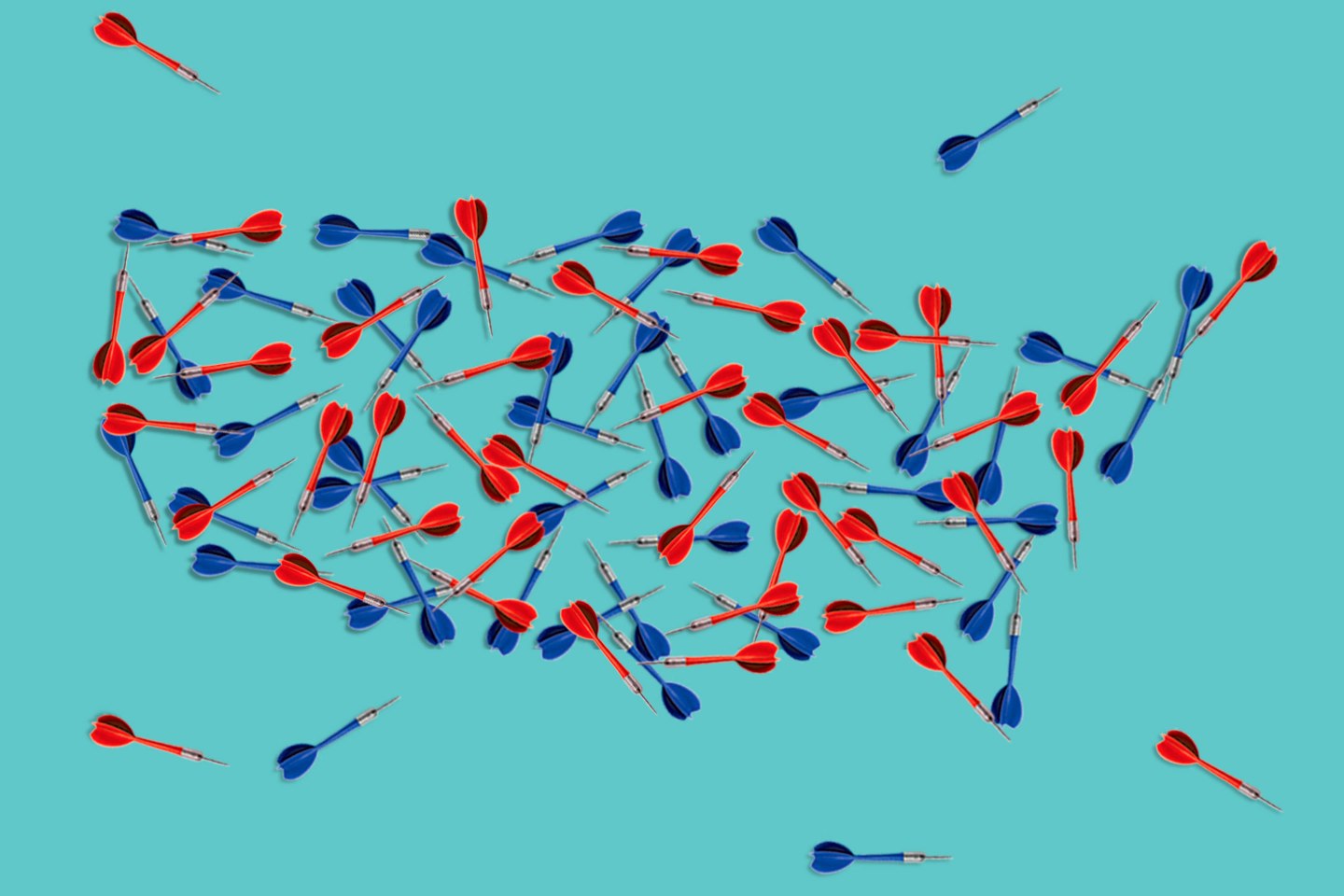 Beware the political–industrial complex. They rig the game for their benefit. The public interest is the loser. Here’s how to fix it.

By nearly every measure, America’s political industry is thriving. Campaigns are now seemingly endless and put to work an immense roster of canvassers, pollsters, and staff; top consultants are in high demand; media interest is bottomless; and when it comes to elections, overall spending (a normal proxy for an industry’s success) is near an all-time high.

There’s just one problem. The people who are supposed to benefit from this booming enterprise—the American public—have never been more dissatisfied. The share of Americans who say they have at least a “fair amount of trust in political leaders” hit its nadir last September, according to Gallup. And in February, nearly one-fifth of Americans (19%) said dissatisfaction with government was the single biggest problem the country faced. By contrast, just 9% of those surveyed by Gallup felt “the economy” was America’s most pressing concern.

Why is the political-industrial complex flourishing while its customers are less satisfied than ever? To answer that question, we’ve applied the tools of business analysis to American politics. Our conclusion: U.S. politics is an industry—a duopoly that’s about as anticompetitive as you’re likely to find these days. The result, as a prominent 2014 study by Princeton’s ­Martin Gilens and Northwestern’s Benjamin Page shows, is that the preferences of the average voter have a near-zero impact on public policy.

It wasn’t always that way. America’s political system was long the envy of the world. The system advanced the public interest and gave rise to a grand history of policy innovations. Today, however, it serves as only a barrier to solving nearly every important challenge our nation needs to address.

The Harvard Business School’s project on U.S. competitiveness found that Washington has made virtually no progress on any of the essential policy steps needed to restore prosperity and growth. A broken political system has suddenly become the greatest threat to our nation’s future.

So how did we get here? In part, by stealth. Over the last several decades, the American political system has been slowly reconfigured to serve not the public interest, but rather the interest of private, gain-seeking organizations: our major political parties and their industry allies. These players have put in place a set of rules and practices that, while largely unnoticed by the average citizen, have enhanced their power and diminished our democracy.

Indeed, America’s current political system would be unrecognizable to our founders. Many of its day-to-day components have no basis whatsoever in the Constitution—which offers no mention of political parties, party primaries, caucuses, ballot access rules, segregated congressional cloakrooms, party-determined committee assignments, filibuster rules, and countless other practices that drive today’s dysfunction. John Adams, our second President and one of the most astute thinkers among America’s founders, even warned the upstart nation against slipping into a duopoly, saying, “There is nothing which I dread so much as a division of the republic into two great parties, each arranged under its leader, and concerting measures in opposition to each other.”

But that, of course, is precisely how things stand now. And the key to fixing it is to first see our political system as the multibillion-dollar industry it is—a business with significant economic benefits for its participants.

At its center, as we said, is the duopoly: the two major parties. Around them has arisen what we call the political-industrial complex—an interconnected set of entities that participate in and support the industry: special interests, lobbyists, pollsters, consultants, partisan think tanks, super PACs, and, yes, the media too. Virtually all the industry players are connected to one side or the other—the right or the left.

Competition in politics appears intense—­witness the numerous candidates, sky-high spending, and minute-to-minute media coverage. And as any student of economics will tell you, competition is typically good for customers. But not here. That’s because the competition to win elections is on the wrong things. And both elections and governing involve an anticompetitive collusion of interests. Hence, the key customers of this industry—the special interests and donors—are largely protected by power brokers on both sides. Increasingly, political competition is designed not to advance the public interest, but rather to cultivate loyal funding sources and motivate partisan primary voters.

Critical suppliers to the industry, such as campaign consultants, pollsters and data gurus, fundraisers, legislative staff, and many think tanks, are closely aligned with the duopoly. So, too, are our television sets divided in two, with brigades of channels reinforcing each side’s viewpoints.

Independent candidates face huge challenges in securing the funding and professional infrastructure needed for a modern campaign. (Any challenger outside this two-party system would have a hard time even getting on a debate stage.)

And this is where America’s politics seem to break the economic rules: After all, widespread customer dissatisfaction ought to encourage new competition in the marketplace. But in the industry of American politics, there are virtually no upstart entrants. No significant new party has emerged in the U.S. in over a century.

The parties have rigged the electoral process to guarantee division and disincentivize problem solving and progress. Partisan gerrymandering and primaries together are crucial to this structure. A legislator from a gerrymandered district must cater to the partisan primary voters from his or her own party, not answer to the general-election voters, much less to citizens overall or to the public interest. In a party primary in which partisans cast most of the votes, those with moderate views are an endangered species. And a legislator who pursues compromise may be punished by more extreme partisan activists fielding a challenger further to the left or right in the next primary. Moderation has become mere fodder for political attack ads; moderate legislators are a dying breed. There is no more compromise.

The net result is that the duopoly competes to divide citizens, not deliver solutions.

And while the evidence may be strong that this entrenched two-party system has blocked new competitors, artificially restricted and narrowed voter choice, and colluded to set rules that ensure their near-total market share, antitrust regulators aren’t likely to break it up. (Unfortunately, antitrust statutes don’t apply to politics.)

That said, there are good, practical ideas for political reform that will help citizens retake control of their political system. Here, a brief playbook:

Institute nonpartisan primaries. The current primary system shifts campaigns (and governance) toward the extremes. But opening up primaries to all citizens would force all candidates to appeal to a general electorate, rather than just the far left or far right of their party. Under a nonpartisan system, there would be one primary that included all candidates no matter their affiliation. The top two vote-getters—or better yet, the top four—would then advance to the general election.

Institute nonpartisan redistricting. Gerrymandering is the process of drawing legislative district boundaries that create a strong artificial advantage for the party in control. It reduces competitive seats, leads to extreme candidates, and minimizes accountability of elected officials. This has to change.

Don’t let private parties control the House and Senate rules. Partisan control over day-to-day legislating and governance must be significantly reduced. If rules and practices that block compromise and collaboration are eliminated, it will be much easier to have an open, bipartisan discussion about the legislative fixes the country needs.

Reduce barriers to entry for independent candidates. In this rabid partisan atmosphere, it won’t be easy recruiting qualified and talented independent and moderate candidates to run for office. But to encourage this, we must first build an election and financing infrastructure that begins to level the playing field.

Embrace the Senate Fulcrum Strategy. A relatively fast, efficient, and effective way to help break the current political gridlock is to elect three to five centrist independent U.S. senators with a problem-solving mind-set and agenda. They can act as a swing coalition that potentially denies either party a majority and force change from the center (see centristproject.org for details).

Some of these steps are already starting to gain traction. California and Washington have instituted nonpartisan primaries. Recent court rulings against partisan gerrymandering are a promising start as well. And groups are forming to support moderates and independent candidates. But taking back our political system will require a large-scale, sustained effort, including significant political philanthropy. We call on the business community—which understands how fundamentally important competition is—to help restore healthy competition to advance the public interest in American politics.

Donald Trump capitalized on the deep dissatisfaction with Washington to get elected President in a campaign marked by extreme divisiveness. Yet Trump could not have won without being part of the duopoly. The industry structure has not changed, and it needs to. It’s time to restore our democracy. Our competitiveness—and the future of all Americans—depends on it.

Katherine M. Gehl is the former president and CEO of Gehl Foods as well as a political innovation activist and speaker. Michael E. Porter, professor at Harvard Business School, is a competition and strategy expert. They will release a full report on this topic in April (see www.hbs.edu/competitiveness).

A version of this article appears in the March 15, 2017 issue of Fortune.