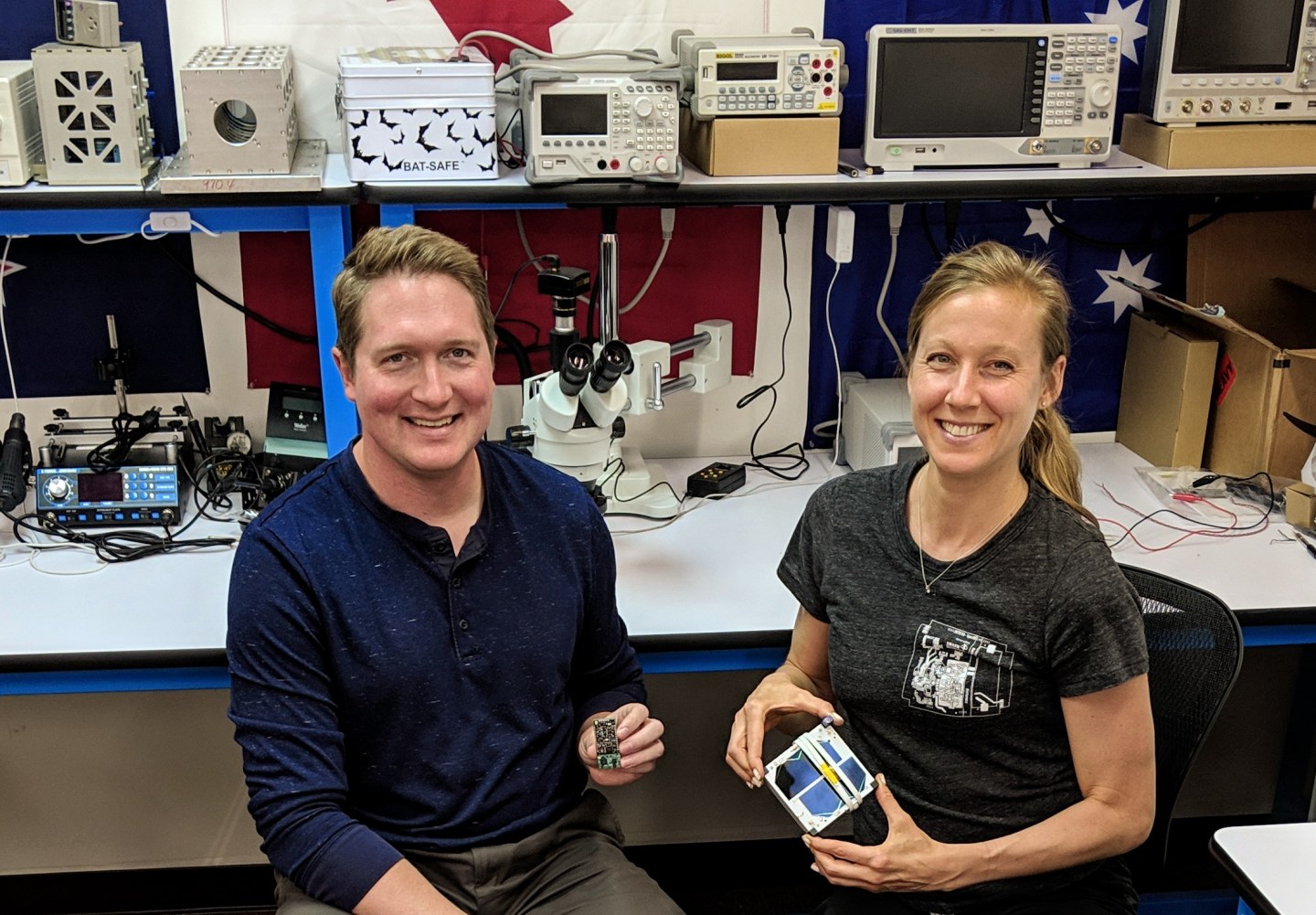 As a child, Sara Spangelo dreamed of being an astronaut, attended space camp, and even made it to the final 32 candidates in the Canadian space program before being cut two years ago.

But Spangelo, an aerospace engineer who has worked at NASA’s Jet Propulsion Lab and Google’s experimental arm, X, only had to shift her dreams slightly. Now the CEO of satellite startup Swarm Technologies, she has convinced two well-known entrepreneurs to lead a $25 million investment in her company: Earthlink founder Sky Dayton and PayPal co-founder David Sacks through his firm, Craft Ventures. Social Capital, 4DX Ventures, and NJF Capital also invested.

The Series A money will help Spangelo along with co-founder and Apple veteran Ben Longmier launch 150 of the smallest satellites ever made with a goal of providing Internet connectivity anywhere on earth within two years.

The fast-growing field of small satellite startups is racing to capitalize on the parallel trends of plunging launch costs and cheap miniature satellites. But while big rivals like Elon Musk’s Starlink and Masayoshi Son’s OneWeb and smaller competitors like Astranis and Sky and Space plan to launch satellites the size of washing machines to toasters, Swarm’s super-small “SpaceBEES” are closer to the size of a grilled cheese sandwich, at 4 inches by 4 inches by 1 inch.

And rival satellites cost millions of dollars or more to build and launch compared to just thousands of dollars for Swarm’s craft. At the other end of the spectrum, two traditional broadband Internet satellites, each the size of a school bus, being built by Viasat will cost $1.2 billion or more.

“You do the math and we don’t need to launch that many times to get this global constellation up,” Spangelo tells Fortune. “It’s a completely different way of doing satellite communication that is way more affordable relative to the existing players and even to our emerging competitors, mainly because our satellites are just so small.”

That also sets Swarm far apart from the 1990s startups like Iridium, the Bill Gates-backed Teledesic, and Globalstar that lost billions of dollars and ultimately ended up in bankruptcy.

And that’s what helped convince Dayton to invest in Swarm. “I had always avoided the satellite space, because it’s traditionally required a billion dollar investment followed by 10 years to find out if you were right,” he says. “Swarm’s approach reminds me of the early years at EarthLink—stay super scrappy, serve customers and generate revenue quickly.” That will let Swarm “continuously learn and iterate on the product to make it better and better,” he explains.

Seven of Swarm’s tiny SpaceBEEs are already in space, including three that were launched at the end of 2017 without permission from the Federal Communications Commission, which oversees the market for U.S. companies. Spangelo has said she won’t repeat the mistake after her company was fined almost $1 million.

The big breakthrough that allows Swarm’s satellite to be so small is how they maneuver in space. There are no thrusters or jets on the SpaceBEEs. Instead, they passively surf on the countervailing forces of the Earth’s magnetic field, the sun’s solar radiation, various gravitational pulls, and the drag of the atmosphere. In a sense, while other craft are like motor boats on a lake, Swarm’s satellites are more like sail boats.

However, the tiny satellites likely won’t last as long as larger competitors and can’t provide high-speed links for web surfing or video streaming like larger satellites from rivals. (Viasat (VSAT) says its two new massive satellites will provide twice the capacity of all 400 communications satellites currently in orbit).

Instead, Swarm aims to offer slower low-cost connections that will be suitable for tracking shipping containers at sea or providing emergency messaging service to people beyond the reach of cell phone networks. The company has already announced one partnership with Ford Motors (F) to provide emergency roadside connections for cars.

With the growing Internet of things movement that is adding connectivity and microprocessors to everything from agricultural water sensors to fishing buoys, the opportunity is vast, says Sacks, who also co-founded messaging service Yammer and is a lead investor in scooter startup Bird.

With its seven working satellites and funding for the entire constellation, Swarm is “further along than anyone else” among the new breed of small satellite startups, Sacks argues. “The ability to connect any device easily and cheaply, anywhere in the world is transformational—it’s never existed before.”