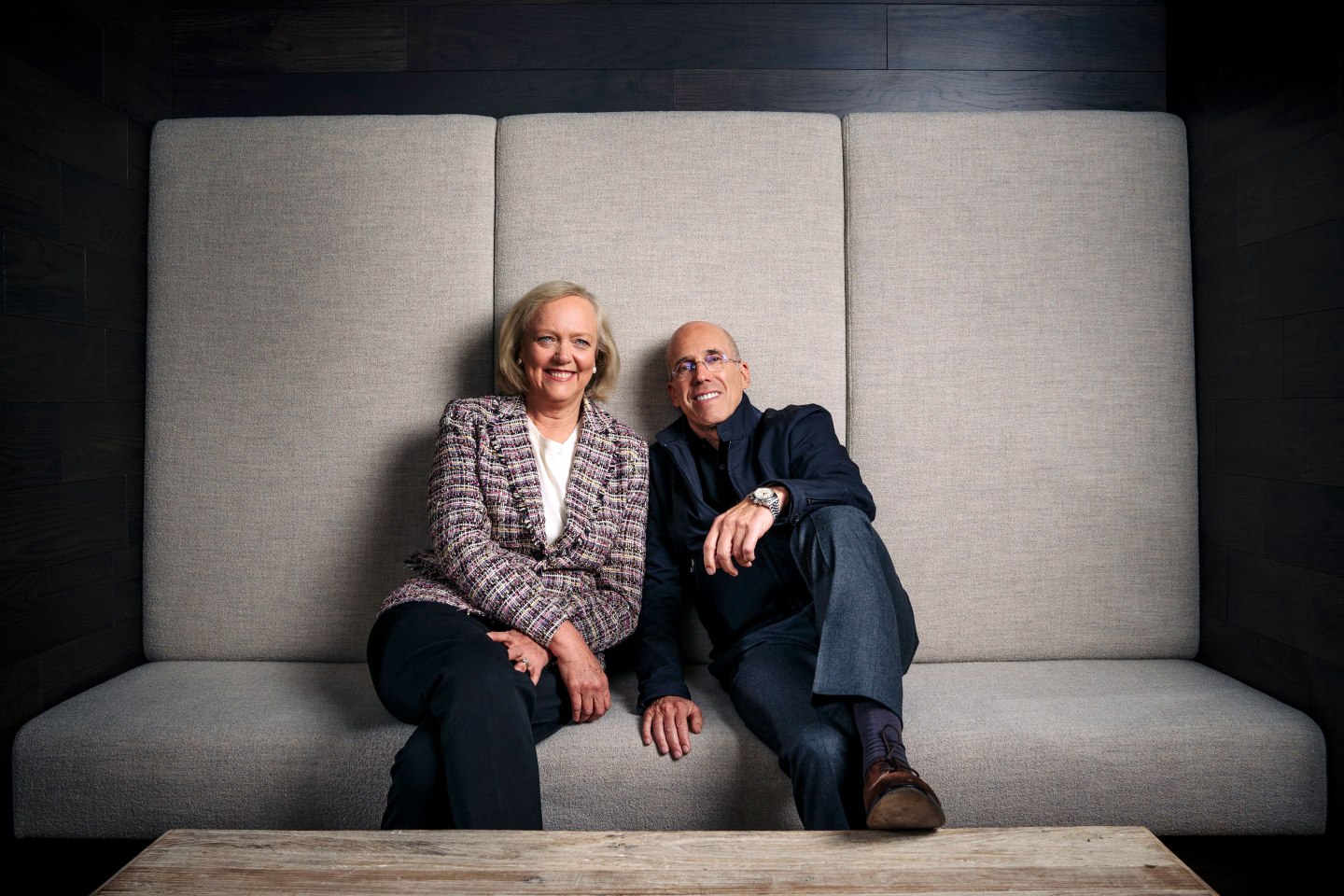 Photograph by Brinson + Banks for Fortune

If this all piques your interest, I highly recommend the snappily written feature on Quibi in the current issue of Fortune by Sheila Marikar. The article is enlightening on multiple levels. It features a pair of highly accomplished sexagenerians “hustling like interns,” in Marikar’s well-turned phrase, trying to create a youth-focused approach to video storytelling.

Quibi’s success is by no means assured. It has lured the major film studios as investors, greasing the wheels of commerce to gain access to creative talent. But it’ll be a leap of faith to see if young people will pay to subscribe to Quibi’s service, due out later this year.

Speaking of Davos, last year I rapped Facebook on the knuckles for hosting an off-the-record party for journalists, featuring a speech by Sheryl Sandberg, the company’s now-even-more-embattled chief operating officer. “It’s telling that the company most closely associated with publishing fake news and that doesn’t want to be thought of as a media company hosted an event for journalists but wouldn’t let them write about it,” I wrote last year. Tonight in Davos Facebook will once again host a soiree “for our news, media, and publishing partners” at its expensive digs on the Swiss town’s main drag, hosted by Sandberg as well as the company’s new head of “global affairs and communications,” Nick Clegg, formerly Britain’s deputy prime minister. Another host is the notable political diversity hire on the Facebook management team, former Republican operative Joel Kaplan, the company’s vice-president of global public policy. As for what will be said at the party, “kindly be aware the evening is off the record,” reads the invitation.

Setting a good example. A day after giving you some under and overrated CEOs, Fortune is back with our list of the most admired companies. Good onya' Tim Cook.

The war is over. Tap and pay via your mobile device is coming to Taco Bell and, perhaps more significantly, to all 1,850 Target stores, Apple announced on Tuesday. Target was famously a hold out when Apple introduced paying via iPhone in 2014, but it and other large retailers' plans to launch their own mobile payments network fell flat.

You're gonna be popular. Schools around the world continue to turn to Google for low-cost hardware and software. Google disclosed on Tuesday that it has 80 million education users for its G Suite, 40 million users on its Classroom platform, and 30 million Chromebooks being used in schools.

Delays in the air. Newark's airport was closed for 30 minutes on Tuesday after a rogue drone was spotted flying too close to its flight paths.

Court battle. The Department of Labor on Tuesday amended its 2017 lawsuit against Oracle, alleging the software giant underpaid female, black, and Asian employees by $400 million. “Suppression of pay for its non-White, non-male employees is so extreme that it persists and gets worse over long careers,” the department's lawyers wrote. Oracle has previously denied the charges and declined to comment on Tuesday.

Impressing with less. On Wall Street, IBM kicked off the tech earning season with a bang. Though revenue decreased 3% in the fourth quarter to $21.8 billion, that was better than analysts expected. Adjusted earnings per share of $4.87 were likewise down 5%, but better than forecast. IBM shares, down 21% over the past year, gained 7% in premarket trading on Wednesday.

Among the lessons of 2018, we learned (or maybe re-learned) that online ratings and polls can be manipulated pretty easily. In the latest dispatch from the land of fake reviews, Rolfe Winkler and Andrea Fuller at the Wall Street Journal investigate how companies try to boost their ratings on Glassdoor. A huge spike in reviews posted in October, just before Glassdoor releases its annual rankings, tipped the pair off.

An analysis of millions of anonymous reviews posted on Glassdoor’s site identified more than 400 companies with unusually large single-month increases in reviews. Some companies, including Elon Musk’s rocket company Space Exploration Technologies Corp. and software giant SAP SE, have had multiple spikes. During the vast majority of these surges, the ratings were disproportionately positive compared with the surrounding months, the Journal’s analysis shows.

Mining on the Moon: Europe Plans to Drill for Oxygen and Water By 2025 By David Meyer

You probably should not watch it with your kids—my teenagers cringed when the possibility came up—but Netflix's new show Sex Education is dazzlingly good, and with a killer soundtrack, too. Asa Butterfield stars as a high schooler who gives brilliant relationship advice, thanks to the influence of his therapist mom, played by Gillian Anderson. It is quite graphic, however, in its depiction of teen romance.