Americans Expected to Spend More Than Ever Before This Cyber Monday 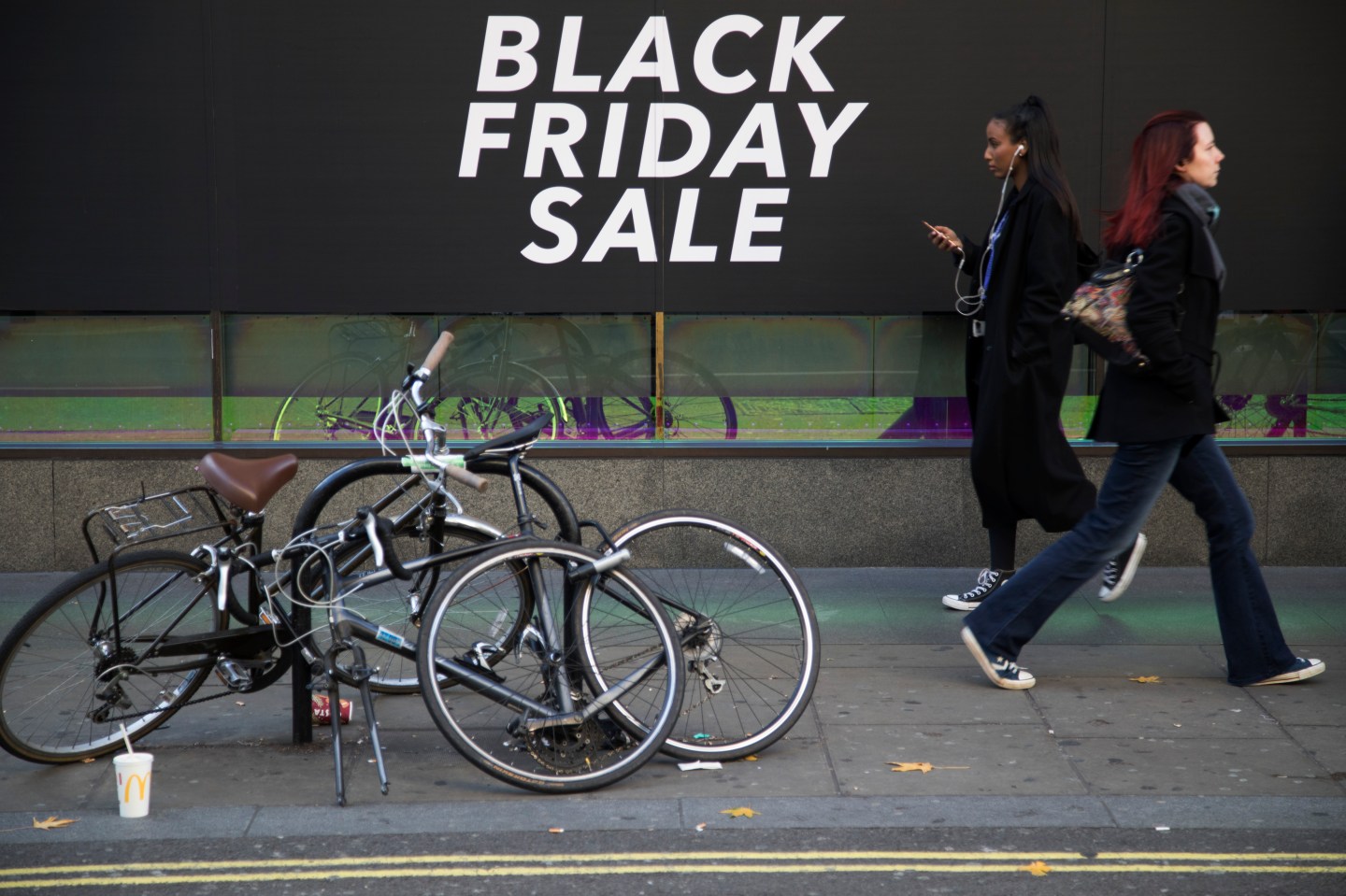 Shoppers on Oxford Street in central London with a sign advertising Black Friday in a shop window on 25th November 2017 in London, England, United Kingdom. This is the busiest shopping district in the capital with Oxford Street being Europe's busiest shopping area. (photo by Mike Kemp/In Pictures via Getty Images)
Mike Kemp In Pictures via Getty Images

Even before the turkey (or Tofurky) is cooked, Americans are opening their wallets for the holidays.

More than 164 million U.S. consumers will shop over Thanksgiving weekend, with the majority planning to make their purchases on Black Friday, according to the National Retail Federation.

While 71% of those surveyed by the NRF will turn out for the shopping “Super Bowl,” Black Friday is becoming less and less crucial to retailers as sales stretch beyond Thanksgiving week and more consumers opt to make their purchases online rather than fight the deal-hunting crowds in person.

In 2015, more Americans shopped online than in stores the day after Thanksgiving for the first time, according to the NRF. This year, 37% of consumers surveyed in a Reuters/Ipsos poll said they planned to do all or most of their Black Friday shopping on the web, compared to just 16% who reported plans to primarily shop in brick-and-mortar stores.

Sales on both Black Friday and Cyber Monday are expected to grow this year, bringing in an estimated $5.9 billion and $7.8 billion respectively, according to Adobe Analytics.

Cyber Monday is the largest and fastest-growing online shopping day in the U.S. and is predicted to see a 17.6% increase in sales in 2018 (though China’s Nov. 11 Singles Day dwarfs the entire shopping weekend as the largest global ecommerce holiday, bringing in nearly $31 billion in sales this year).

Throughout the holiday season, Americans will spend more than 1 in 6 of their shopping dollars online, and total ecommerce purchases are projected to reach $124.1 billion—a 14.8% increase compared to just 2.7% growth in offline retail sales, according to Adobe.

Last year older millennials (25-34 years old) were the biggest purchasers, spending $419.52 each on average between Thanksgiving Day and Cyber Monday compared to an average of $335.47 per person for all shoppers, according to the NRF.

“This holiday season retailers will experience the growing purchasing power of Gen Z and millennials,” NRF President and CEO Matthew Shay said. “Whether they are still in college or raising children, these consumer groups embrace the tradition of prior generations and take full advantage of Thanksgiving weekend deals both online and in stores.”

Half of consumers surveyed by the NRF planned to shop via their smartphones or tablets this year and 40% of all purchases in November and December 2017 were made on mobile devices—a number that’s expected to rise this holiday season.

But the increasing popularity of digital shopping doesn’t mean younger consumers will ever forego storefronts entirely over the holiday weekend.

“People shop because that’s what they’ve always done,” Kit Yarrow, a consumer psychologist at Golden Gate University told Popular Science about the mindset behind Thanksgiving week shopping. “There’s a huge element of tradition. Some people have truly done this every year since they were kids.”